Paula Scher is one of the most influential female graphic designers of the late 20th century. Being mostly known for her album covers and posters; Scher’s work throughout her career has made an impact on young designers around the world and has become quite the inspiration. With her bright colors and bold font choices, her designs with be remembered for generations to come.

Paula Scher was born October 6, 1948 in Virginia and grew up in Washington D.C. Her father was a photographic engineer for the US Geological Survey.

Her father invented a device that would later ensure distortion-free aerial photography. This encouraged Scher to create some of her hand-printed maps. In college, Paula attended the Tyler School of Art in Pennsylvania. She there completed her Bachelor of Fine Arts in 1970. That was where she met her husband, Seymour Chwast. They met each other through an interview at Pushpin. In 1973, the two got married but divorced five years later. Nearly eleven years since the split, Scher and Chwast remarried in 1989.

After graduating college, Paula moved to New York City to start her career as a layout artist. Scher worked in that field for Random House’s children’s book division. In the early 1970s, Scher was hired at CBS Records in the advertising and promotion department. She worked there for two years and left to pursue something more creative.

She landed a job at Atlantic Records; a competing label with CBS Records. She quickly became the art director of the label and was soon designing her first album covers.

After gaining her experience doing album covers; Scher came back to CBS as an art director for the cover department. She then spent eight years at the label where Paula created some of her most iconic works, such as her album covers for the band Boston, Eric Gale, Bob James, Roger Dean, and many others. Her works started to recive recognition and were later nominated for four Grammy awards. A few years later, Scher left the company to do some work on her own. Around this time was when she really began to develop her typographic style. Paula Scher drew a lot of her inspiration from the styles of Art Deco and Russian constructivism.

After working on her own for two years; Scher co-founded Koppel and Scher with fellow Tyler graduate, Terry Koppel. Their partnership lasted seven years. During this time, Paula began designing packaging, book jackets, logos, and advertising which includes one of her famous works of that time. The Swatch poster she designed, was based on the famous work by Swiss designer Herbert Matter. Sadly, Koppel and Scher suffered from the recession and caused the two to go their separate ways. Koppel soon then became the Creative Director for the Esquire magazine. Paula started consulting with and then later joined Pentagram as a partner in their office in New York. Since then she became the first female principal at the New York office of the Pentagram design consultancy. Soon after, Scher later became a design educator at the School of Visual Arts in New York. She received over 300 awards for design associations from all over the globe as well as prizes from the American Institute of Graphic Design, The Type Directors Club, and many others. She was then able to become a select member of Alliance Graphique International. The work she did there was then included in collections of the New York Museum of Modern Art, the Library of Congress and others. Not only does Scher create graphic art, but she also enjoys painting in her free time. A majority of her paintings are of giant maps of different places.

These maps are covered with hand-painted labeling and other information. One of her biggest pieces was her map of the earth. The colors are bright and the whole piece is covered in words. In 1994, Paula Scher became the first designer to create a new identity for The Public Theater. This became a turning point for identy in designs and would influence a lot of the graphic design created for theater and other cultural institutions. Throughout Scher’s career she contributed to numerous issues of print, and to the Shakespeare Festival in Central Park. It was the first poster campaign for the festival. This design laid out the foundation for a new identity and visual language for the Public Theater. These designs could be seen across New York. From buses to subways to billboards. Scher’s design for this event was everywhere. In 2001, she did some interior design work for the New Jersey Performing Arts Center. She wanted the design to give people a sense of joy as to represent the shows that performed in the theater. She included tubes, balconies, and different words that ran along the walls of the space. Scher was then asked to create a new logo for Windows 8. Paula was confused as to why the logo was a flag and decided to take the logo back to its roots as a window. She wanted to make sure the logo didn’t come across stagnit. To address this, Scher had the logo at an angle to where it gave the inution of reciding into the background. This design worked better for the brand as their name was first used as a metaphor for seeing into the computer screens.

Paula Scher’s design style is very much her own. Her style of design communicates with contemporary audiences through her use of pop iconography. She draws a lot of her inspiration from Russian Constructivism and Art Deco. What makes her work stand out is the fact that she knows the business. Scher is a strong believer in individual effort and personal motivation. She insists on emotion in her work. Therefore, her style varies as opposed to a single design style. A majority of her work however is big and bold. With the uses of yellows and reds, it certainly grab your attention. The font type she uses is bold as well. In some of her most famous posters, you can see she uses and bold typeface to get off the most impact. Scher also believes in the experience of a design rather than the process. This ensures she doesn’t get bored with her work or hits a wall.

Paula Scher’s album cover for the band “Boston” has to be one of her most famous works. The cover takes place in space using black with some red undertones. UFOs are the focal point of this cover, but they do not look like ordinary space crafts. Scher designed them to be in the shape of acoustic guitars. One being in the middle with the band’s logo in the top. Blue flames are seen coming out of the guitar’s center with highlights and shadows to give the flames some dimension. Towards the bottom of the piece there is what appears to be a meteor. It is shown exploding with light glowing around d the dark mass and slowly getting darker as the light moves further from the meteor. The Boston logo on the guitar is yellow as a way to draw you in. If you look above the logo you will see a city scape that appears to be inside the guitar spaceship. Going by the name of the b and we are led to assume that the cityscape is to represent the city of Boston. The color pallet of this piece isn’t too broad. With the yellows, reds, and oranges bring a warm feeling to the piece; in contrast, the blues and the touches of purples help create contrast in this piece.

When I decided to do Paula as my topic for this project, I knew exactly what piece I wanted to analyze. I am a big music fan. Music for me is a way of escape from all my responsibilities and troubles of my life. I just knew I had to do the Boston album cover. I was first introduced to this work while watching a documentary on Netflix about graphic design. Paula was one of the artists featured and that was when I was the album cover. I very much love the concept of this design. It is very out of the box and very different especially considering the time this was designed. I very much enjoy the colors of this. The dark background isn’t too dark, but just enough as to not distract from the spaceships. The idea of using guitars as spaceships in genius to me. It is something that hadn’t been done before and it was excited very well. She didn’t get too crazy with it though.

Paula kept it pretty simple with the ships as far as the design of the guitars. As I look at this work more closely, I can see that the exploding ball I thought was a meteor, now looks like it could very well be the planet earth. Now knowing this I can see that there is a story to be told in this design. The spaceships could be evacuating the cities to another planet as ours explodes and comes to an end. It is certainly interesting to try to figure out. If I had to choose and favorite part, it would have to be the blue flames. I love the contrast it gives next to the black background and the warmer hues of the guitars and the earth. Every time I look at this work my eyes always got to the flames first. I love the simplicity of the shape and yet it is so powerful.

In conclusion, Paula Scher is a unique graphic artist and one of the most flourishing women in her occupation. Scher has created such an impact using her emotions and her experiences in the work that she does. Over time she has diversified her work through understanding her client and not being afraid to go bold. She stands out in the male-dominated industry and is an inspiration to me. I can only hope that one day I will be half as successful as her. 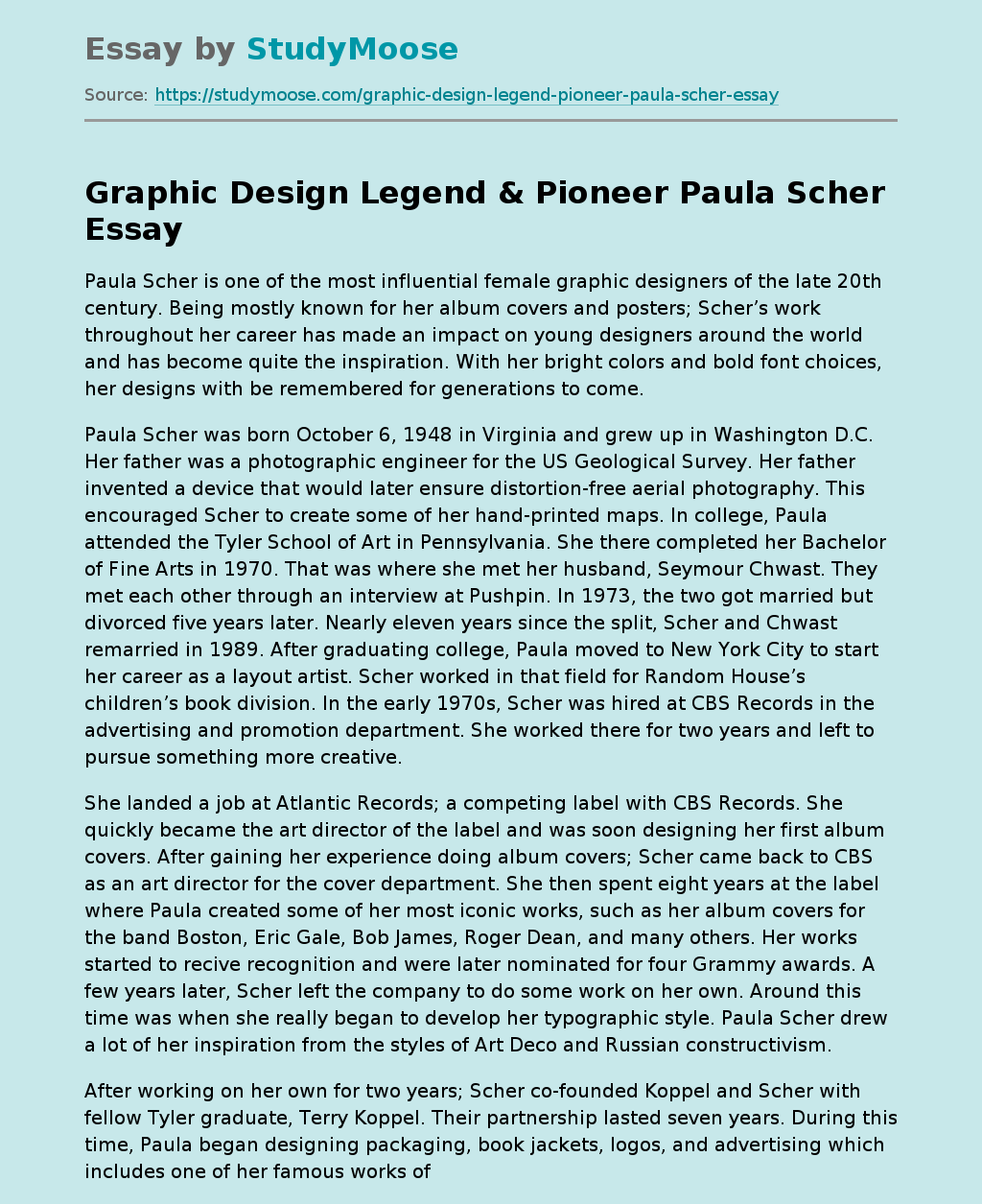