Postmodern graphic design is one of the most prominently cited trends in the fields of advertisement and design from 1960s to 1990s. However, most critiques from modernist groups initially denied the existence of this trend. Through the different movements established during these years, such as Punk movement, pop culture movement and Dadaist arts, postmodern art has evolved well enough to be popularized globally by different designers.  In the findings of the study, prominent individuals following the postmodern trends, such as David Carson and Wolfgang Weingart, possess almost similar strategies (e.

Don't use plagiarized sources. Get your custom essay on
“ Postmodernism in Graphic Design ”
Get custom paper
NEW! smart matching with writer

g. Context deconstruction, etc.) and characteristics in forming and conceptualizing their own versions of graphic illustrations.

a. Problem and its Background

Barnard (2005) identifies postmodernist graphic design with its revelations of social, political and cultural aesthetic movements referring to the actual experience of living in a specific society with particular form of politics at a particular period of time (138).

The idea of postmodernism is definitely the “globalizing post-industrial world of media, communication and information systems (Thomas and Walsh cited in Barnard 138)” that is clearly the antagonist of the idealist and centralized movement of modernism. The idea of postmodernism illustrates the undistinguished new wave of the 1970s wherein most critiques (e.g. Henderson, Heller, etc.) contend its imaginary grounds or inexistence in society. According to Heller (), postmodernist graphic design has actually began in the outskirts of professional modernists unnoticed or rather ignored (9). This event has caused debate in the field of graphic designing, especially in the political ideas, attitudes and liberalism of graphical arts inclined to the societal trends of 1970s westernization.

In the 1970s until early 1990s, the existence and influence of postmodernism have been frequently denied by critiques of society; however, as the 21st century approaches, postmodernism has become manifested in its undeniable prominence channeled through the support of the public and innovative forms medias, such as advertisements, magazines, graphical arts, etc. According to the analysis of Poynor (2003), postmodernism exemplifies the concept of breaking from the societal norms and standards to freely expose or reveal the artist’s own expressions of art (10). Postmodernism in graphic arts are present among graphical designs, television, media advertisements, magazine and other published materials, fashion trends, etc. As supported by Barnard (2005), postmodernism denies the common precepts of society’s norms and standards imposed most commonly in conservative forms of art (140).  Various proponents of postmodernism in graphical design have their own historical significance in setting these forms of design in society.

In this discussion, the principal center of involves the validation of postmodernism’s existence and dramatic influence in the field of graphic design and the different contributors of this trend. Throughout the discussion, different proponents of postmodernist graphic designs are critically studied and analyzed according to their significance and contribution in postmodernism graphical design. At the end of the study, the following questions are answered according to the results of the study:

· How did the concept of postmodernism influence the trends of graphic design?

· What and who are the different proponents and contributors of postmodernists in publishing, advertisements, graphical arts and design?

· What are the most commonly cited differences of modernist and postmodernist idealism?

· What are the components the contributed to the rise and popularization of postmodernism in the fields of graphic design?

a. The Concept of Postmodernism

Postmodernism graphics revolve mainly in the idea of art as the next wave of societal evolution after the modern industrial age in the 1970s and 1980s. According to Bennett and Heller (2006), the advent of postmodernism and its advance in society are brought by two contributing historical events, namely (1) technology and globalization, and (2) the post impacts of 20th century wars (e.g. Vietnam wars, Weapon Disputes, etc.) (352). Graphical representations during the postmodern era are identified through representational images of space, technology, violent wars and weaponries, and details of political symbolisms. In the aspect of representational patterns, postmodernist graphical designs are commonly structured using semi-blurred imageries with varying definitions of details and symbols (Poynor 15).

The traces of postmodernism in the past can be identified in the 1980s style repertoires of Wolfgang Weingart (1941) with his Swiss Typography of Monatsblätter (1972), Rick Valicenti’s auditory typography, and other early designers (Jobling and Crowley 271). Postmodernist graphic designs possess multi-layered compositions of emphatic bitmaps and skewed images far more detailed than those of minimalist and conservativist compositions of modernists. According to Heller and Ballance (2001), postmodern graphic designs are derived from the multivalent character shifting from oppositional images to formal concepts of art embedded with deeper sense of meanings and symbolisms (10).

Added by Jobling and Crowley (1996), “the singular avowal of clarity and simplicity in modernist design has been overturned by the postmodern fascination with complexity and contradiction, decoration and ornament (272)”. Nevertheless, the characters of postmodernism acknowledges the many aesthetic contents of the modernists, such as Heartfield, El Lissitzky, van Doesburg, Mies van der Rohe, etc., with their declarations of absolutism and complex illustrations of social reforms.

According to Bierut (2001) of the American Institute of Graphic Arts, the modernist artists have contributed the concept of “no-rule” designs among the younger generations of designers who eventually have reinforced the development of personal voice or agenda as an important perspective in fields of postmodern graphical designs (60). Postmodernist graphic designs are much more open, diverse, inclusive and innovative as an outcome of periodic challenges in visual communication and new existing design approaches (e.g. Vernacular Arts’ anti-professionalism, Virtuoso’s digital arts, etc) (Poynor 17). The complexities of structuring postmodern graphic arts are poised definitely with detailed designs radiating the designer’s commanding sense of expertise.

In graphic design, postmodern ideology is considered more feasibly as an attitude application with lesser grounds on style and artistic representation. According to Heller (2002), “postmodern graphic designs describe a reassessment and revival throughout art and design of historical and vernacular styles, and materials formerly rejected by modernism and outmoded by fashion” (21). Modernist graphical designs are most commonly imbued by culturally referenced symbols applied in photography, film, advertisements and iconic graphical arts. Although, modernist designs also utilize history or event-based concepts of art similar with the characteristic of postmodern graphical arts. However, the new wave of post-modernism is rather radical, aggressive and more subversive against the holy grid of modernism (Fiell and Fiell 28).

Graphical representations and imageries involve properties of abstracts and psychedelic illustrations, which are commonly referred to as Punk designs (Heller 22). In this trend of design, formalism has been stripped off while preserving the design’s intelligence, humor, and geometric dingbats and ornaments. Postmodern graphical designers, such as Jav van Toom (1932) and April Greiman (1948), have distorted the objectiveness of modern graphical designs transforming these to the subjective visual sense of postmodern graphical designs. According to Fiell and Fiell (2003), postmodernism has expanded visually arresting, layered-based compositions, and indecipherable forms of design, which consequently increased both supporting and criticizing parties (30). Nevertheless, the main idea of postmodernism has remained as the no-rule art with applications of expression-based art and ideologies.

Transformation of graphical design from modernist to postmodern perspective in the United States, specifically in Chicago and Los Angeles, occurred early in the 1950s but came in more prominently around late 1980s. Graphic design movement is in United States have been initially pioneered by two prominent designers, Michael Vanderbyl (1947) and Michael Manwaring (1976), who were in fact influenced by the pop culture established in San Francisco (Heller 23). Postmodernism represents the demise of modernism’s extremism ideology (High and Low culture) with partial touch of tradition.

According to Poynor (2003), the idea of postmodern graphics has been associated to several descriptions, such as freewheeling, pop culture, electicism and others (18). Postmodern designers have opened their insights to different possibilities of abstract-based and psychedelic versions of modernistic forms of designs introduced in various forms of media.  According to Buchanan (1992), postmodern designers have instituted the ideas brought from liberal versions of art and unusual subjects, such as sex, violence, liberalization, modernism and globalization. New wave forms of designs have aroused the versions of Vernacular Arts and Digital Age designs.

Vernacular forms of art have been processed by different movements of postmodern designers of 1970s and 1980s. The idea involves the representations of illustrative designs and witty juxtaposed content that instills the characteristics of simplicity, expressionalism and contemporary colors (Heller 24). The three Influential movements of these postmodern graphic designs are (1) Punk Movement, (2) Pop Culture Movement and (3) Dadaist Art Movement. 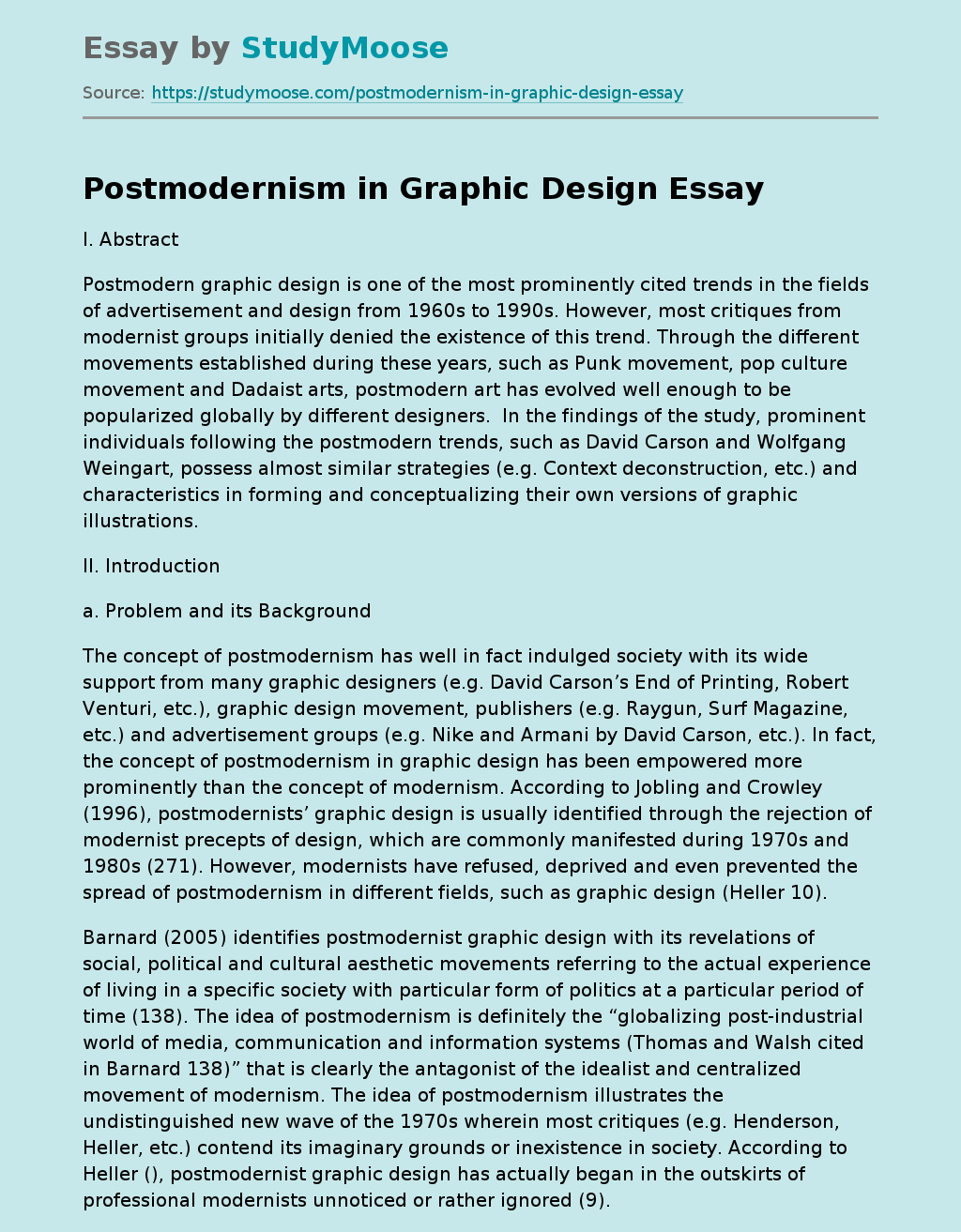