What Impact Have Digital Technologies Had on the Graphic Design Industry?

Don't use plagiarized sources. Get your custom essay on
“ What Impact Have Digital Technologies Had on the Graphic Design Industry? ”
Get custom paper
NEW! smart matching with writer

This paper will expose the relationship between developments in technology and their impact on graphic design.

In today’s world technology is playing a major part of people’s lives, either as a socialization tool or as a working tool. For example, some people get seriously stressed when they cannot access the Internet and a majority of people confess that technology has had a great impact in their lives. Technology has had both positive and negative impacts on graphic design.

On one hand, it made it easier to do the work due to technological innovations such as printers, scanners, the Internet and designing program but on the other hand it has killed creativity with applications such as Photoshop, which are now replacing the old tradition of originality, skills and ideas. Too much dependence on technology has made many graphic designers slaves to technology and many are now not concerned about originality, good judgment and hands-on experience.

Some of the graphic designers who support technology argue on the contrary that advanced design software enables them to save time by allowing them skip some of the steps involved in manual design process such as old copy, stripping and past.

They also believe that technology has brought about a shift in the creative process, as graphic designers now create designs using technology, compared to designers in the earlier days that carried out the same creation but using traditional methods.

In the earlier days, graphic designers used simple tools and equipments such as rubber cement, kneaded erasers, proportion wheels and the broad tape to create graphic designs such as posters, logos and simple adverts. “Woodcut” was one of the earliest techniques of printing which was used to print patterns onto cloths. This technique was widely used in Far East but later in the 5th century it was introduced into China where it was used to print texts and images onto paper. The next major development of technology occurred in the 19th century when chromolithography was put together.

Chromolithography was the most successful method of color-printing developed (Lupton). Later in the same century offset printing was discovered. This technique enables the image carrier to link the image only to the ink and ensure that other parts are left ink-free. In the 1960s, an American company called Xerox came up with the photocopier hence doing away with the traditional methods of reproducing documents such as the use of carbon papers (Heller). The next big step in technology development came in 1969 with the discovery of laser jet and by 1981 the printer was released for mass marketing.

Modern technology created the Corel PageMaker, which is a computer application that started a dramatic revolution in the graphic design process, which did away with aspects of graphic traditions such as desktop publishing. This drastic change in tools used in graphic design changed the field into a technology-heavy field. The discovery of the computers made the process of graphic design even easier. Some of the computer applications such as fonts, font sizes and leading options made the process of typesetting much simpler.

The Internet application further made the process easier since designers could send their graphic designs to customers and get their approval or feedback almost immediately. One designer can brief and answer a client in a fraction of the time that could needed to gather a whole team for such a briefing (Lupton). Through the introduction of graphic design software called QuarkXPress, which replaced PageMaker, graphic designers became more in control of their graphics. Ten years after the introduction of QuarkXPress, Adobe released graphic design software, which was known as InDesign, which was widely accepted.

Due to the accessibility of these applications, it is now easy for anyone to obtain them and create their own designs. Technology has had a great impact on the everyday life of many people. Majority of people are now relying heavily on technology such as the Internet for both social and economic activities. For example it is now much easier to obtain information from the Internet with only one click of the button. Individuals also use the Internet to connect and communicate with others from all over the world.

Due to this many news companies are experiencing a drastic decrease in the demand for their services or products such as the newspapers which are now available online on a daily basis (Song). However, technology is not all negative to news houses since it has also made it easier for them to obtain fresh information as soon as it occurs. One of the greatest negative effects that technology has impacted on the society is the breakdown in communication. Even around a family table, it is now common to find each individual glued to the phone or computer screen without exchanging any words with each other.

The lack of communication has made many people anti-social, as they never go out to meet their friends but prefer to interact with them online. Besides this negative impact of technology that has encouraged laziness, the positive side of this is the fact that it is now possible to communicate with people from all over the world with just the click of a button and exchange both social and work-related ideas. In the graphic-design industry, technology has had both positive and negative impacts just like in the society.

For example, technology saves graphic designers a lot of money, time and health risks, as compared to the earlier days when a lot of time and materials such as paint and brushes had to be utilized so as to come up with a graphic design. Technology has also made it easier for graphic designers to communicate with their clients easily through the use of electronic systems. Technology applications such as the Internet have also enabled designers to hold briefings with their potential customers and be able to demonstrate their designs and respond to any questions that the customers may ask (Song).

This was not the case prior to these technology advancements where graphic designers had to assemble a conference so as brief one client. Graphic designers can also put up their designs on blogs and get opinions from different viewers, including their family and friends. This helps them to spot faults that could not have been identified and therefore make corrections to better their work. Advanced computer applications have become of great assistant to graphic designers as the programs automatically complete some of the steps in the design process. These type of applications save the designers a lot of time.

However, critics have argued that the overreliance on technology is killing critical thinking, creativity, originality and other positive aspects that were associated with traditional graphic design process. Nowadays even a quack can make use of graphic-design applications that are widely available to create their own documents. Other technology applications such as Photoshop have killed originality completely since the only thing one needs are parts of someone else’s pieces of work which he/she then cuts and pastes to come up with ‘their own’ graphic design Woodford). The lack of originality is slowly turning the Internet into a junk of the same pieces of information written in different forms, lacking diversity and fresh thinking. Digital technologies have had both positive and negative impacts on the graphic design process according to the varying opinions. On one hand, technology has made it easier for graphic designers to show case their designs to potential clients through the Internet and answer any questions they might have (Heller).

Through electronic communication only one designer is required to brief a potential client. This was not the case before when many designers would be required for just a single presentation. On the other hand, technology has had a negative impact on the process of graphic design mainly due to the over reliance on technology, the concept and tradition that encouraged originality, critical thinking and experience are slowly being done away with. It is now possible through technology developments such as Photoshop for any untrained graphic designer to create his own documents.

What Impact Have Digital Technologies Had on the Graphic Design Industry?. (2016, Oct 11). Retrieved from https://studymoose.com/what-impact-have-digital-technologies-had-on-the-graphic-design-industry-essay 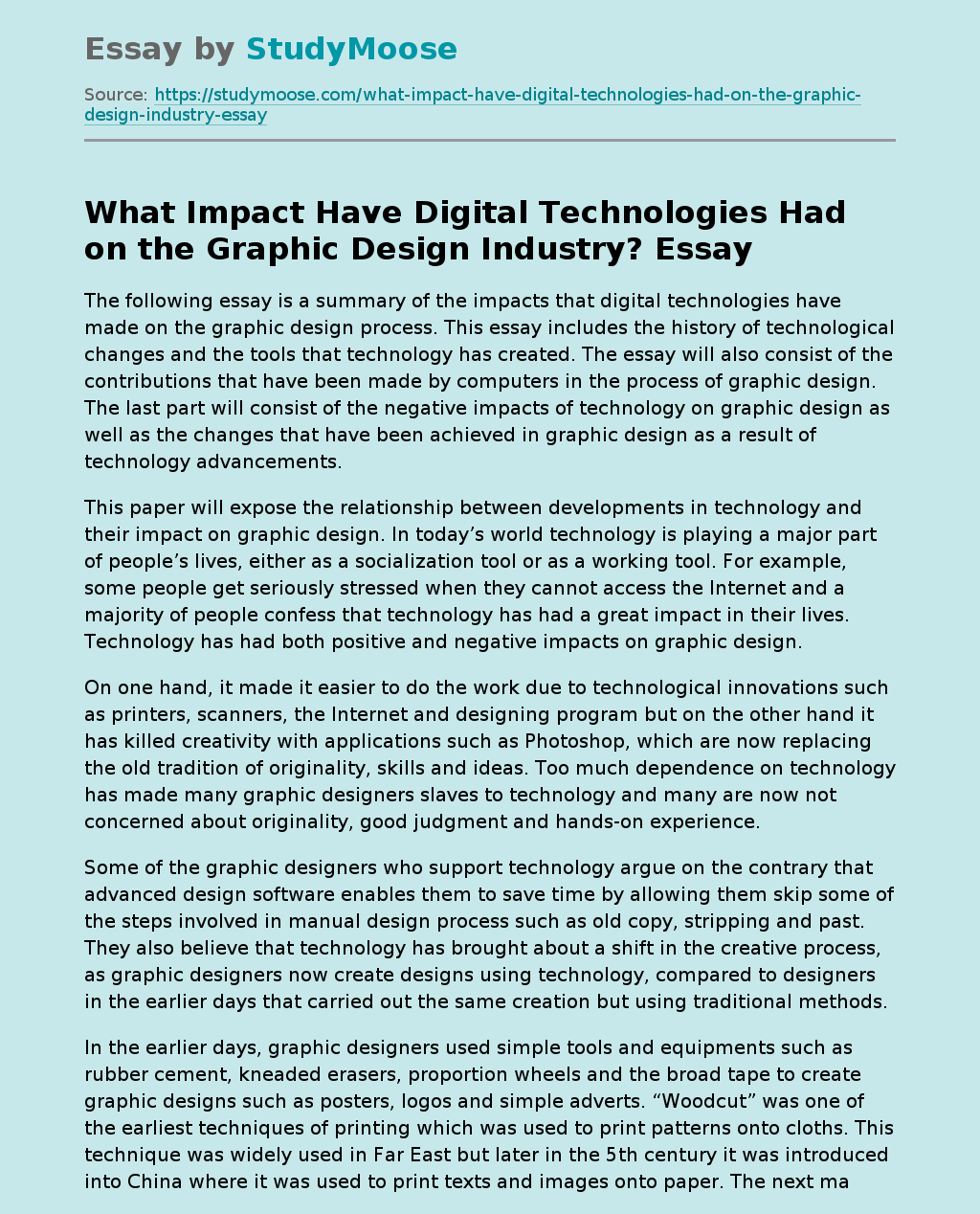