What impact has study into perception had on the nature nurture debate?

This pursuit may initially appear to be pedantic, one could argue philosophically that the presence of perception is enough why does its point of origin matter. The truth is reality is governed by perception, if you cannot perceive it then in your reality it does not exist. In order to better understand ourselves, we must discover what we are and what we are made to be. Sensory perception is our conduit to the world around us; to understand how it is influenced doesn’t only explain perception but also the nature of nurture itself.

Don't use plagiarized sources. Get your custom essay on
“ What impact has study into perception had on the nature nurture debate? ”
Get custom paper
NEW! smart matching with writer

This essay shall attempt to address the impact that psychological experiments have had on complimenting the claims of nature or nurture within visual perception and its development. The terms of nature and nurture shall then be given the following criteria. Nature, what will occur or develop in an uninfluenced state. Nurture, what will occur or develop under the presence of influence.

The region of sensory perception is tangible; it differs from some other nature nurture debates within psychology that may relate to immeasurable variables such as feelings.

In this area physiology can lay a template explaining biological factors involved in these processes.

Whenever an experiment is conducted relevant information pertaining to the area of study should be considered. So what is known about the mechanics of visual perception?

Through developments in neuroscience and animal experimentation certain discoveries have been made to explain the how aspect of perception. Visual information processing is the result of two distinct pathways; each pathway contributes information in different contexts.

So the pathways have been mapped but that is not the only contribution that physiological research has to contribute to the topic.

Why can’t you teach an old dog new tricks? Plasticity. In effect stages of plasticity dictate the deadline by which skills must be obtained, this explains the when element of perception. During these stages the brain forms its repertoire of tools to cope with any situation that may be encountered.

What is the result then if a sensory skill has not been developed?

This question was addressed by Gregory and Wallace (1963) – S.B. a case study of an individual whom had led a life without sight for 52 years, at which point he underwent an operation to awaken his visual senses. The study of this man gave an insight into perceptual cross-over, where the subject had led a productive and fulfilling life using sensory perceptions that had been established and honed throughout a life-time. S.B. had been a successful blind man; this new perspective had an adverse affect on his psyche. He took several days to gain acuity with his sight, and at first enjoyed the benefit of experiencing vibrant colours.

Problems arose when his expectations of a perfect world were not matched. He had through nurture of other senses established an idealistic perception. His confidence diminished in aspects such as crossing roads, he had previously not perceived this activity as a dangerous objective. Although he gained his sight he would constantly refer to his other senses to make sense of things. Using knowledge gained from touch to understand his environment. Subsequently S.B became increasingly depressed and gave up active living dying three years later.

Why is this case study important? It signifies a need for perceptual shaping to adapt to an environment. Also it reflects how perception can be artificially constructed; this study strongly supports the claims of nurture being prevalent in perceptual development. In terms of measuring natural perception the case study of S.B. would not have been viable.

What aspects must be considered when attempting to observe natural perception through experiment? the first and foremost factor is that of the subject and the level of nurture that said subject has experienced, to assure fair test results these subjects must have minimal nurtured influence. The fact that nurtured response would misrepresent natural perception signifies a problem. Best fit is the compromise, as all life will experience nurtured influence; even in the womb there may be factors that cause perceptual shaping.

This best fit subject would then be the subject that had the least possible experience of environment; the newborn infants of a species are therefore the best candidates for experimentation.

the reason for infants as the prime source for study is not solely due to their limited nurtured factors in visual perception, of equal relevance is their lack of influence in all other fields of perception; reducing preconception through other nurtured sensory perception. There are however drawbacks to using infants in experiments, primarily limited measurable response and feedback.

Have any experiments been conducted to support theories of natural or nurtured perceptual development? Fantz (1961) face stimuli experiment suggested evidence in favour of naturally developing perception. The preference method was applied for this experiment; the time each subject spent fixating on different images was measured and recorded. This study was cross-sectional as the combinations that the figures were displayed in were varied. The subjects were infants ranging in age from just four days to six months of age.

Visual stimuli were presented in three forms. The first stimulus was an image of a face. Secondly an image of the same face with the features scrambled into a disorganised state. Finally an image with the same outline and the same colour present, only the image was divided into two solid blocks of colour with no features.

So what was this experiment trying to display? The goal was simply to display a natural or innate preference for the human face. Frantz concluded that infants did indeed show an inclination toward the facial images.

How was this information received by Frantz psychological peers? As in most cases there was support, with some criticism. Critics suggested that there was not a large enough difference between fixation times in the first two images to suggest innate face recognition. Others stated that it was merely due to complexity of the image that had caused infants to fixate on the first two images.

What theories attempt to explain perception in terms of nature or nurture?

Extreme nativists and empiricists both claim validation through various experiments. There are two realms that can contribute to perception, these being external stimuli and knowledge obtained through experience of stimuli. The task that perceptual experiments seek to accomplish is proving which of these contributing factors account for development.

What impact has study into perception had on the nature nurture debate?

Research moves knowledge on; perceptual experiments have helped to identify cultural differences due to variations in nurture. Restricted nurture within key stages of perceptual shaping, has proven an inability to form an understanding of that which was restricted. Study into perception has most prominently revealed the natural inclination for adaptation, and the intrinsic ability to build coping mechanisms to function within our environment.

Nativists may take the stand that people perceive, they have the tools for the job at birth. Empiricists could then argue that which we perceive is environment. It would be ludicrous to discount what is perceived in the shaping of how it is perceived. The presence of optic nerves, memory and intensive computational ranges of the brain, affords the suggestion that nurture is a key exponent and the probable path of natural development. After all we are all products of our own nature but we all reside in nurture.

What impact has study into perception had on the nature nurture debate?. (2020, Jun 02). Retrieved from https://studymoose.com/impact-study-perception-nature-nurture-debate-new-essay 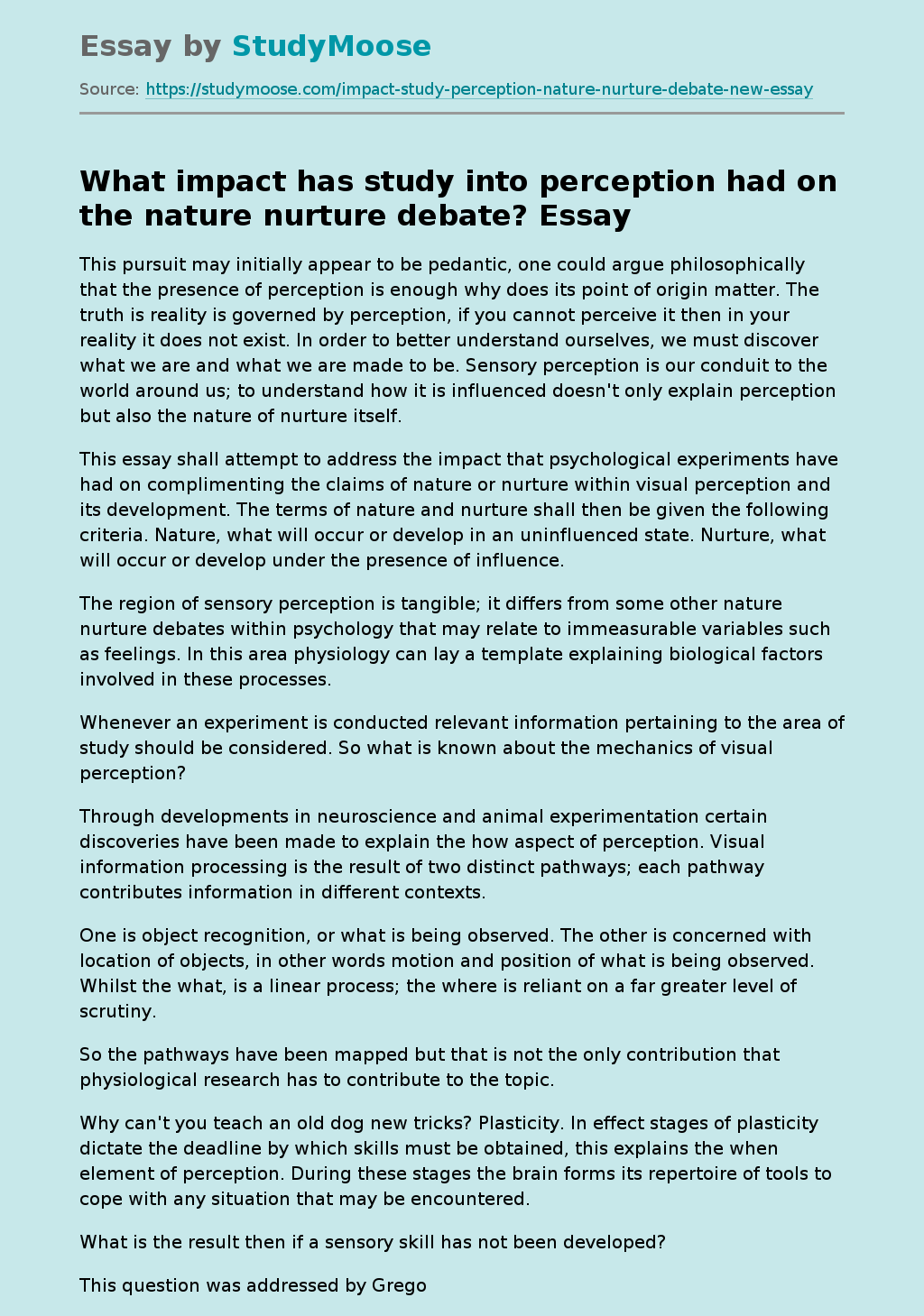