Short stories often develop a theme in a short time frame. Their authors must do this with limited settings and characters. The short story Killer, written by Paula Goslings, contains many themes with the main one being deception. One of the ways the author expresses this is through the narrative convention of style or mood. In this piece the convention of plot is also utilised by the author to develop this idea. Characterisation is another narrative convention successfully utilised to explore this theme.

Don't use plagiarized sources. Get your custom essay on
“ The Short Story Killer Review ”
Get custom paper
NEW! smart matching with writer

By themselves these elements are nothing, but when together, they effectively portray the theme of deception in the fantastic short story Killer. The narrative convention of style or mood is a major component which represents the theme of deception. This refers to the way the text is written, which is one of the main features that informs the reader as to what kind of person the main character is. If written in third person, style or mood gives the reader a sense of what the narrator is like.

Often, this convention influences the story, for example; if the mood is dark, the plot cannot have the main character riding on a unicorn, it would not make sense. The style or mood of Killer is very dark and gruesome. This is because the main character is a cat that murders rats and eventually kills a neighbour’s budgie. An example from the text which tells the reader about the style or mood is, “she twisted and turned and struggled but he got her, he finished her.

” Another sentence which expresses this is, “he kept himself to himself and so did his women”.

Without this crucial element, the story wouldn’t be the same as this is the foundation to the text. The most crucial element which expresses the theme of deception in the text is the narrative convention of plot. This is the most important component of the story, as it is exactly that, the story. Everything that happens is part of the plot, from the introduction to the climax to the resolution. Basically everything the characters say or do is part of the plot. The storyline of killer is very hard for the reader to understand as they are made to think the main character is a human hit-man, when it is actually a cat.

One sentence which makes the plot so confusing is, “No other self-respecting cat would have put up with that dammed budgie staring and screeching at him for another single day”. A second sentence which confuses the reader is, “standing, staring and pointing at a scatter of green and blue”. The plot of this story is very intriguing and this is what keeps the reader attached to the story. They have to keep reading, they just cannot stop. The third and final narrative convention utilised by the author to express the theme of deception in this piece, is characterisation. Without this crucial aspect the story would be lifeless.

This is what gives characters detail and personality. If the text didn’t have this convention, it would only be a plot not a story. In Killer there are not many characters, which gives the author a long time to describe them, not just physically but emotionally as well. The main character is depicted as a person who is secretive and suspicious; he does not want to bring any work home with him. The story is deceiving because the leading character which is a cat, is given human traits. A sentence which shows this is, “nobody knew his business. He kept to his routine, was always well mannered when he met one of them on the street”.

Another example is, “he was an expert. He had a reputation downtown-where a reputation counted”. A third sentence which gives the main character human traits is, “he was the one they turned to when some little rat fink squealed once too often” . This might not be the most important part of the story, but without it, it just would not be the same. It would just be an ordinary story. Alone, these elements serve no purpose, but together they turn Paula Gosling’s ordinary short story Killer into a brilliant, fantastic, suspense story with a twist. This happened because the author expressed the theme of deception using conventions.

One of the narrative conventions she used was style or mood, which is the way the text is written. The story also expresses the theme using the convention of plot; this is everything that happens in the story. The third and final narrative convention used to illustrate deception is characterisation; this is giving the characters detail and personality. This story is fantastic because the author used narrative conventions correctly. She made the story deceiving, which is what kept the reader interested until the very end. Remember, never judge a book by its cover. 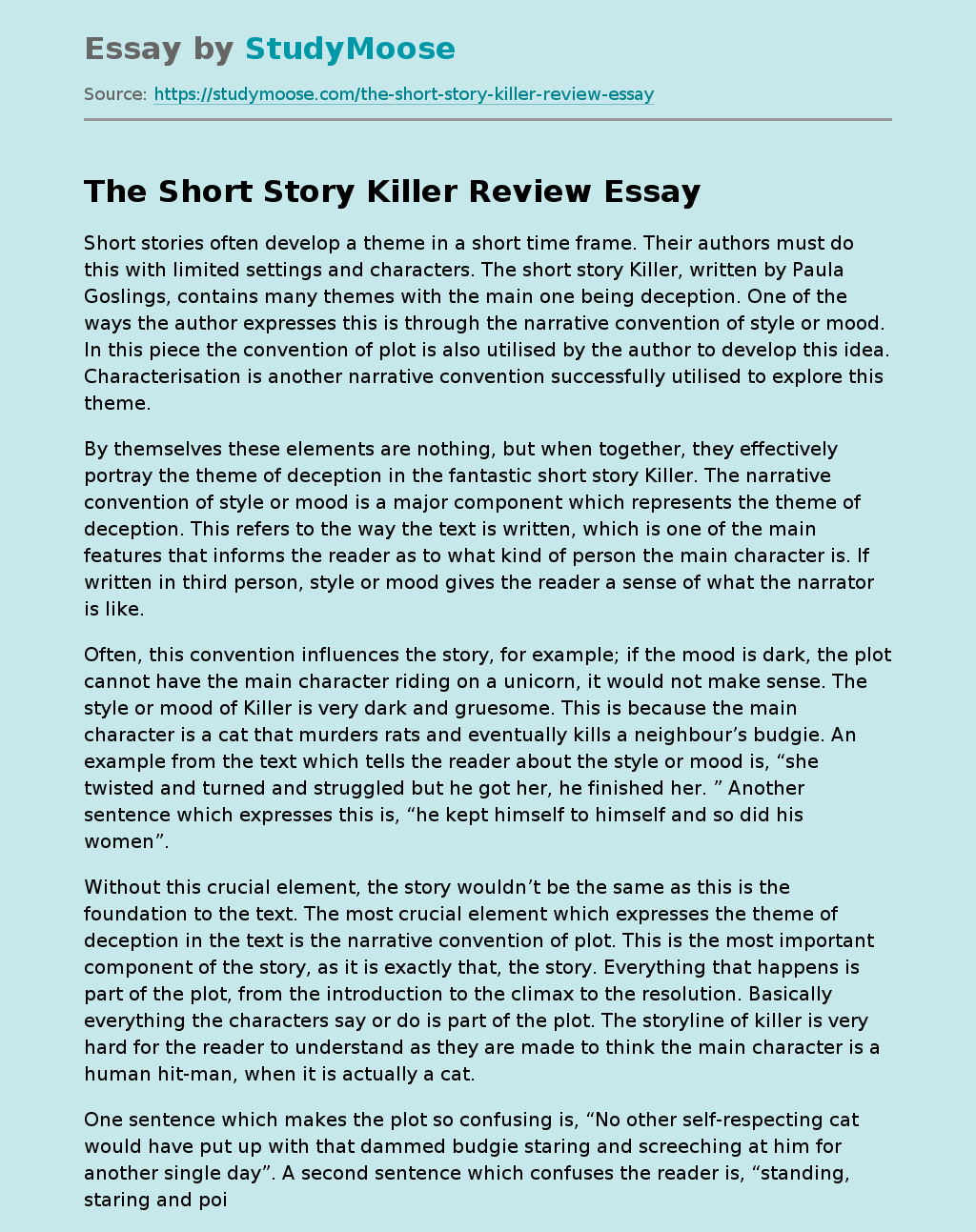