Feng Shui in the Home

Feng Shui, as a part of the Chinese culture, is considered an art and a science of how the chi or energies that exist in spaces of nature are to be placed or positioned in order to nurture productivity and the flow of positive forces that influence the quality of life of human beings. Feng Shui, which literally means “wind” and “water” in the Chinese language, looks at all the features of the earth as constituting one of the five elements – earth, fire, water, metal, and wood.

Turn in your highest-quality paper
Get a qualified writer to help you with
“ Feng Shui in the Home ”
Get high-quality paper
NEW! AI matching with writer

Moreover, Feng Shui follows the traditional principle of the Yin and Yang which suggests two opposite aspects of life that are complementary to each other which sustains the flow of balance in the world and in life. (Allen) Feng Shui is put into practice through the positioning or ordering of objects or things in spaces or dwellings as a means of facilitating the flow of positivity and harmony through the guidance or assistance of a Compass specially designed for the purpose and the Bagua.

(Tchi) These concepts – the chi, the five elements, Yin and Yang, the Compass, the Bagua – and more will be explored in the remainder of this discussion. In Ancient China, dynasties or political parties applied the principles of Feng Shui in order to make decisions that positively affect harvests, wealth and the economy, the endurance of dynasties and political parties, and such. During that time, the art and science of Feng Shui was practiced by only selected educated individuals such as “scientists, architects, astronomers, and land surveyors” (Stohn, 1).

They were expected to apply Feng Shui principles by applying their sound judgments and reasoning guided by plans and estimates influenced by astrological signs and patterns. For instance, individuals who put the Feng Shui into practice may utilize the Compass or the “loopan” in order to determine areas that bring positive and negative energies to human beings who occupy particular spaces or rooms inside a house or a building. The use of the Compass is guided by the positions of heavenly bodies, such as the earth, the sun, and the planets in the solar system. (Stohn, 2-3)

The chi energy, or a life force that is known to be part of all the things and man, is the basis for the success of Feng Shui. According to Feng Shui principles, the chi should be placed in particular positions that will establish a flow of energy from all the elements surrounding man and himself in order to produce positive forces that contribute constructive and positive impacts to life. The role of interior designing in realizing the goals and objectives of Feng Shui is the practice of designing the internal components of spaces or dwellings in order to facilitate the continuous flow of chi or energy.

According to Feng Shui principles disharmony and negative energy exists when there are barriers in the surroundings that disrupt the flow of chi or energy. Basing it on the five elements – that is earth, fire, water, metal, and wood – barriers that cause disruptions are caused by the misplacement of interior components of spaces of dwellings violating the concepts of the “Cycle of Creation,” “Cycle of Reduction,” and “Cycle of Control or Domination.

” (Stohn, 6-10) These three cycles explain how the five elements affect each other, establishing the basis of how things in the surroundings should be placed in order to ensure that these objects or things, which all belong to one of the five elements are arranged in order to foster the harmony between them and not the opposing features that each element possess against other elements.

For instance, the “Cycle of Creation” discusses how each element gives birth to the other, such that fire is born out of wood, the ashes that come after the fire becomes part of the earth, some parts of the earth constitutes ores that are considered as metals, through the process of condensation, metals become water which nourishes the life of wood. On the other hand, the “Cycle of Reduction” and the “Cycle of Control or Domination” similarly discusses how one element cancels out the other, such as the water that relieves fire, and such.

(Stohn, 10-11) Interior designing in this case, considers the make or the composition of interior components of the home according to the five elements, and how they are arranged in order to follow the “Cycle of Creation” which facilitates the continuous flow of chi or positive energy. Another way by which the Feng Shui is put into practice through interior designing is by the utilization of the Bagua.

The Bagua is considered as a map of energy which directs interior designing into ensuring that the interior components of a space or dwelling coordinates the nine essential principles that brings about harmony and positivity within it. Interior designing through the use of the Bagua necessitates the consideration of the four directions – North, South, East, and West – and how the nine areas – courage, stillness, joy, receptivity, synchronicity, integrity, strength, gratitude, and connection – are inclusive in each designated position inside spaces. (Stohn, 11-15)

Some popular examples of interior designing techniques and practices that follow the principle of Feng Shui include the designation of areas that pertain to directions following the five elements in the surroundings. For instance, the North direction is designated to cover the area of career and business. The North is supposed to be a door or an entry way inside the home which signifies the entry of good career and the development of business. In order to sustain the flow of positive energy in the North direction to foster one’s career and business, this area or space should be free from clutter or dirt.

It should always be clean and decorated with new and shiny things or objects. According to Feng Shui, the North direction is also designated to the element of water. Therefore, it is ideal to place fountains, aquariums or fish tanks, or other decorations that connote the presence of water in them. This is followed all throughout the house, such that each area wherein a particular element is designated, things or objects in it should be made from such elements. (Stohn, 18-20)

Since the principle of Feng Shui constitutes the arrangement of things or objects in spaces or dwellings, it has become one of the most valuable, not to mention widespread, foundations of interior designing. The demand for interior designing practices that are based on Feng Shui principles has definitely contributed to its addition as a custom in the industry of interior design. The Feng Shui, as an Eastern art or science practiced by the Chinese, has successfully infiltrated the Western culture.

(Skinner & Price, 6) Popular personalities, such as the late Princess Diana, Prince Charles (Alexander), and Donna Karan, Betty Buckley, and Terry Sweeney (Stukin), have consulted Feng Shui experts for their interior designing needs and some of them have attested to the positive changes in their lives that have happened after following Feng Shui principles in their homes.

Feng Shui in the Home. (2016, Oct 08). Retrieved from https://studymoose.com/feng-shui-in-the-home-essay 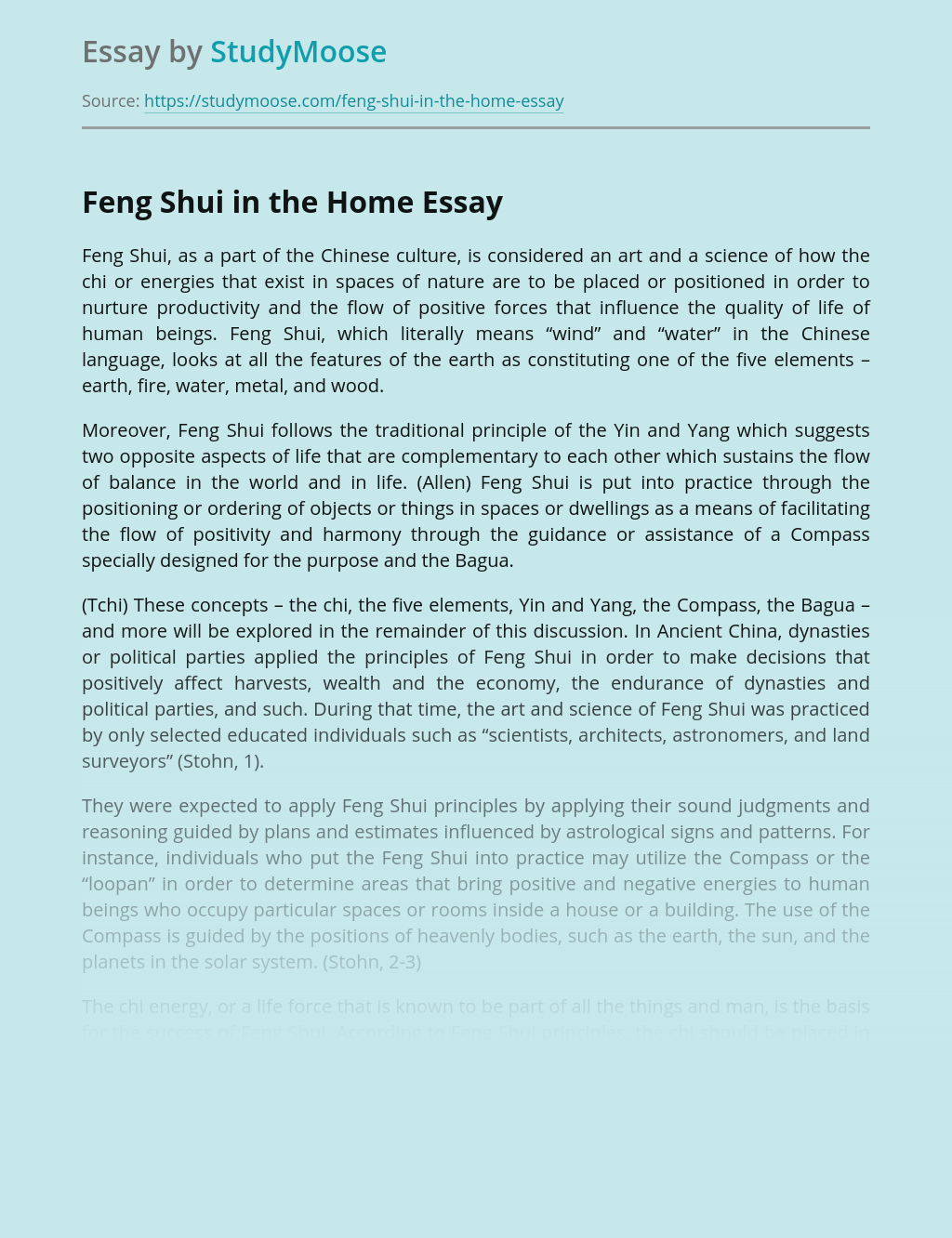 Turn in your highest-quality paper
Get a qualified writer to help you with
“ Feng Shui in the Home ”
Get high-quality paper
Helping students since 2015
Stay Safe, Stay Original