The Men of the Open Spaces

Identity is a very fundamental part of being Australian; it is a feeling of being related to a national group, specified by a typical heritage, which may be based on many qualities, consisting of race, territory, language and history. “The Men of the Open Spaces”, composed be Will H. Ogilvie addresses these problems of Australian identity, building an effective representation of the Australian ‘bush’ culture. The text utilizes past views of pop culture that are still common today, to construct a sense of national ideology.

Don't use plagiarized sources. Get your custom essay on
“ The Men of the Open Spaces ”
Get custom paper
NEW! smart matching with writer

The text focuses on an extremely conventional principle of nationhood and constructs a stereotypical representation of Australian culture. This essay will explore this in relation to the discourses of gender, class and environment.

The text focuses on a mainly masculine discourse by stereotyping the traditional bush ethos of Australia, while excluding females and other ethnic groups. The text uses the term “men with the sun-tanned faces” to enhance the white masculine culture of Australian ideology. The poem defines Australians as strong, rugged and really hardworking.

“The guys who have learnt to master the forces of fire and drought … and share the battle with fate” creates a picture of the Aussie combatant.

This representation of males is still thoroughly accepted in today’s society. The term ‘mate’, which is commonly utilized throughout the text, has a strong masculine emphasis to the Australian culture, omitting females from the image of the normal Australian. The bush values constructed in the text and the term ‘mate’ is an intertextual referral to the ANZAC’s and enhances the strong bonds (of mateship to protect each other) that are related to Australians.

The text highlights a mainly manly discourse that exists in Australian culture while excluding females and other ethnic groups.

The discourse of class focuses on the Australian culture and constructs Australia as an egalitarian society. The text is suggesting that Australians are very anti-authoritarian and like to have their freedom and individuality. This has intertextual reference to the first white settlement of Australian’s, where majority of the people where male convicts, who were under authority and had no freedom. Texts such as “the men who have stood together” and “holds a mate to his mate”, implies a value of mateship and unity which reinforces the egalitarian beliefs of Australians. Verse 4 constructs a royalty imagery of power and independence, showing a comparison of the Australian battler to what is considered an upper class image. It constructs Australians as stately and brave; standing alone in society.

The text “empire of his own” and “every saddle’s a throne” implies that the working class is the ruling class of society and money does not determine your status in society, rather how valuable your outlook in life is. Australian’s are strangers to airs and graces and scornful of power and pride. We live in a very classless society, and when we feel someone is a high achiever we show or feel contempt towards them, which is commonly referred to as the ‘tall poppy syndrome’. This idea is excluding wealthy or successful people in Australian society. Australian’s strong belief of egalitarianism and anti-authoritarianism are foregrounded with relationships to the discourse of class in society.

Australia’s environment is focused in the text and reinforces the traditional bush climate of Australia. Throughout the text, Will Ogilvie uses the term open spaces to create a pictorial image of the geographical landscape of Australia as very open and isolated. This has connotations of the historical context of bush and pioneering traditions of Australia. It also is an intertextual reference to Australia’s freedom. Verse two focuses on the harsh climate of Australia that predominantly men have had to endure (there is no reference to females in the text).

“Forces of fire and drought” and “the demon floods disaster” is an intertextual reference to the harsh, dry and cruel climate that are emblematic of the national identity. These texts, while creating a very dismal aura show that this is the true Australia that our egalitarian society has to endure. It also silences the urban areas of Australia, excluding the modern or materialistic aspects of Australia’s environment. The text constructed Australia as a very harsh and natural environment to highlight the relationship the environment has on the Australian identity.

“The Men of the Open Spaces”, focuses on a very traditional concept of nationhood, constructing a version of the Australian reality. The author constructs Australia as a predominantly white masculine society, while women and ethnic cultures are excluded. The text also looks into the traditional concepts of nationhood and constructs Australian’s as very egalitarian and anti-authoritarian society where everyone’s equal. This also has a relation to the term mate, which is used throughout the text to reinforce this unity and bond that Australians have.

The text excludes marginalised groups, foregrounding working class perspectives to create a pictorial image of the Australian identity. The poem also depicts Australia as a very open and isolated place and the harsh natural environment that ‘Aussie battlers’ have had to endure, which are all emblematic of the national identity. In conclusion, with the use of gaps and silences, traditional views and aspects of the Australian identity are constructed by reinforcing the values and beliefs that underpin the text.

The Men of the Open Spaces. (2016, Jul 20). Retrieved from https://studymoose.com/the-men-of-the-open-spaces-essay 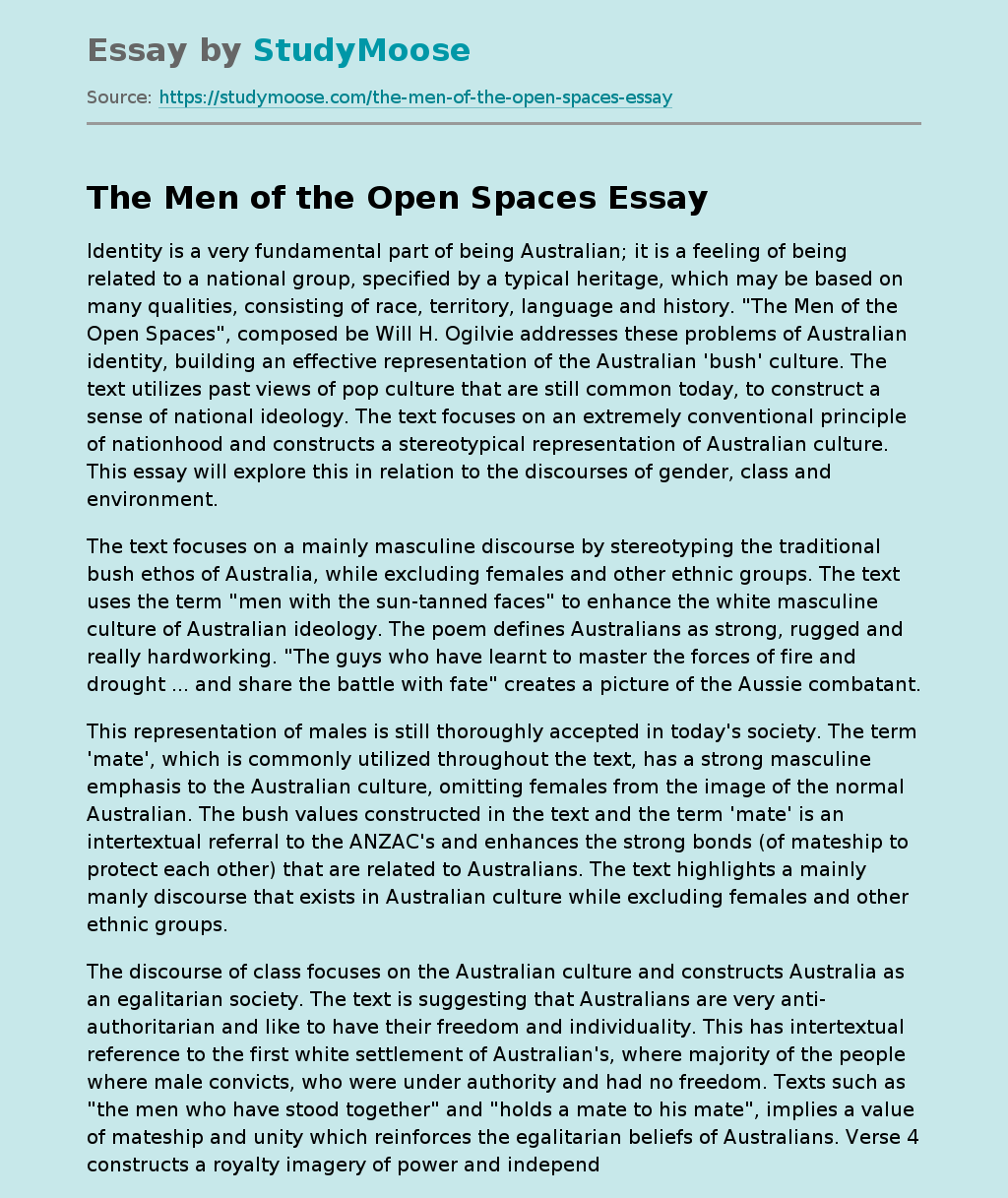