Don't use plagiarized sources. Get your custom essay on
“ Neorealist Aesthetics on Rome Open City and 8 1/2 ”
Get custom paper
NEW! smart matching with writer

This movement was branded ‘Italian neorealism’, and with its unique aesthetic style and themes it produced, arguably, some of the most influential films ever made. Neorealism was seen to be a perfect way for Italian filmmakers to portray the misery and suffering they, and the entire nation experienced throughout this period of repression. Martha Nochimson describes Italian neorealism as: A strong form of filmic poetry that aims for truth in its stories about the poor and the working class, without using the glamorizing techniques that Hollywood prefers, (that) can only be fully understood within the context of Italian social and political history.

Italian neorealism has distinctive stylistic qualities that give it an almost documentary, ‘newsreel’ feel to the films. Neorealists believed this greatly added to the authenticity of each film and depicted life at that time in a more realistic way. Common characteristics of neorealist films are that they are shot on location, use non-professional or relatively unknown, inexperienced actors, have plain and simple mise-en-scene, avoid complex editing, have a straight forward, feely moving documentary style of photography and have a loosely plotted narrative.

Martha Nochimson summerises this perfectly in stating that: Neorealists insisted on taking their cameras into real locations, using natural light and sound, and stripping their characters of synthetic enhancements. They frequently experimented with using non-professional and young unknown actors in order to avoid the carefully calculated mannerisms of the star.

As well as having a distinctive style, neorealist films also tended to have thematic similarities too. They generally placed emphasis on the contemporary situation, focused on the struggles of the lower class, marginalised population within society and often avoided the conventional Hollywood, ‘happy-ever-after’ endings. Rome, Open City is considered by many to be one of the most influential films ever made, and as a result it firmly put Italian neorealism on the map in world cinema. Due to the production starting virtually immediately after the occupying Germans departed, Peter Brunette described, ‘that the making of the film was carried out in the worst possible conditions’.

Because Rome was still recovering from the devastating impact the war had on the city Rossellini had no other choice but to use real locations as the film studios within the area had either been bombed, or were being used as shelter for refugees affected by the destruction of the city. Marcus Millicent points out other obstacles Rossellini faced during the production, he states, ‘the lack of studio space, the absence of sophisticated equipment, and the scarcity of film stock forced Rossellini to adopt the simplicity of means that was responsible for the authentic and uncontrived look of his finished product.’

These conditions, resulting in the need for improvisation, were also true for most films produced during the height of neorealism up until its rapid decline in the early 1950s. However some critics argue that the conditions Rossellini faced have been exaggerated, especially in regards to the poor film stock he was believed to use. Christopher Wagstaff points out, ‘The ‘look’ of Rome Open City has been attributed to poor film stock, yet the film was beautifully photographed by Ubaldo Arata on entirely appropriate film stock, one kind for interiors and another for exteriors.’ One of Rome, Open City’s main neorealist characteristics is the thematic issue’s the film covers.

Typical the neorealist films, Rome, Open City depicts the struggle of the poor, working class people within society at that time, in this case, as they try and resist the German occupation. Despite the obvious neorealist theme, critics have argued that Rossellini has deviated from neorealism within the narrative as he relies heavily on the use of melodrama within the plot and uses techniques to over dramatize the ‘epic’ moments he has created within the film, for example the use of none diagenic sound during the scene of Pina’s death is not a technique that is typically used in neorealist as it defers too much from reality itself.

Stephen Hanson even goes as far a stating, ‘its plot is highly melodramatic in the worst sense of the word.” Peter Brunette supports this view, he argues that Rossellini, “pawns off his  fictions as if they were realities in the best tradition of Hollywood. Not only do critics argue that Rossellini over dramatizes the plot, they also believe that he adopts a more linear narrative compared to the typical neorealist film. Peter Brunette argues that Rome, Open City is, ‘one of Rossellini’s most conventional films, at least in terms of its narrative and dramatic structures.’ He believes this conventional narrative style bears no benefit to the film and even goes on to state, ‘Here, unlike in his previous films, all elements of the mise-en-scene, lighting, dialogue, and everything else, however “realistic”, are rigorously enlisted in the service of a linear narrative.’

Rossellini’s use of mainly non-professional actors is a clear neorealist aesthetic within the film, however Peter Brunette argues that Rossellini did not abide by this neorealist trend entirely, as he points out, ‘(Anna) Magnani (who plays the role of Pina) was hardly a newcomer to the screen-she had already some sixteen films to her credit since her first role in 1935,’ and continues to add that she was, ‘well know to Italian audiences.’ A final neorealist stylistic quality Rossellini used in Rome, Open City, that seemingly can’t be disputed is the non-elaborative mise-en-scene. Each character’s costume was typical of what would have been wearing at the time the film was set, as we can see in ‘figure 1.’ of Pina, just before her death, with several other women.

In contrast to Rome, Open City, 8 ½ varies greatly in regards to neorealism, however, Federico Fellini had strong connections to the neorealist movement and these influences can be seen in certain aspects of 8½. One of his first roles in cinema was to work alongside Rossellini for Rome Open City and Paisa (1946) as a scriptwriter, which progressively led to him making his own films. Although Fellini’s first films were considered neorealist, (For example, ‘Variety Lights’ (1950) and The White Sheik (1952)) he soon moved away from neorealism and with 8½ he produced a film that devotes much more effort to dreams, fantasy and imagination than it does to reality. However, if you look solely at the scenes that are set in Guido’s reality you can soon identify the influence neorealism has had on Fellini’s work. The free moving camera style that gave neorealist films a ‘documentary’ feel to it is also evident in 8½. During the scene where Guido enters the hotel and is consistently bombarded and hassled by everyone, unable to get a moment’s piece is a perfect example of how Fellini adopts this style.

Throughout this scene the shots are also considerably long, (which is another stylistic quality many neorealist films possess) as the camera tracks Guido making his way through the hotel lobby. It can also be argued that 8½ has a greater neorealist quality to it than Rome, Open City in regards to the narrative and plot. Many neorealist films are not hung up on plot, and are more interested in providing a realistic ‘slice of life’ of the characters world (for example, ‘Bicycle Thieves (1948)). As well as the lack of a non-linear story, Fellini is influenced greatly by neorealist aesthetics as he uses real location throughout 8½. Although particular scenes in 8½ have aesthetic similarities and influences derived from neorealism, the film as a whole is has little relevance to neorealism in most aspects.

For example there are very little thematic similarities as a typical neorealist film concentrates in portraying the poverty, suffering and oppression of the working class, 8½ is a semi-biographical film Fellini has based on himself. Jack Hirschman describes 8½ as, “Fellini’s most directly autobiographical statement.” Another key variation from neorealist aesthetics is the fact that Fellini expresses imagination, fantasy and dreams at the expense of realism. To conclude I believe that the two films discussed in this essay are not the only respective two of their kind, in regard to neorealist films deviating from the traditional aesthetic qualities expected of it, (for example De Sica’s neorealist film, Miricale in Milan (1951) explored fantasy, at the expense of its realist qualities,) and Fellini’s 8 ½ is of course, not the only film to be influenced by neorealism.

Some critics even question neorealist aesthetic qualities further and argue because of the very nature of film production it is impossible to create an entirely realist film, Christopher Wagstaff questions a film’s realism by arguing: Within the narrative of a film, meanings can be signified indexically: if a little boy bursts into tears in a given narrative context, the meaning might be that he is frightened, disappointed or angry- the emotion caused the behaviour; but in ‘reality’ the actor (whether ‘professional’ or not) cried because the director told him to. Peter Brunette even goes as far as stating, “the only valid subject for realist cinema is the impossibility of realist cinema.” 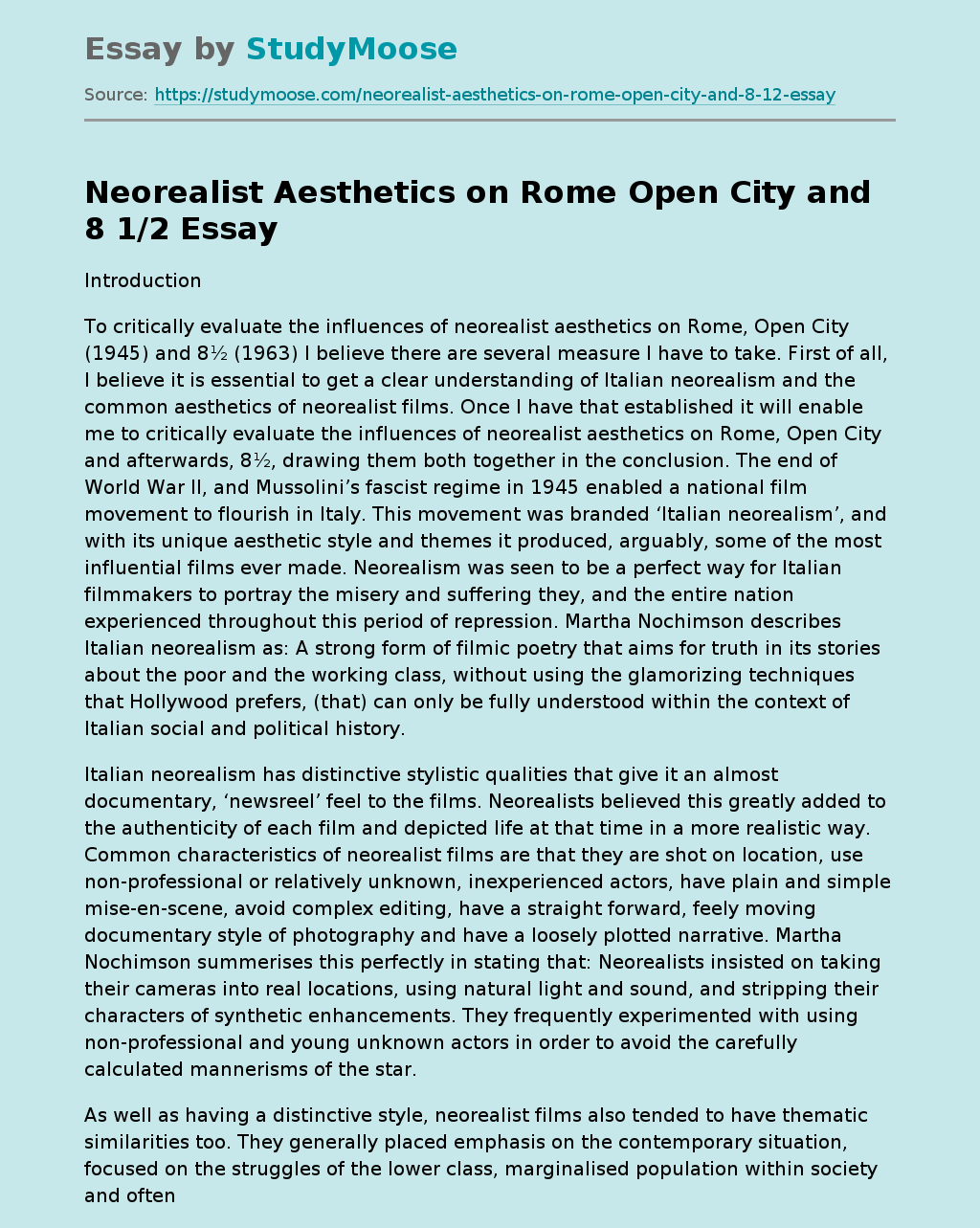