Rossellini’s Rome, Open City, De Sica’s Bicycle Thieves, and Fellini’s The Road share common ground in their makers’ country of origin and the general theme appropriated:  they are all made by Italian filmmakers to convey the reality of their country during the post-World War II era.  Above the typical collective philosophies of an wave or generation of filmmakers, the purpose of Italian Neorealism was not primarily aesthetic; much had to do with the recognition of the society’s new status, brought upon by the ills of war as it affected economy and progress.

Turn in your highest-quality paper
Get a qualified writer to help you with
“ Italian Neorealism in Rome, Open City, Bicycle Thieves, and The Road ”
Get high-quality paper
NEW! AI matching with writer

The focal point of this filmic ideology is the poor and oppressed, making the constructs of desperation and poverty the thematic directions of each identified work.

Like many social and political commentaries, the mindset of Italian neorealist filmmakers was largely on criticism and to defy establishment; the reality of Italy made it easy for them to pursue this goal, since the requirements called for more realism over the standard escapist products of cinema.

However, the results were not necessarily pegged on a particular message that would be bannered against the government—the pioneers of the neorealist movement centered on literal realism, including the use of ordinary people as actors, the presentation of Italy in its devastation, a clear emphasis on humanity and compassion, and the celebration of democracy and justice.  Stories were more akin to documentary style—using actual locations—in order to vividly show the unmasked face of Italy in the aftermath of war, rather than a presentation of scripted and measured scenes capped with metered dialogue (Advameg, 2008).

Poverty and desperation were most prevalent among Italians at the time, and the effects of this newfound condition became the essential parts of the neorealist equation.

The year 1945 in Italy was marked by the devastation resulting from the Nazi occupation of Rome that ended only a year before; this prompted filmmaker Roberto Rossellini to embark on a story that would feature the predominant elements gleaned from the war experience. Generally, the Italian religious and the Nazis are portrayed in Rome, Open City or Roma, citta aperta to take on the polar opposites of good and evil, respectively, which then provides for a clear-cut picture of reality—at least in Catholic Italy.

The use of a priest, Don Pietro, as a character, is both real and symbolic; after all, priests are as holy to Catholics as God.  He is shown to by sympathetic to those oppressed by the Germans, and strongly emphasizes the importance of helping others as a way toward God; for this, he is eventually executed.  The appropriation of the altruistic priest and his staunch Catholic values are pitted against the hard-edged countenance of the German Nazis, which expresses clearly the mindset of Italians—particularly Catholics.  Religion is a major consideration in Italy and is regarded as a way of life, and during wartime it was most likely the one area that people could rely on.

In this sense, the Italian priest, as well as the hunted Italians in the film, represents the poor and oppressed, while the Nazis hold the power.  Thus the neorealist requirement of showing reality and truth amidst the backdrop of actual history and environment is fulfilled by this film; the added element of faith conveys an even deeper philosophy unusual for this genre.

Vittorio de Sica’s Bicycle Thieves, or Ladri di biciclette, was released in 1948 and told of a man in the search for his stolen bicycle—the one thing needed for him to keep his job.  This film fulfills the most acknowledged of all requirements of the neorealist genre because of its predilection toward poverty and ill economy.  If taken literally, the narrative reveals the actual plight of Italy after the war:  the onslaught of poverty resulting from lack of jobs and other economic opportunities.

De Sica’s masterpiece has been recognized as one of the best ever made, and often represents this particular genre.  The use of non-actors and the shooting in the bleak streets of Rome comply with the classic parameters of neorealism.  In essence, the story is simple and underlined by value and character, done by proposing a situation quite real for Italians at the time.  The need for a source of income in the devastated Italian economy is common among most people, and one would be lucky to actually get a job.  In the end, the bicycle necessary for work was stolen, and the protagonist decides to steal yet another one to compensate.

While character is not at is strongest in this situation, what that film obviously wants to communicate is how the struggle to survive completely overrides inherent human values.  The poor are front and center in the story, focusing on their lack of resources; this situation not just marginalizes them in terms of opportunity but also forces them to give up their dignity.  The physical need to live will always be stronger than anything else, and this drives people to act beneath their nature.

IV. Poverty, Transaction, and Dignity in Fellini’s The Road

Released at a later date compared to the previous two neorealist films, 1954’s The Road, or La Strada by Federico Fellini is also adjudged to be one of the best of its genre and in the realm of foreign language films as awarded by the Academy Awards in the United States.  Once more a film takes ahold of the prevalent conditions in impoverished Italy, by showing how people end up sacrificing dignity for the sake of relieving themselves of their sorry state.  In the end, many of these occurrences are merely chalked up to business deals, without any remorse as to the effects on the oppressed party.

Such is the case when a mother decides to sell her own daughter to a carnival figure, who then proceeds to treat the girl as his own property or just as a way to draw in more crowds.  However, as the story reveals how the girl is disposed by her master and soon dies, the master expresses the remorse that should have been present from the beginning.  The whole story and its characters’ motivations are informed by poverty and survival; while the mother had to forgo her own and her daughter’s dignity, the carnival man negated human dignity by purchasing the girl.  On top of this argument is the business of making money in hard times, which is the primary reason for people to commit such acts.  The revelation in the end shows the repressed feelings of one who has completely removed himself from all personal affection and emotion, yet the humanity in him could not sustain the permanency of this condition.  Poverty is again the cause of this circumstance—a common issue in Italy and the neorealist genre.

The post-war era of Italy was of significance to the country and its residents, considering their experience under fascist rule.  The gloss and pomp of mainstream cinema, which represents Italy in an opulent and antiseptic manner, was deemed inappropriate by new filmmakers in the depiction of relevance and reality; the new style was to be realism—the communication of the social situation as it was.  Black and white presentation and the acting of regular people matched this quest for truth and honesty, and the impoverished state of Italy needed to be revealed as part of the picture.

While Italy has long been known to be the bastion of religious and artistic culture—including the rich and colorful past of the country itself—it was but apt to reveal the hardships of its people as an effect of the war, to show the humanity and reality that are needed in depicting generations through cinema. 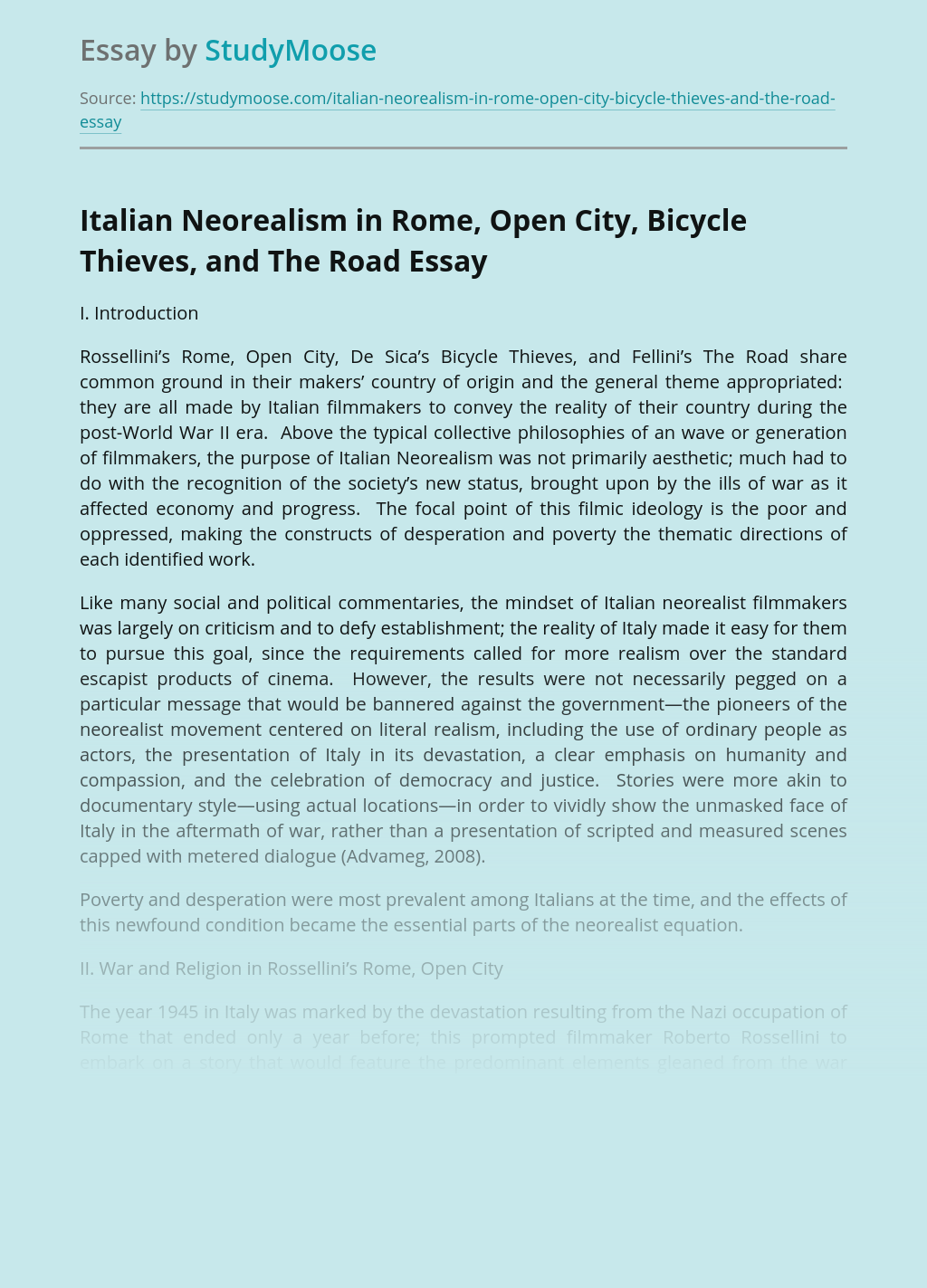 Turn in your highest-quality paper
Get a qualified writer to help you with
“ Italian Neorealism in Rome, Open City, Bicycle Thieves, and The Road ”
Get high-quality paper
Helping students since 2015
Stay Safe, Stay Original