Throughout history, art and music have developed in parallel with each other. The impressionist movement is no exception. Impressionism in art began in France near the end of the 19th century. Impressionist painters did not seek to show reality in the classical sense of a picture-perfect image; instead, they emphasized light and color to give an overall “impression” of their subjects. Much in the same way, impressionism in music aims to create descriptive impressions, not necessarily to draw clear pictures.

The music is not designed to explicitly describe anything, but rather to create a mood or atmosphere.

This is done through almost every aspect of music: melody, harmony, color, rhythm, and form. Melodies tend to be short in nature, often repeated in different contexts to give different moods. In terms of color, notes are often drawn from scale systems other than the traditional major and minor. These include pentatonic, whole-tone, or other exotic scales (for example, Debussy, a major figure of impressionism, was influenced by Asian music).

The use (or misuse, as some critics might say) of harmony was a major part of impressionism. Impressionists did not use chords in the traditional way. For nearly the entire history of Western music, chords had been used to build and relieve tension, thus giving the music a sense of direction. Now to provide an example of impressionism, we have “L’îsle Joyeuse” (“The Island of Joy”) by Claude Debussy. This is actually a musical interpretation of the painting “The Embarkation for Cythera” by Jean-Antoine Watteau. Both the painting and the piece tell the story of a journey to the mythical island of Cythera, an ideal place of love and beauty.

The opening trills suggest the excited anticipation of the travelers; a middle section depicts them floating over the water; their arrival is heralded by jubilant trumpeting; and their ecstatic joy in realizing their destination provides a climactic finish. The chords in this piece sometimes serve no harmonic purpose in the traditional sense; these chords set the joyful “color” and mood of the piece, and are no longer exclusively used to build and release tension. Sometimes the melody isn’t very clear, but rather implied… we only get an impression of it.

Impressionism marked the first major steps into the Debussy and Maurice Ravel. An especially noteworthy aspect of impressionism was the weakening of the concept of tonality. Even though impressionist music was still tonal in nature, the “non-functional” chords paved the way for the later likes of Schoenberg, and others to do away with tonality altogether. 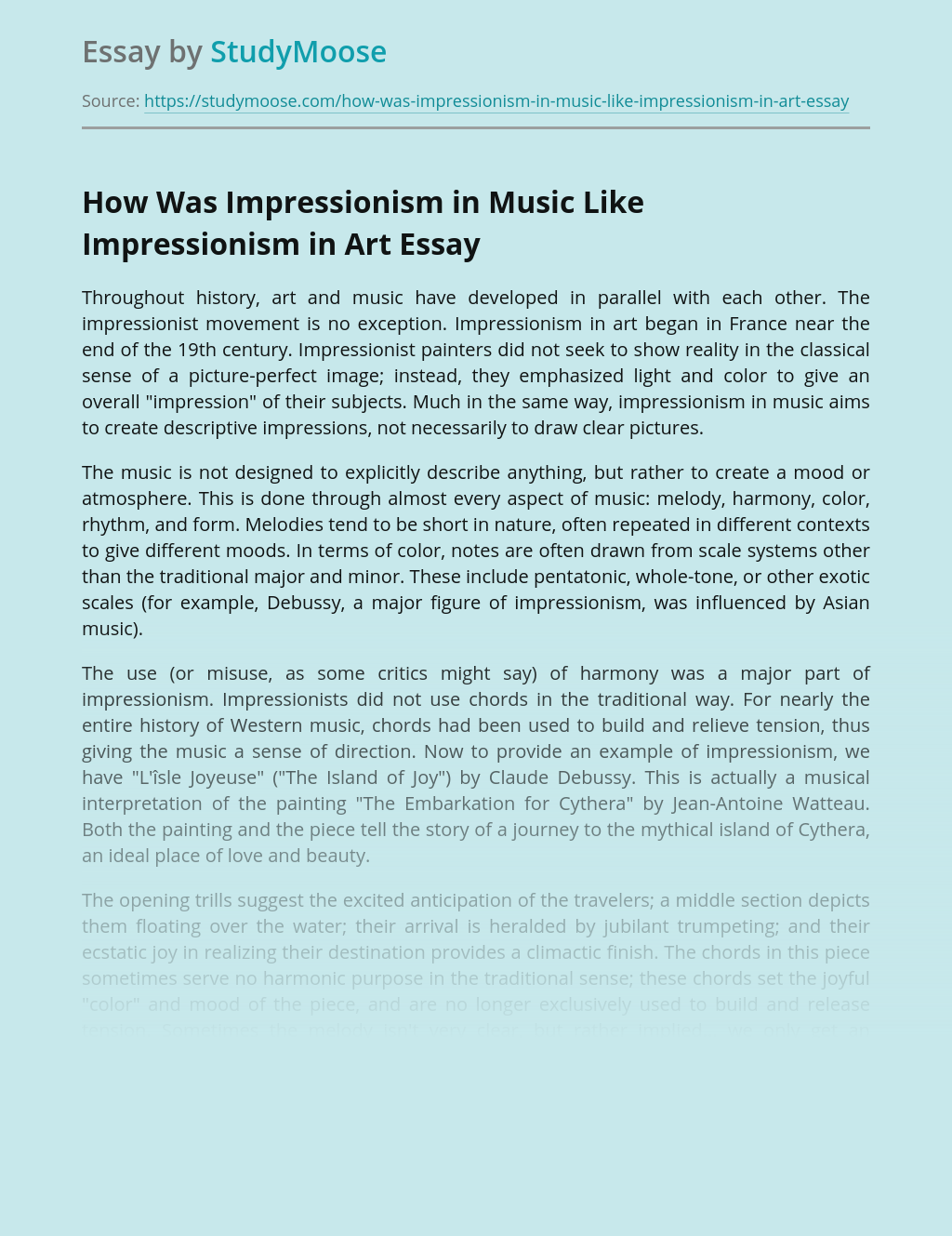 The Republic of Maldives consists of 1,190 islands (fewer than 200 are inhabited) in the Indian Ocean, southwest of Sri Lanka. The Maldives has a population of 270,000, of which about 70,000 reside in Male, the capital city. Beautiful atolls, inhabited by over 1,100 species of fish and other sea life, attract thousands of visitors...

Layers of the Earth

Get Essay
"Dialogue with Trypho" by Justin Martyr

In his work “Dialogue with Trypho” Justin Martyr in a form of a dialogue presents the views quite contrary to what it is usually taught. A well-known idea of Jews being the chosen nation favored by God is rejected. Justin Martyr is trying to find logic underneath God’s wrath, and his line of argumentation, based...