Impressionism or the Impressionist school of painting was one of the most popular genres of art practiced in the late 19th and early 20th centuries. The name derives from the unfinished look, which these paintings seem to project, are rather the creation of the impression, which they leave on the mind of the viewer. The Impressionist form of painting worked to capture the immediate moment, brimming with the vitality of the day and the ordinary everyday pursuits of the common people who were its subject.

Don't use plagiarized sources.
Get Your Custom Essay on Short Essay: Impressionism Just from $13,9/Page

It was a break from the rigidity of the neo classical tradition that was typical of early 19th century art.

According to Kleiner, (2009) Impressionism can be seen as the reaction to the “Sometimes brutal and chaotic transformation off French life that occurred during the latter half of the 19th-century.”(p. 654) The paintings of this genre show a tendency towards incorporating subjects from real life and real events compared to the earlier period when themes were chosen from history and religion.

Some of the most famous artists of the period lived in Paris and as such, some of the most well known works of the period depict the good Parisian life. Impressionism was also influenced by the art of Japan and artists incorporated Japonisme, the aesthetic of Japanese beauty and exoticism in their works.

According to Gunderson, (2008) Impressionism “ was centered in Paris, sprang from Realism, in large part due to a prominent painter of the time, Edouard Manet” (p. 11) one of the foremost artists of the style. Impressionism, in this sense can be seen as a reaction against “the flamboyant opulence and ostentation, the meaningless eclecticism of the Neo – Renaissance Neo – baroque extravaganza, with its lavish sculptural decorations…” (Honour, Fleming 2005, p. 712) that was part of the Third Republic. While Manet may be one of the important artists of the period, some of the other important artists associated with this genre are Paul Cezzane, Edgar Dégas, Claude Monet, Pierre Auguste Renoir, and Camille Pissaro. In the works of these artists one can see some of the defining elements of Impressionism. Their paintings are marked by strong and noticeable brush strokes and the paint is also applied thickly.

The technique of Impressionist painting is such that the brush strokes are not blended together. This is seen in Manet’s Luncheon on the Grass, where he used “broad brush strokes that relied on the juxtaposition of different colors to create depth” (Gunderson 2008, p. 12) rather than perspective, which was the earlier style. Manet’s name is associated with the Impressionists although he never exhibited his works with any other painter of the genre. His influence can be seen in the works of Monet and Renoir, who used short brush strokes and placed stress on the play of light on water and other objects. The birth of the Impressionist movement can be formally traced to 1874 when a group of painters, which included Monet, Renoir Pissarro, Sisley, Degas, Cezzane and BertheMorisot, exhibited at the Salon in Paris. (Rewald 1961, p. 7) Manet though, is considered the father of Impressionism because of the revolutionary techniques incorporated by him in the creation of his works. One of the identifying features of Impressionist painting was the stress upon the outdoors.

These artists took the subject of painting away from the confines of the studio and the indoor to the outside. This style, also called plein air painting depicted scenes of outdoor life, but while earlier plein air confined itself to landscapes, in keeping with the themes of Impressionist art, this plein air depicted scenes from Parisian cafes and night life, and other such public arenas (Evans, 2012). The artists of the Impressionist style followed broadly the same techniques and choice of subject matter in their paintings, but each one had an individuality that shone through. In the works of Manet, there is sureness to the broad-brush strokes and there are “strong contrasts of light and dark…” (Salinger 1968) His pictures are marked by a lumosity that attracts viewers apart from the felicity of his brush technique. In “The Dead Christ and the Angels” one of his few works with a religious theme, the figure of Christ is highlighted with a strong light that leads the eye to the main figure. Monet’s work is marked the prevalence of sunlight that illuminates his landscapes as well as his scenes from daily life.

Sisley’s works are marked by “broken tones and…oil paint to obtain the effect of clarity and transparency usually associated with watercolor.” (Salinger 1968) Renoir’s work is marked by “typical loose brushwork” (Salinger 1968) and at the same time he pays attention to details, which enhance the overall quality of the picture. In “The Luncheon of the Boating Party,” the scene brims with gaiety and warmth and there is a sense of idyllic pleasure in the work. The subject of this famous painting also typifies the themes expressed by Impressionist painters. The clients and the owner of a restaurant are shown rejoicing in an afternoon of good food and the company of friends. The use of light in the painting is especially remarkable with the entire painting being bathed by a “light… coming from the large opening in the balcony.” (New World Encyclopedia, n.d.)

The work of the Impressionists was a marked departure from the stringent rules of theme and technique followed by the Paris Salon. While the Salon, as run by the Academy stressed upon historical, religious themes and portraits, the Impressionists took the subject of their painting to more contemporary themes. Impressionist art was marked by a celebration of the present time, where the ordinary people and the environment in which they were placed became the focus of artistic activities.

Also, while the Academy allowed the production of landscapes, it was done in the studio, but the Impressionists took their canvas into the fields and beaches and sketched nature as it appeared, at various times of the day and seasons of the year. The style of Impressionist art is marked by the creation of a congenial atmosphere where the daily activities of the common man are celebrated. It is an art form, which worked to take both the theme and execution of painting from the confines of the studio, and ages past into the present moment and depicts people who were still alive. It became the celebration of the ordinary happy bourgeoisie life and rescued art from the confines of the elitist society which had until now sponsored it and therefore had become its primary subject. 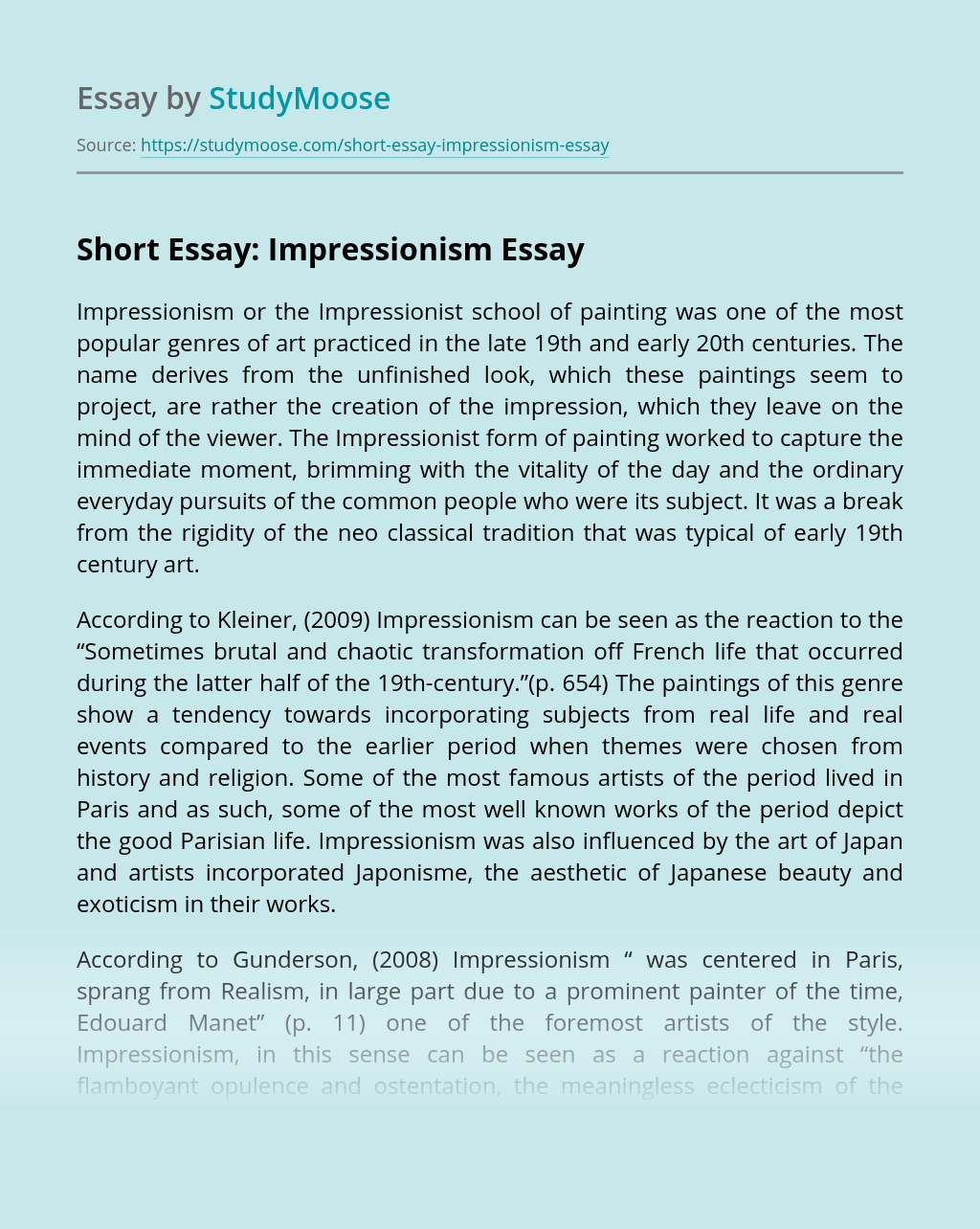 Vangelisti, Young, and Katy (2005) study suggests that people’s explanations for their hurt feelings can influence how they feel and how they respond to others. Although the events and behaviors that elicit hurt have been examined, individuals’ beliefs about what made them feel hurt have not been explored. The current study extends existing research by...

Wie Company has been operating for just 2 years, producing specialty golf equipment for women golfers. To date, the company has been able to finance its successful operations with investments from its principal owner, Michelle Wie, and cash flows from operations. However, current expansion plans will require some borrowing to expand the company’s production line....

Get Essay
Addiction to Junk Food

Everyday, millions of people consume the so-called addictive “junk food. ” Most of the people who do not have time, or find it affortable eat in fast food restourants such as McDonalds, Burger King, and many others. Junk food is addictive because of many reasons such as saving time. The junk food can be clasified...

Q1. We learn about the type of people who live in the neighborhood. It sets up the stereotype of young black youth living in the Bronx, New York. It shows the setting as a city with high-rise buildings and people who are not in wealth. It shows the struggles they have to go thorough. Q2....

WEEK 1 ECO 204 NEW Week 1 Quiz 1.Question :In economics, scarcity means that Student Answer: there are not sufficient resources to produce everything that people want. poverty will always exist. a country can never feed all of its citizens. the price of a good may increase more rapidly than the general price level. there...