“To Paint a Water Lily” by Ted Hughes

In “To Paint a Water Lily,” by Ted Hughes, the speaker examines the complex aspects of nature by revealing the challenges he faces as an artist in capturing its real meaning. When he looks at the scene, he sees an exciting little world of constant movement and activity, hidden by the peaceful stillness of the water lilies that float at the surface of the pond. Ted knows that to paint the water lily and do it righteousness requires more than a simple description of the plant itself—he must also somehow capture its environment; the busy life that surrounds it.

Don't use plagiarized sources. Get your custom essay on
“ “To Paint a Water Lily” by Ted Hughes ”
Get custom paper
NEW! smart matching with writer

The power with which the speaker describes this incredible task and the appreciation he feels for the outstanding convolution of nature is expressed through the use of tone, language, imagery, diction and figurative language.

The speaker begins by introducing the water lily as a stage for the activity that goes on around it. He describes “a green level of lily leaves” that “reefs the petal’s chamber and paves the flies’ furious arena,”–a cover for the activity below and the ground for the action above.

The picture establishes the speaker’s view of nature as a complex body with layers that reach beyond its seemingly inactive surface. The language used by the speaker to describe the lily leaves, marked by alliteration and subtle imagery, also demonstrates the speaker’s appreciation of the beauty of nature’s “outer surface,” the face it shows most plainly to the casual observer. The speaker also personifies nature by describing it as a “lady” with “two minds,” clearly those that exist above and below its surface.

Study these, the speaker notes to himself, and only then can one develop an accurate understanding of the heart of nature.

Despite the fact that the speaker’s plan is to reveal a water lily in a painting, he cannot help but recognize the sights and sounds that also help create the image of nature. When he “observe[s] the air’s dragonfly,” he does not simply see an insect that “bullets by.” He hears the “hum under the trees” and the “battle-shouts and death cries” that fill the atmosphere. The intense use of auditory imagery in this scene reflects the speaker’s view of his surroundings not only as a visual, but total sensory experience.

He senses the aggressive, active, almost chaotic environment in the air, though “inaudible,” with meaningful pleasure. The striking scene he almost hears is also complemented by what he sees before him, as flies “rainbow their arcs, spark, or settle.” The line which immediately follows, in which the speaker uses simile to describe inactive flies as “ cooling like beads of molten metal through the spectrum,” enhances the liveliness of the scene and emphasizes analysis, rather than plain observation of nature.

The speaker’s shift in attention to the pond below the water lilies is just as suggestive, but takes on a slightly darker tone to balance the blackness and unknown of the water below. There, creatures from “prehistoric bedragonned times” creep around, unaware to both “age” and “hour,” as if frozen in an unchanging, liquid atmosphere of doubt.

The speaker is fascinated at what he sees as he sits down to paint a water lily. Such difficulty surrounds him, covered by the plainness of the water lily that floats at the surface of the pond. In painting the water lily, the artist must plunge himself “deep in both worlds,” and keep in mind that, while nature can appear to be “still as a painting,” a liberal world of unbelievable depth and energy lives past the surface.

“To Paint a Water Lily” by Ted Hughes. (2016, Oct 04). Retrieved from https://studymoose.com/to-paint-a-water-lily-by-ted-hughes-essay 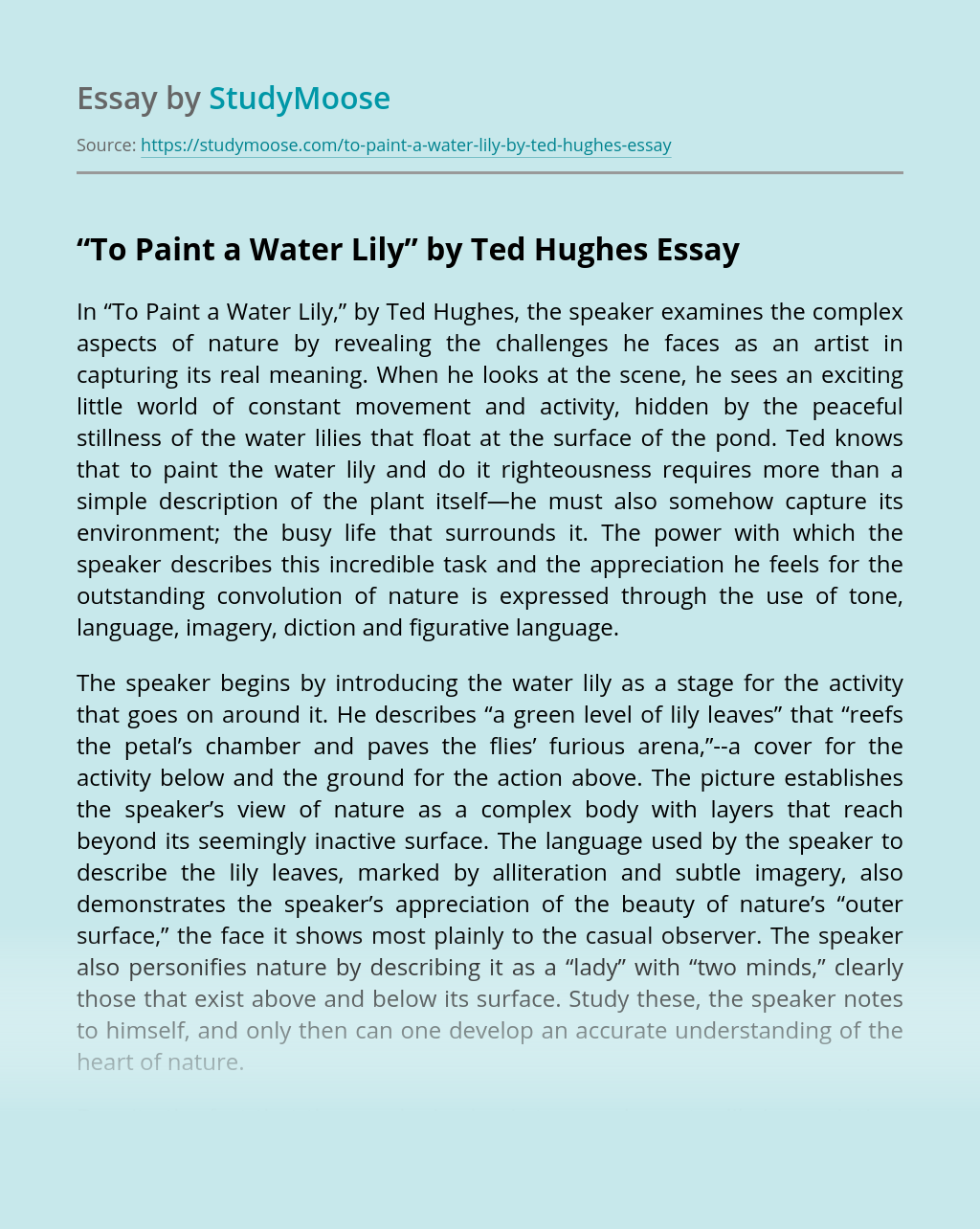