The practice of hawking is to take a trained hawk to catch a prey. In this poem the hawk is the hunter, and the hunter after him, witnesses a cruel act of nature: the wind makes the noble hawk come down to the ground, where it collides with the earth and dies.

One of Ted Hughes’ primary ideals was the superiority of animals to man because of their inability to comprehend death and therefore not being afraid to die. They are free from inhibitions, and are focused on life and incorruptible, thus acting as agents for the immoralities and impurities of mankind.

Don't use plagiarized sources. Get your custom essay on
“ Analysis of Ted Hughes’ Poem ”
Get custom paper
NEW! smart matching with writer

In Hawk in the rain, the graceful hawk is contrasted with the hunter’s heavy weight.

Given the state of England at the time of writing the poem, one can attribute a wider symbolism to the hawk: the noble animal, struggling in a mad world, can be taken in the patriotic worldview of England suffering by the insanities of the surrounding world , coming out of the storm of World War II and the trauma of the Cold War.

Here the hawk can symbolize Great Britain; the hunter is the nameless spirit of the world, watching from afar.

Ben Howard accused him of writing predominantly violent poetry “often resembles the celebrant, if not the proponent, of violence and destruction.” It was he who gave Hughes the nickname ‘ambassador of terror’, and he was disgusted with the violent images of Hughes, of which there was much in his poetry.

Hughes himself claimed that he embellished his verses in order to deepen his imagination and thus find the “genuine self.

” The function of poetry is to express something of the “profound complexity that makes us exactly as we are,” and thus his return to the inner self was “a return to the forest,” which became the central theme of his poetry. Violence, therefore, was a form of purification ritual, a way back to the innocence.

In these two stanzas, the violence of words stands out. Even a simple phrase like “thumbs my eyes” shows the violence of nature, which has often been shown in poetry as innocent and unworthy of violence;

Hughes’s nature, on the other hand, is a primordial force, something that existed before man and will survive man, and every inch of his power appears in these stanzas. Nature, too, is not about destroying your own creations – thus the death of the hawk that is about to occur – which is another quality that lends this poem a chaotic, almost cruel tone.

This idea of nature, however, is not natural; is nature twisted by humans, nature tortured by humans. Nature is not simpler; has the evil of humans and “nature becomes the devil. He does not look like Isis, mother of the gods, what he is. He looks like Hitler’s familiar spirit.

The balance in nature in postwar Britain for Hughes only existed in nature – “poetry is … the record of how the forces of the Universe try to correct some balance disturbed by human error.”

Nature provided peace and shelter, but they moved on ; now, nature is revolting against humans, and nothing can stop it because nature will always be stronger.

With animals, Hughes tried to show the primitiveness of humanity and let them vent their violent nature – in fact, most of the animals he chose are predators, hunting for animals that can be allegorized to humans. Hughes fought in World War II, witnessed precisely what Britain was going through, and comparing humans to hawks made more sense than comparing them to swans; this also helped to show the destruction that occurred during World War II.

The outcome of the poem is the death of the hawk: once noble, it is crushed to the ground like a child doing tantrum – again, humanizing nature, allows the reader to come to terms with the idea of a nature that has been distorted by the presence of humanity. The divine exists in the description of the hawk (“round angelic eye”), even broken as it is. 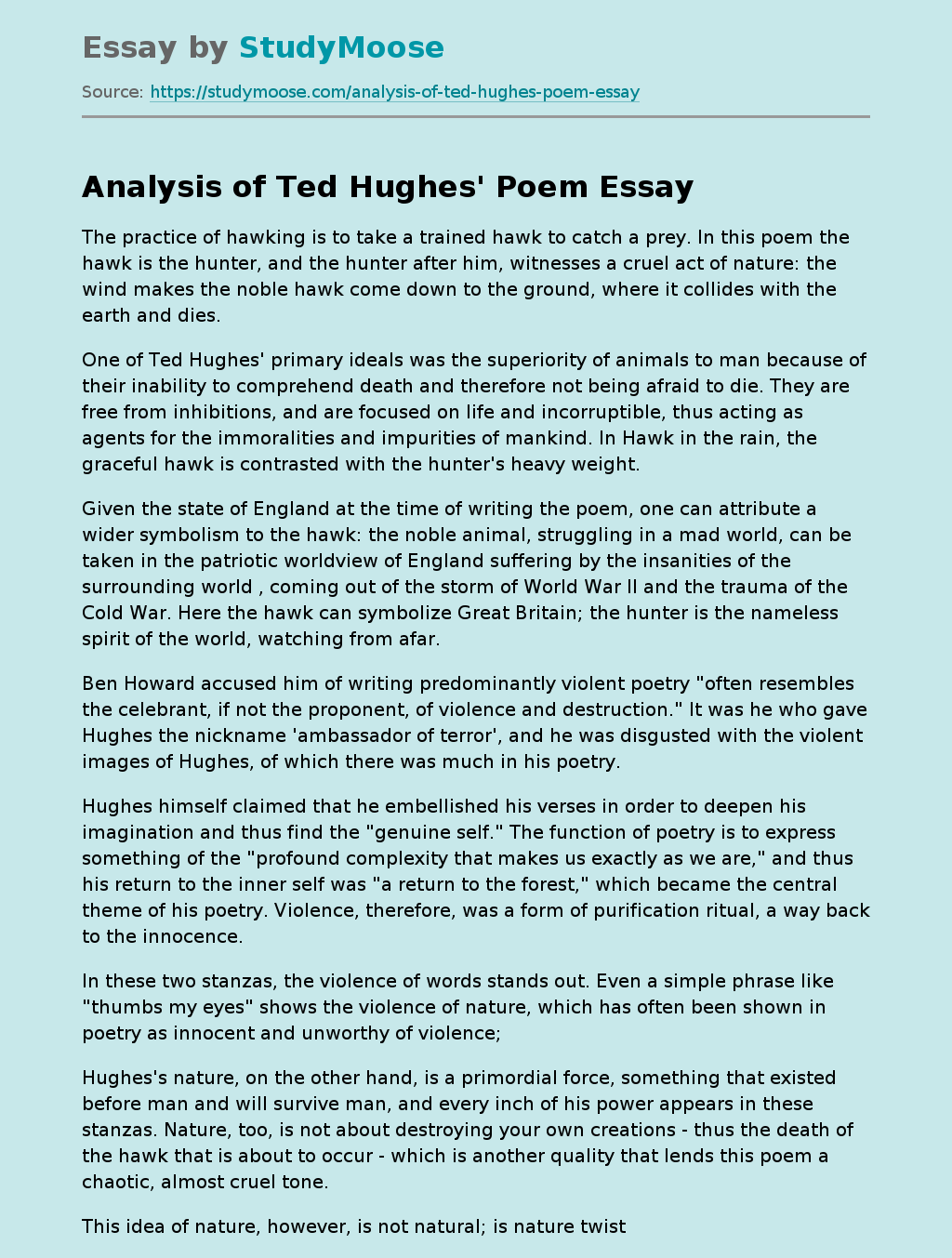