‘Red’ is a final collection by Ted Hughes in 1998 before he died. It has also engages the final death of Slyvia Plath in this piece of poetry. Ted Hughes has used ‘Red’ and ‘blue’ to describe Plath’s view of life and character from the day they got married and lived in their house.

In the beginning of Red, it has defines Plath’s favourite colour that seems to wrap her entire life and movement. In line 4, ‘blood-red’ may have constitute a certain image caused in life that can be related to violence or conflict inferred to Plath.

Don't use plagiarized sources. Get your custom essay on
“ “Red” by Ted Hughes ”
Get custom paper
NEW! smart matching with writer

Life and death signifies nothing important for her to continue life and seems to live in remembrance in her deceased family members in line 7.

In the second part of the poem, Ted and Slyvia had married and she had stepped into the life of her husband. In line 2, ‘Our room was red. A judgement chamber’ refers to how deeply in love Slyvia was to the colour that mades Ted shivers upon thinking of jurys.

Everything was red from the ceiling to floor, the settings of their room was like a throbbing cell in line 9 which set his heart pounding. The only colour that can escaped from Slyvia were the bookshelves which can represent a glimpse of hope and meaning to the both of them.

In line 1 to 3 of ‘Red’ third portion, it tells us how Ted tried to runaway from the blood chamber by looking out to the windows but to no avail.

He could not help himself from not thinking of his wife’s saddening and crimson red image. He describes his feeling like blood tossing from a wound in line 5 that eventually will lead to a sense of impending doom (line 7).

In the fourth paragraph, it tells readers how Ted finds his wife’s clothing and sensual lips which spells blood and rawness. ‘A swathe of blood’ that envelopes or enfolds a hidden blood (line 1). In line 2 to 4, the way Slyvia revelled the lavish, generous red burgundy gives an imaginary picture of she was painting the town in red too. Once again, he feels the blood shimmer from the gash (line 7).

From the fifth part of the poem, it depicts the gleam of hope has been splashed with blood too. In this part, those roses refer to the colour ‘red’. Slyvia began to lose herself deeper into the helpless world of her own with occasion of optimism.

Lastly, ‘Blue was better for you. Blue has wings’ express the kind of life Ted prefers his wife to be. The only times where she liked ‘blue’ was when she was pregnant. He really liked her to be like an angel or guardian in the sky as the colour of blue sky. But Slyvia Plath chose to lose herself, lost her soul in the pit of red.

Ted Hughes feels guilty and remorseful of her death although he may not be the entire cause of her suicide. He uses poem to convey his feelings to the readers and to Slyvia Plath. 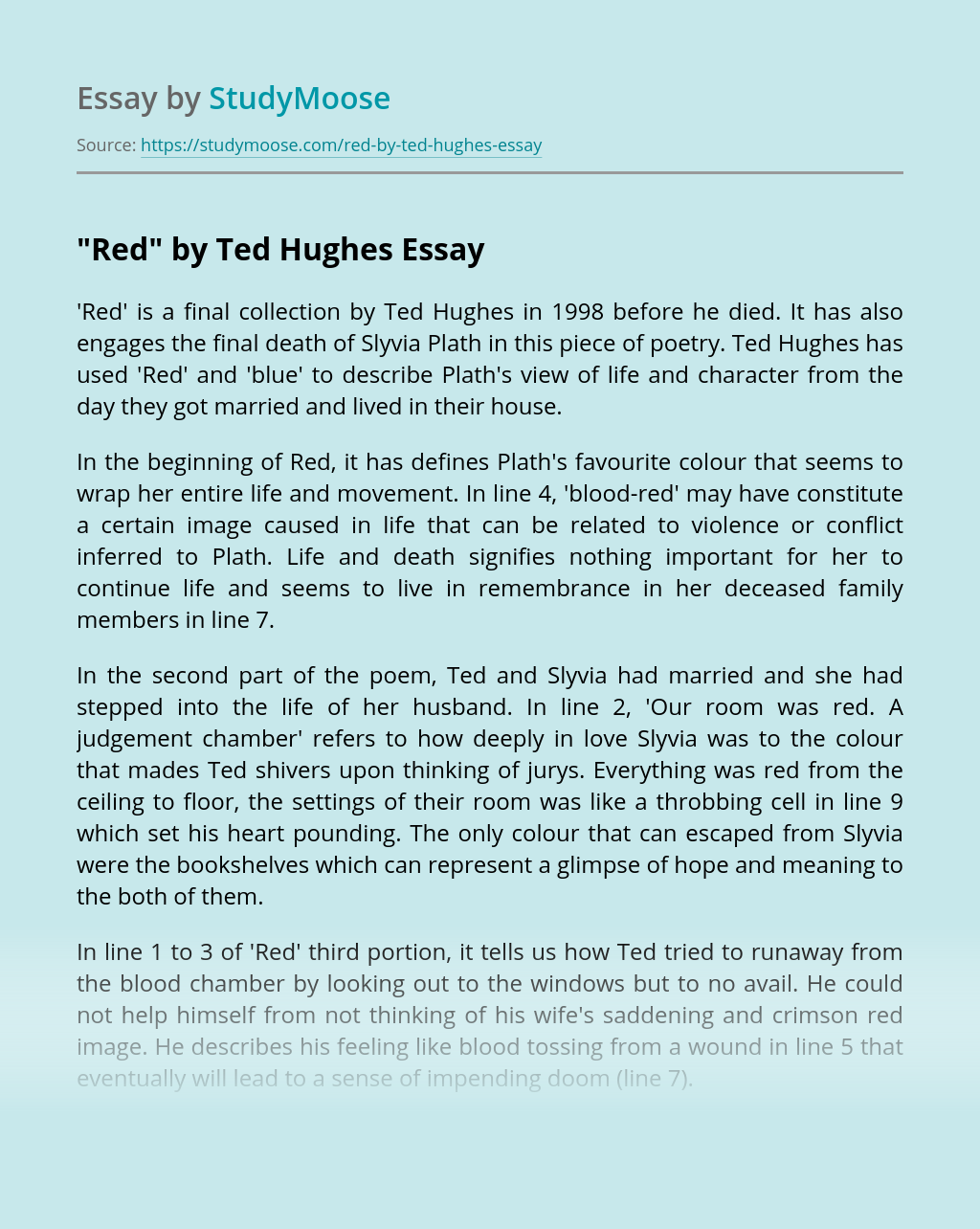