The final stanza has a tone of sorrow. Larkin knows the men will all die but the men and women themselves at that time were not aware of what was about to happen to them. Larkin uses the word ‘never’ three times, “never such innocence”, “never before or since” and “never such innocence again”. He repeats this word to show what has been lost, a world that can never be recaptured. This repetition underlines to the reader that lives, values, and standards were destroyed by the war.

Don't use plagiarized sources. Get your custom essay on
“ “Six Young Men” by Ted Hughes ”
Get custom paper
NEW! smart matching with writer

The innocence is betrayed (“changed itself to past”). Larkin reinforces that life would never be the same after 1914 and how it had a massive impact on lives. It’s only in the last stanza that the reader can see that Larkin is telling us about a wartime photo and how no-one then knew just how much life would change, that the men who thought it was an adventure would never return and that the marriages would only last “a little while longer”.

Hughes’s poem is four stanzas long, each made up of nine lines. This is an unconventional structure for poetry, and at first it appears as if it is even more relaxed in structure than Larkin’s poem. However, when we look more closely we can see that it is actually more controlled than Larkin’s poem, because every line ends in a “half-rhyme” (where the consonant matches but the vowel doesn’t). For example, in the first stanza there are the endings “well”, “smile”, “fashionable” and “bashful”, then “friends” and “hands”, then “tinged”, “pride” and “dead”.

This means that the poem seems free when it is actually very closely controlled.

In the first stanza, Hughes states that he is about to tell us about a photo, unlike Larkin who does not tell us at all, and that he is going to relate the story of the six young men in it. He tells us how the fashions were different then (“though their cocked hats are not now fashionable”). He also gives us details of these young lads’ appearances (“one chews a grass, one lower his eyes, bashful/ One ridiculous with cocky pride”). This gives us an idea of their personalities and helps us to imagine what they were like in life. Because Hughes has given us an idea of how they were, the stanza ends with a very a hard-hitting line for the reader (“Six months after this picture they were all dead”).

In the second stanza, Hughes firstly tells us how these young men “all are trimmed for a Sunday jaunt”, which is a slightly archaic word meaning a day out, a good time. Then the stanza goes on to describe a place that has not changed since the photo was taken. Like Larkin’s poem, Hughes’s poem compares fragile human existence with the endlessness of Nature and puts us in the glade with an image that the reader can almost hear and see (“you hear the water of seven streams fall”). Hughes ends this stanza with another hard-hitting line, “though their faces are four decades under the ground” which contrasts with the peaceful scene he has just described.

Unlike Larkin’s poem, Hughes’s third stanza has some very graphic violence as he moves away from the peaceful English countryside and goes directly into the war zone. He gives us personal details of each of the young men in the photograph, and it looks that he wants to shock us with the details of each man’s horrific death (“this one was shot in an attack”, “his best friend/Went out to bring him in and was shot too”, “this one… fell back dead with his rifle-sights shot away”). It is short and brutal and succeeds in making us realize how horrific the combat was. Hughes’ last line once again goes straight to the point about what happened, “all were killed”.

In the fourth stanza, Hughes shows us the way in which war can change someone by taking a single soldier, describing him as an individual human being and then describing his agonies, as he lies dying in hospital. Hughes describes a smile with the metaphor of a “locket”, meaning a valuable treasure and also meaning something private and locked away. He does this so that he can contrast this with the wounded soldier who has no privacy in the hospital and is turned into “mangled” “bulk” and “weight”. We are also given the image of “war’s worst thinkable flash and rending”, a missile or grenade exploding. Hughes’s tone is angry, and he doesn’t try to hide the reality of the war’s gruesome pointless deaths (“rotting into soil”).

In the final stanza, Hughes shows us more of his anger at the pointless waste of life in the First World War. He returns to the photograph, which started the poem but carries on using the contrast from the last stanza, the peaceful image of the six young men against the violent gruesome deaths they had. Hughes continues with his use of brutal and horrific words, giving the reader some unpleasant images (“no thought so vivid as their smoking blood” and “such contradictory permanent horrors”) in order to give his poem more impact. Almost every line contains a contrast from alive to dead, from calmness to violence, and the poem’s message is that the change is so puzzling to us that it takes us out of our own modern age and makes us try to put ourselves in their place (“shoulder one’s own body from its instant and heat”).

In conclusion, I would say that I prefer Philip Larkin’s poem “MCMXIV” to Ted Hughes’s “Six Young Men”. Ted Hughes’ poem felt very repetitive sometimes. I thought he was saying the same thing over and over again at the end of every stanza without making his message deeper or more interesting. The violence is also too graphic and doesn’t really move me. Larkin’s view of the war is more subtle but he still gives us an insight to the war and his version of life is more realistic. “Leaving the gardens tidy” is a very sad little personal detail because it seems so pointless and innocent and I think it rings more true than Hughes’s general descriptions of corpses and grenades. 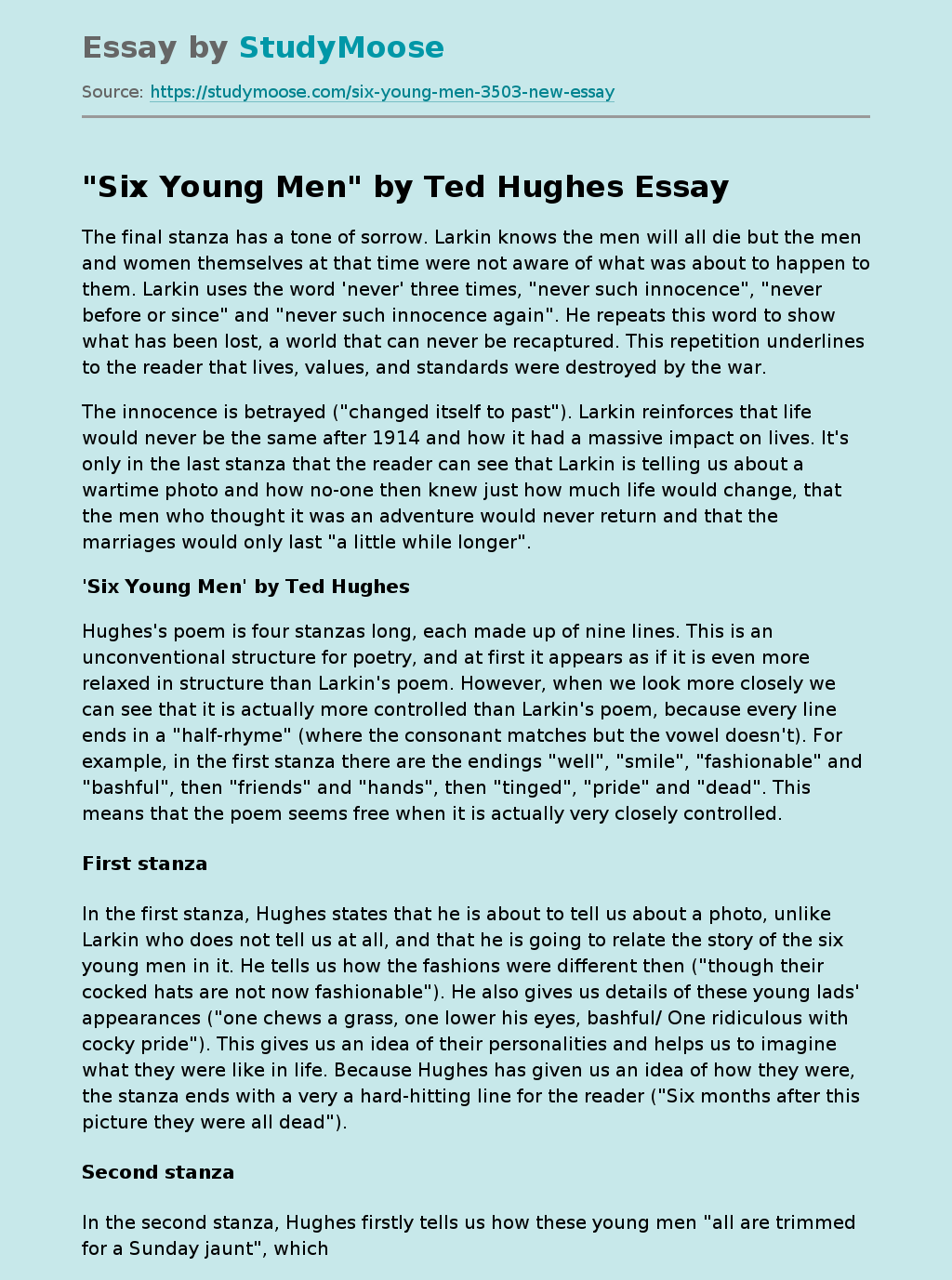