A Poem Thistles by Ted Hughes

Like tall nettles, thistles, takes ideas about life from nature.

The defiant character of the plant is emphasized in the very first word (“Against”) of this poem. They not only resist all animal (“rubber tongues of cows”) and human (“hoeing hands of men”) attempts to destroy them but even attack the natural world, indicated by the words “spike the summer air”. Further, they make it difficult for themselves to reproduce because their seed-pods open only under ‘pressure’.

Every plant, without exception, is similarly defiant, according to the second stanza.

Don't use plagiarized sources. Get your custom essay on
“ A Poem Thistles by Ted Hughes ”
Get custom paper
NEW! smart matching with writer

Moreover, it is determined to revenge itself upon whatever destroyed the parent plant. The violence of its determination is expressed in the term “resurrection”. This paradox, that it brings forth life in death, gives it a mythic quality and makes it seem an otherworld species. Its unremitting and unfeeling hostility is conveyed by the words “grasped fistful of splintered weapons”, that refer to its many sharp thorns, which can inflict painful wounds.

The poet further emphasizes the fierceness of the thistle by linking it to those legendary warriors, the Vikings, who came from the cold Scandinavian countries and raided the coasts of northern and western Europe from the eighth to the tenth centuries. He does this explicitly in the words “Icelandic” and “Vikings” but also indirectly through reference to the origins of the word “thistle” (which, with the word “Viking”, derives from Old Norse or Icelandic, the language of Norway and its colonies down to the 14th century). He even suggests thistles are a means of revenge used by the Vikings against those who took their lives so many centuries ago.

The long-dead bodies of Vikings have resisted assimilation and complete disintegration in foreign soul and they still exist as a “stain”, or have merely “decayed”. The thistles “thrust up” from their remains. They are also linked to the pale-skinned Vikings by their ghostly paleness and their ugly appearance is like the ugly speech sounds (made in the throat or by the back of the tongue and the palate) used by the Vikings. Their murderous character is conveyed in a metaphor which again links them to battle, as “plume of blood” suggests the red flower which grows on the seed-pod looks like the feathers on a medieval soldier’s helmet.

The final stanza explains how, when the thistles grow old and are cut down, they fight back even more strongly because their seed-pods burst and spread new plants (their “sons”) over the territory which had been cleared of the parent plants.

The poem hints at the existence of an inescapable force behind nature, which cannot be defeated by man. It manifests itself in cycles of death and birth and unifies nature because it us also within man. This last point is indicated by figures (metaphor, simile and personification) which link thistles and men by descent (thistles come from Vikings). They have children, like humans (they are “revengeful”), tools of war, like humans (“weapons”), and they have other human qualities and attributes (grasped, stiff, blood, feud, fighting, and gutturals of dialect). Despite this, their oppositional character also had a quality of myth because they reappear and multiply like the legions of invincible warriors in Greek legends or Icelandic sagas.

The poet emphasizes this quality in the first line of the poem by inverting the usual word order and using parallel structure (rubber tongues of cows/hoeing hands of men). He does it again in the last three lines by using anthropomorphic terms and personification (feud, sons, stiff with weapons, fighting back).

The frequent use of emphatic, and sometimes onomatopoeic, verbs such as “spike”, “crackle”, “thrust” and “mown”, gives a muscular vitality to the action of the thistles, while the use of pre- and post-nominal modification (rubber tongues of cows, hoeing hands of men, revengeful burst of resurrection, grasped fistful of splintered weapons, underground stain of a decayed Viking, gutturals of dialects, plume of blood) lends density and richness to the descriptions. This richness is heightened by the occasional use of metaphor, simile and personification (rubber tongues, plume of blood, sons, etc.).

The poem consists of four triplets of free verse. Assonance is used extensively to link elements and unify the poem (e.g. rubber/summer/under, in the first stanza, or stain/decayed, in the third). Alliteration and consonance are occasionally used to echo the sense of the words (hoeing hands – the repetition of the -h- sound suggests effort, while “gutturals of dialect” creates an ugly cluttered effect).

Some variation in line lengths, such as in the short second line of the first stanza and the first like of the second, is effective in suggesting the abrupt and violent nature of thistles. The poem slows and becomes jerky, and simpler, in the last stanza, as if with exhaustion, and so conveys a sense that the thistles are dying. Half of the last stanza refers to the “sons” and gives a clear sense if the cycle having begun again, and will continue endlessly.

A Poem Thistles by Ted Hughes. (2016, Jul 23). Retrieved from https://studymoose.com/thistles-by-ted-hughes-essay 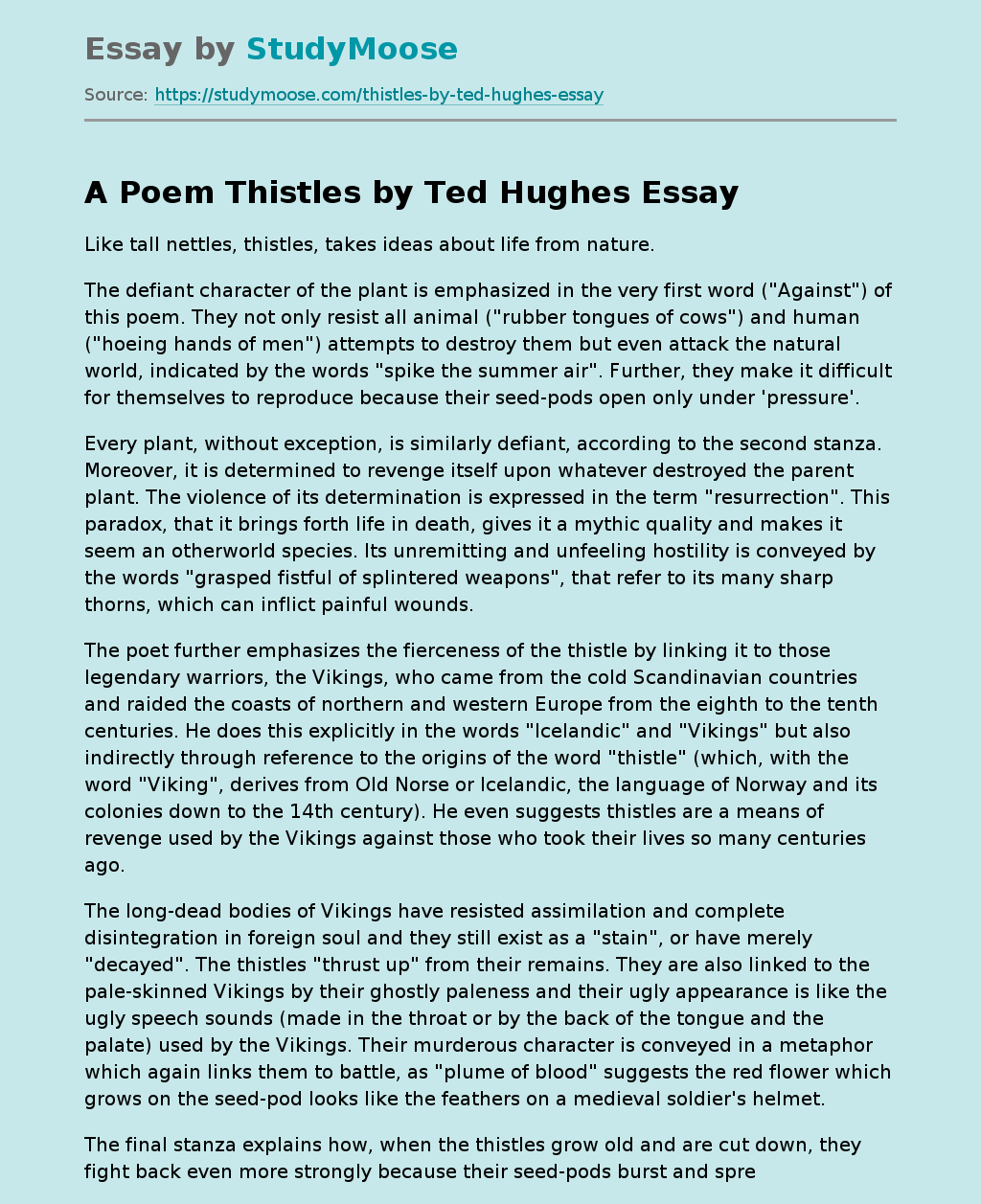