The picture depicts a man who jumped off a plane. The man is slightly off center and is framed by the scene below him. It shows the man’s backside, his arms are spread open, his back is straight and his legs are straight and are close together. The man has contraptions strapped to his body, presumably devices that are attached to his parachute. It also shows the landscape below, a curved street with what looks like side walks or walking paths closely following the wider curved road.

Don't use plagiarized sources. Get your custom essay on
“ Describe the Picture ”
Get custom paper
NEW! smart matching with writer

The roads frame what looks like fields where a big white truck raises enough attention as well. Beside the big white truck are two striped tents and further beyond that are other structures, as well as people who are barely seen because of the distance from which the picture are taken. The people seem to be having a gathering in the wider parcel of field below probably awaiting the skydiver’s landing. Perhaps his skydiving act may be a highlight of the said gathering or event; that we can only assume.

There are also other tracts of land framed by the road which appear clear and empty, devoid of the busyness of the tract of land where the gathering is taking place. Also, on the upper right hand of the picture, one can notice what may be a part of the parachute that the man is using. Two small rivets on one side of the device are seen in the picture but the strings that attach this to the person is not apparent.

It was developed in black and white, which instead of making it dull and lifeless added more elegance and drama to the entire composition of the picture.

It is believed that having the picture in color would be a bit “heavy” on the eyes of the people looking at the picture. This may be particularly true because color may take away the focus on the man who jumped off the place, which is the focal point of the picture, but may focus on the other elements in the same picture. The black and white tone of the photograph also lends hushed tones of grays aside from black and white.

Black is marked by the shadows and some figures on the landscape, as well as the clothes of the man on the picture. The trees and some shrubs are dark grays, while other elements are of a lighter shade of gray. White, on the other hand, is seen in the imposing white truck, the part of the parachute on the upper right part of the picture, as well as other elements such as some of the elements below such as the big structure on the field where the gathering is taking place.

The hazy smoke is also in an almost translucent white. Black and white is dramatically contrasted in the tents also found below. Based on the shadows that are cast as captured in the picture, one can say that the picture was taken when the sun is high on the horizon. This can be assumed because of the tall shadows cast by the trees and other forms set on the landscape below. The sun’s rays are also upon the skydiver, casting it on his head and body. 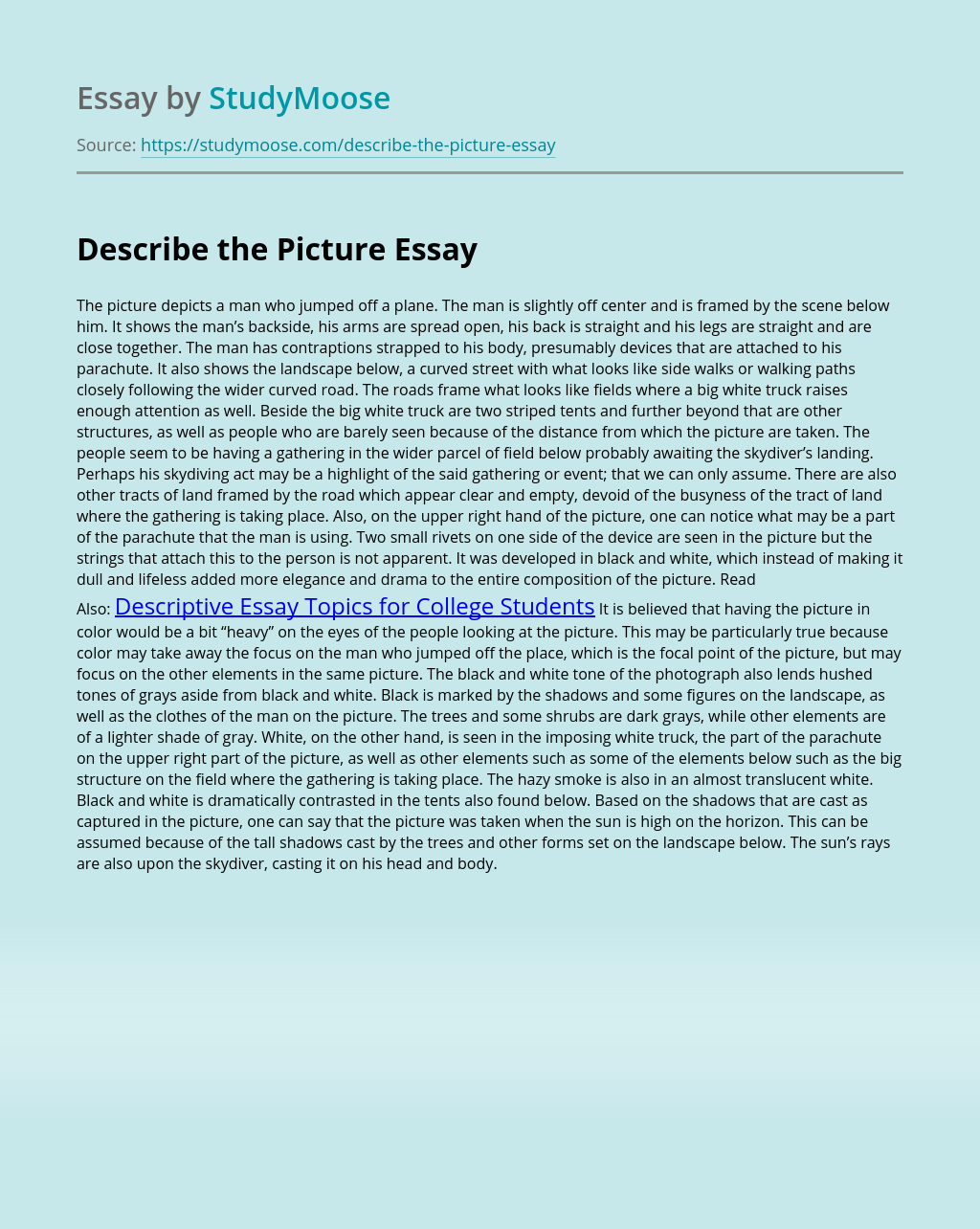