Brand evaluation Chanel Parenty Agathe comal 3B Introduction For this work, I choose the band Chanel because of her world wild recognition but also because I am a huge fan of her creator Gabrielle “Bonheur” Chanel also known as Coco Chanel. History Gabrielle “Bonheur” Chanel is born in Saumur the 19 August of 1883. Her father was a snack trolley man. When she was a child her family used to call her Coco, this is why everybody in her entire life called her Coco Chanel.

Don't use plagiarized sources. Get your custom essay on
“ Chanel Branding Issues ”
Get custom paper
NEW! smart matching with writer

Her childhood was chaotic, her mother died in 1895 and her father send her and her sister in the Obazyne onastery in Correze.

Then, she went to another religious institution in Moulins, where she learnt how to sew. Before she came on age, she left the institution and met Etienne Balsan who was a rich officer. He encouraged her to start as a millenist and she discovered that she got talent in fashion creation. But her independence desire was too strong and she decided to leave Etienne Balsan in a way to have her own shop and work.

Indeed, Etienne Balsan thought that creation was only a hobby while Gabrielle wanted to work. This is the start of her upward mobility. With Arthur

Capel’s help, she opened her first shop in Paris in 1910 at the now famous street Rue Cambon. Three years later, she opened two other stores in Deauville and Biarritz. In 1921, she launched the first Chanel fragrance in association with Pierre Wertheimer, Chanel N05. In 1924, “la soci©t© des Parfums Chanel” was founded to produce and sell perfumes and beauty products.

This was the first Chanel brand stretching, but not the last. In the same time, she launched the first Chanel costume Jewelry collection and got acclaimed by the famous magazine Harper’s Bazzar as “one of the ost revolutionary designs of our time. In 1928, she created “the little black dress” which Vogue magazine called the “new uniform of the modern woman”. Chanel Empire was built. During the Second World War, she stopped her creations and designs and she went out of business. She moved in the Ritz hotel. At the end of the war, she was accused to have an affair with a Nazi officer. So, she left Paris to go to Geneva in Switzerland. Churchill intervened on her behalf and told that she was on a spying mission for the British government.

In the same time, Christian Dior, one of her first competitor designed the “New look” collection which was on the opposite of what Chanel created and what she thought about womans’liberty. In 1953, Chanel came back to Paris to regain her preeminent position into fashion. Her first walk show was a disaster, magazines took her down. But this collection had a great success in the United States and she began to create clothe for films and American’s celebrity. Then, came success with all the most famous creation like her “croisi©re” collection, f fashion.

She received a fashion Oscar for her carrier and collection she designed. Gabrielle Chanel died on January 10, 1971, at the age of 87 years old. It is said that when she died she was “still designing, still working”. In 1983, the German designer Karl Lagerfeld is hired as the Chief designer for Chanel. He is still remembering Chanel vision and thought by creating elegant clothes but simple. “Simplicity is the keynote of all true elegance”. Brand Marketing First of all we are going to talk about the logo. The Chanel logo represents an nterlocking double C (one facing forward, the other facing backward).

As people think, the logo does not come from the first two C of Coco Chanel but from a religious mosaic. When Gabrielle Chanel was in the religious institution she had a lot of time to imagine what her life is going to be. One time, she was in the church, thinking, she saw the interlocking double C and she thought it was a fate sign. But it’s easier for people to think that this logo is from her nickname. And we can say that it helps the brand in recognition. The logo symbolize the brand but also her history. All over the world, people know what the double C means and represents.

The logo represents luxury too. Then, we are going to present the core concept of the brand. The essential main part of Chanel is providing high quality fashion products. Chanel prides itself on providing sophisticated, trendy and refines women clothes, sunglasses, Jewelry, watch, and make up… The brand stands for quality, reliability and appurtenance signs. The brand Chanel claims her luxury appurtenance by designing clothes that can be described as piece of art and history. The brand can be described as being rustworthiness, luxury, unique, classy, elegant but creative.

These values are not claimed by the brand (for example in marketing campaigns or slogan) but leaded when someone talks about Chanel or even when someone Just says the name Chanel. In the 22 September of 2010, Chanel opened a new store in Soho (London). The brand counts 200 stores all over the world. In 2006, Chanel has opened again a big rearranged store in Central Hong Kong. The store has been designed as a flat with library, lounge and private lounge. The shop is spread over three levels (accessories, atches and Jewelry, ready-to-wear).

It has been completely redesigned by Peter Marino with the introduction of new colors, new materials. It welcomes the work of five artists: Jean-Michel Othoniel, Michal Rovner, Franpis-Xavier Lalanne, Vik Muniz and Joseph Stashkevetch. The brand want to extend this kind of concept store in old Chanel shops. Some artists, designers, painters can exposed their works in the store. Chanel’s first mission is to revolutionized Haute Couture fashion. They have to be creative but also maintain classic stylistic cods.

They also want to bring fashion business into part of society. Fashion has always been seen like a hobby but this is true business. Nowadays, fashion luxury is one of the most successful sector. It breed millions of dollars. The third mission of Chanel is to go back to basics designs, elegance, class originality without being popular because that is the point. Being popular is the anti mission of chanel, they want to spring simplicity in Haute Couture but not being popular. An other creed of Chanel is that beauty is about presenting yourself to win respect from others. 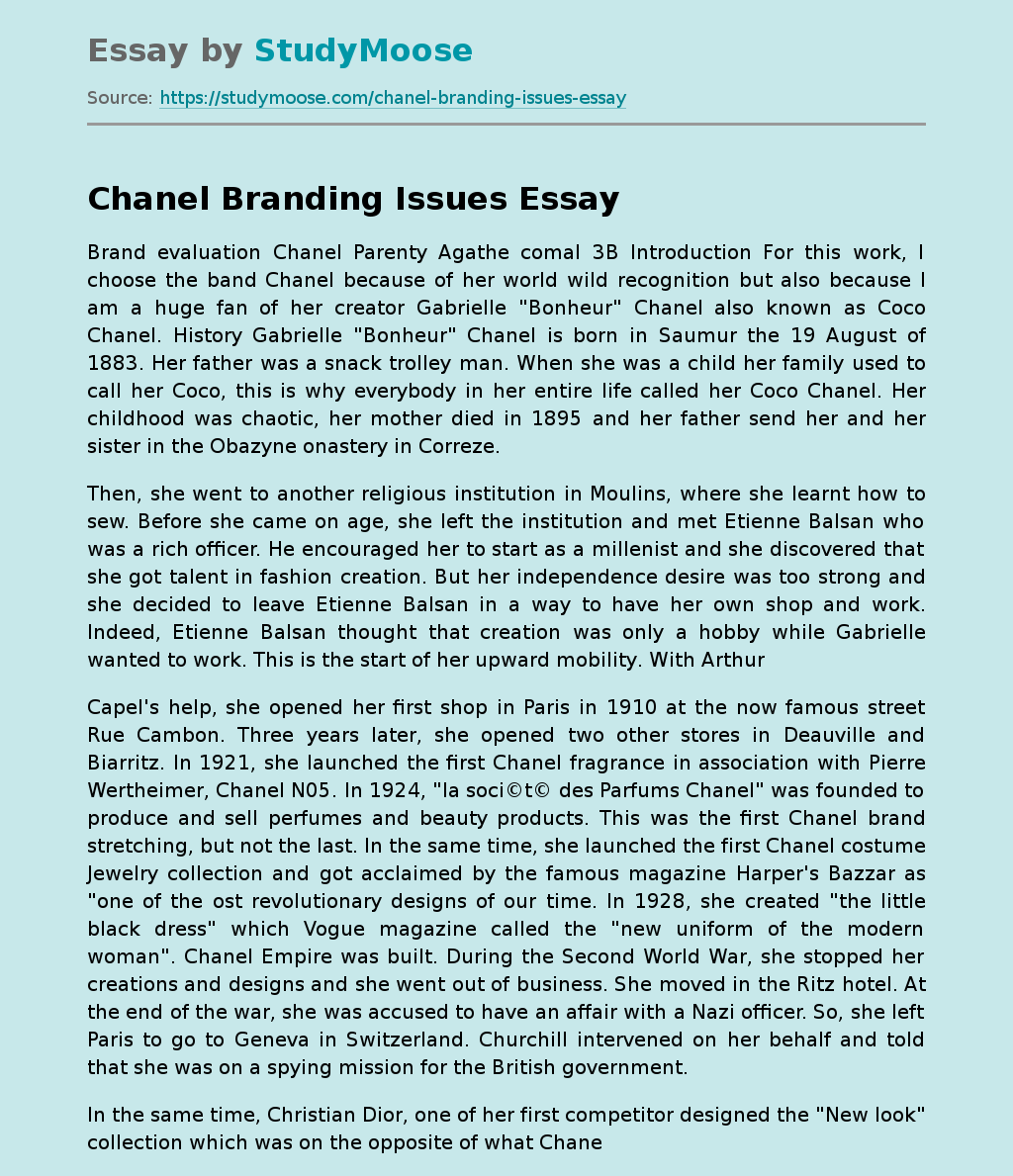