The article, Adam Smith and the Invisible Hand by Helen Joyce, proved to be interesting reading. Although it was written about three years ago and the man himself lived more than 300 years ago, the man and his theories live on through the 21st century. Before I read the article, I had never heard of Adam Smith, but it appears his ideas have penetrated time. I started doing more research into the man and his theories. In order to understand his theories and how he thought about processes, one must understand his beginnings.

Don't use plagiarized sources. Get your custom essay on
“ Adam Smith the Father of Modern Economics ”
Get custom paper
NEW! smart matching with writer

Adam Smith was born in Scotland. He attended Glasgow University then Oxford University. It was his experience in this stay at Oxford that was the basis for the vital observations about universities found in The Wealth of Nations. He was selected as the Professor of Logic at Glasgow and later, Professor of Moral Philosophy. He lectured on spirituality, moral principles and political economy. His first book The Theory of Moral Sentiments established his status.

He sought to understand what it was that led us to care about the welfare of others.

With that book complete, he gave less attention to his theories of morals and more to political economy. Later, he made the decision to give up his university post by becoming a tutor to the Duke of Buccleuch. They traveled mainly in France, where Smith came to know many of the intellectual leaders of the country. He began a dissertation on economics. It was published as The Wealth of Nations, and on this work rests the ongoing acknowledgement of him as the father of economics.

He had very provocative ideas in the book. It was a work that altered the world of economics.

Many say it reformed the world itself. He asserts that wealth is steadily created by rising labor output through two key factors (1) the division of labor, encouraged by trade the “natural propensity to truck, barter and exchange” and also (2) the growth of capital, made possible by the natural inclination of people toward thriftiness. For example, Smith alleged that a system of natural liberty allowed the self-interest of the person to be attached for the good of society, through what he called the “division of labor and the accumulation of capital. He argued that the free market is an clever device which regulates itself through supply and demand.

His purpose was pretty clear: not to advance the interests of any class, but to push the wealth of the entire country. Whatever a nation consumes must be either produced from its labor or purchased in trade. There is no other basis for spending or a standard of living. He assumed that, in fiscal life, the main inspiring force central to man’s actions was self-interest. He argued that, with the right institutional frame, men following their own self -interest would serve the general good.

This framework did not call for wide government law. The best plan is to leave the fiscal method alone. This has come to be known as free enterprise. Largely through his book, these principles helped to guide the then rapidly increasing economic activity. And wealth, as he saw it, consisted of goods which all people could consume. This was a democratic; and for that time, radical principle that he adhered to with notable stability. He produced a document that he expected to be used in the conduct of governments. The book presents a persuasive argument for a new approach to economic policy.

Smith offered future economists with the makeup of the discipline of economics. His vision of a competitive market balance following a path of growth to wealth and abundance defined the problems that economists have wrestled with ever since… His purely scientific contribution has been vast, and in its basic structure his framework still remains the heart of modern economics. On one level, it is an attack on the opinions of his people written for its own time and directed against the existing policies of government.

On another level, it is an optimistic thesis that deals with basic troubles of order in human society… It is an enthralling mix of ideas. In the most radical age of Western culture, when the uproar of social and intellectual upheaval puzzled lesser men, Adam Smith gave the world order. He did not invent the market or economics. He taught the world about them. For nearly 75 years, his writings supplied most of what economists knew. If there are more people per the amount of GDP, the standard of living is lower. If there are fewer people, it is higher.

The GDP per capita the measure of the wealth of the nation is the product of the amount of labor productivity of that nation. The available land or other natural resources is not a decisive factor. He provided the root details of what causes labor productivity to be high or low in a nation. The theme of the book is explaining how labor productivity is resolute by the extent of the division of labor the dividing of work into a much greater number of parts. When the market is very small, when the population density is sparse, it is impossible to achieve much in the way of a division of labor.

The more people that could crowd into a place, the greater the amount of specialization among occupations and the greater the marginal productivity, rather than the lesser. There is still controversy about Adam Smith and his account on “the invisible hand. ” Simply put the invisible hand is a notion based on the law of chance. Every person intends only his or her own gain, but though a set of policies that he referred to as the “system of natural liberty” the good of the nation would be the accidental result. His “invisible hand” is the new method of social life.

He described “the invisible hand” in this way: Individuals naturally intend only their own gain, but unintentionally promote the general interest. He also suggests that ethics is based on “sentiment,” feelings of empathy between us and other people. He wrote consider how others would fairly judge their behavior before acting on matters that would involve conscience or moral judgment. The best course toward “wealth” and away from poverty and want is for a nation’s political rulers to allow for the unplanned result of self-interest, of private property rights, and of self-regulating rivalry under rules of free trade.

As the economy globalizes, corporations flourish, and as societies agonize over which issues to settle according to the principles of right and wrong and which to settle according to economic principles. We see the tension between choosing to adhere to the ancient values of tradition, honor and command, or to the modern values of the business firm and the marketplace. The future global economy will tell if the invisible hand is a principle to rely on now and in the future. Though he passed away in 1790 his ideas have surely helped shape the way economists around the globe think, globally. 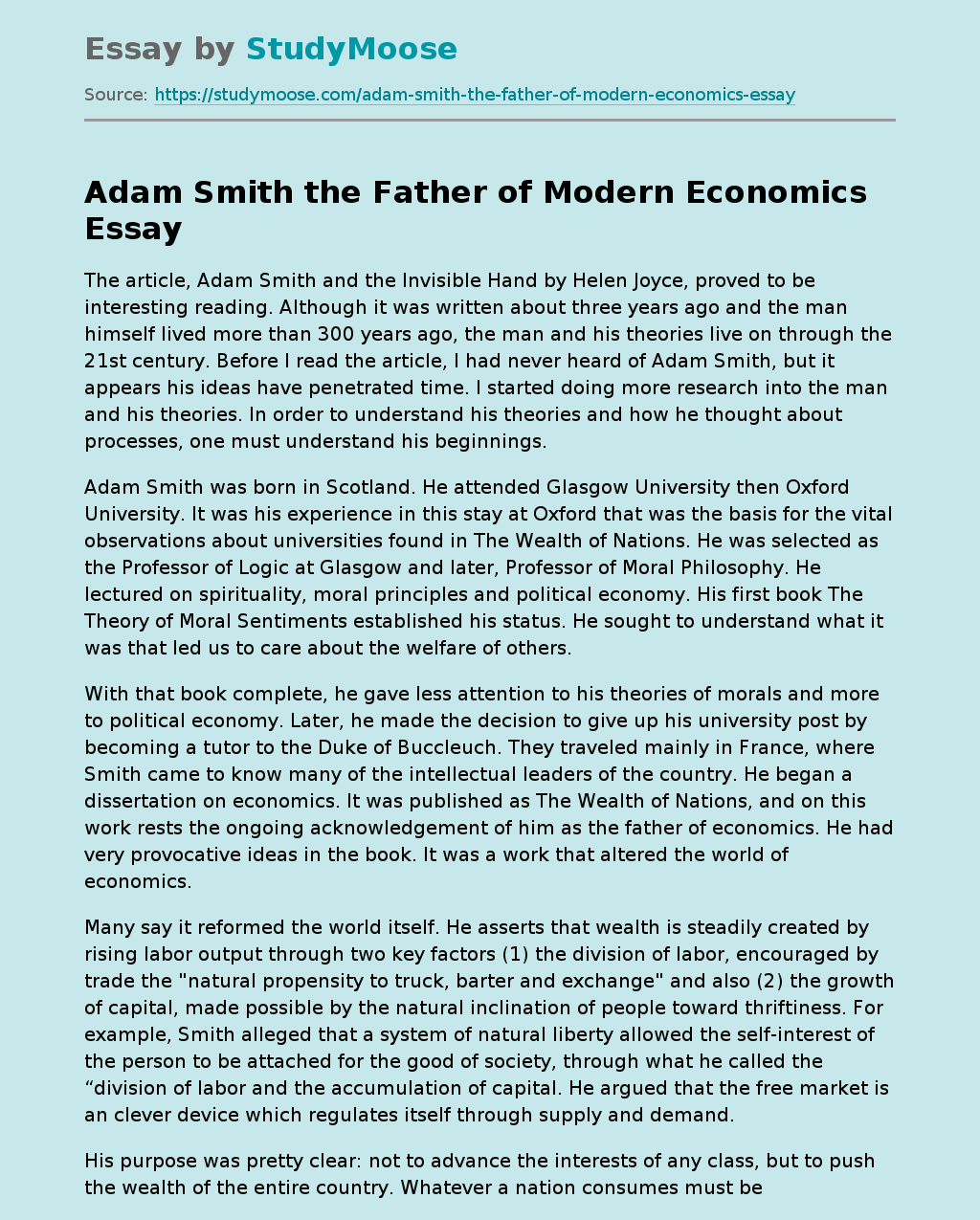