Fashion is not something that exists in dresses only. Fashion is in the sky, in the street; fashion has to do with ideas, the way we live, what is happening. This is a quote by Gabrielle Chanel known as Coco Chanel, the iconic French fashion designer. This speech will be about Coco channels early life, early career and her legacy as a designer. Body EARLY LIFE: Gabrielle Bonheur Chanel was born on 18 August 1883 in France, Her mother was a laundry women and her dad was a street vendor who led a nomadic life style.

At age 6 her mother passed away, with both parents absent, coco chanel was sent to an orphanage.

Growing up in an orphanage she learned to sew and at age 18 she left the orphanage to go work at a local tailor. Later when asked, Coco chanel said that her mother passed away when she was 12 instead of 6 and her father sailed to America after that and she was sent to live with her cold hearted aunts, all that to try to diminish the poverty and orphan hood in her background.

Her nickname Coco was given to her by soldiers when she used to sing in local cafes and concert halls. EARLY CAREER Through her love affairs with several wealthy and powerful men over time, Coco was able to start designing and opening her first shop in 1910.

From that point on wards, Coco paved her way to be a fashion force to be reckoned with. She was the first designer to introduce loose women jersey’s, after that the iconic Chanel number 5 fragrance was launched and after that she launched chanel signature cardigan and the year after she had a huge success with channels little black dresses.

During World War 2, Chanel worked as a nurse, but her post-war popularity was diminished because of her affair with a Nazi officer during the war and she moved to Switzerland to escape the controversy. In 954 she ended this self-imposed exile and continued to develop her line which became a hit in US although it was banned by the press in Europe. LEGACY AS A DESIGNER Fafe u write on this part and add wtever u wnt on the other parts CONC ‘Don’t spend time beating on a wall, hoping to transform it into a door’ this sentence was said by Coco, showing her determined and ambitious personality to achieve her goals regardless of her background. She succeeded in business even though she wasn’t a business women, making her the only female designer who appeared on Time magazine’s list of the 100 most influential people of the 20th century. 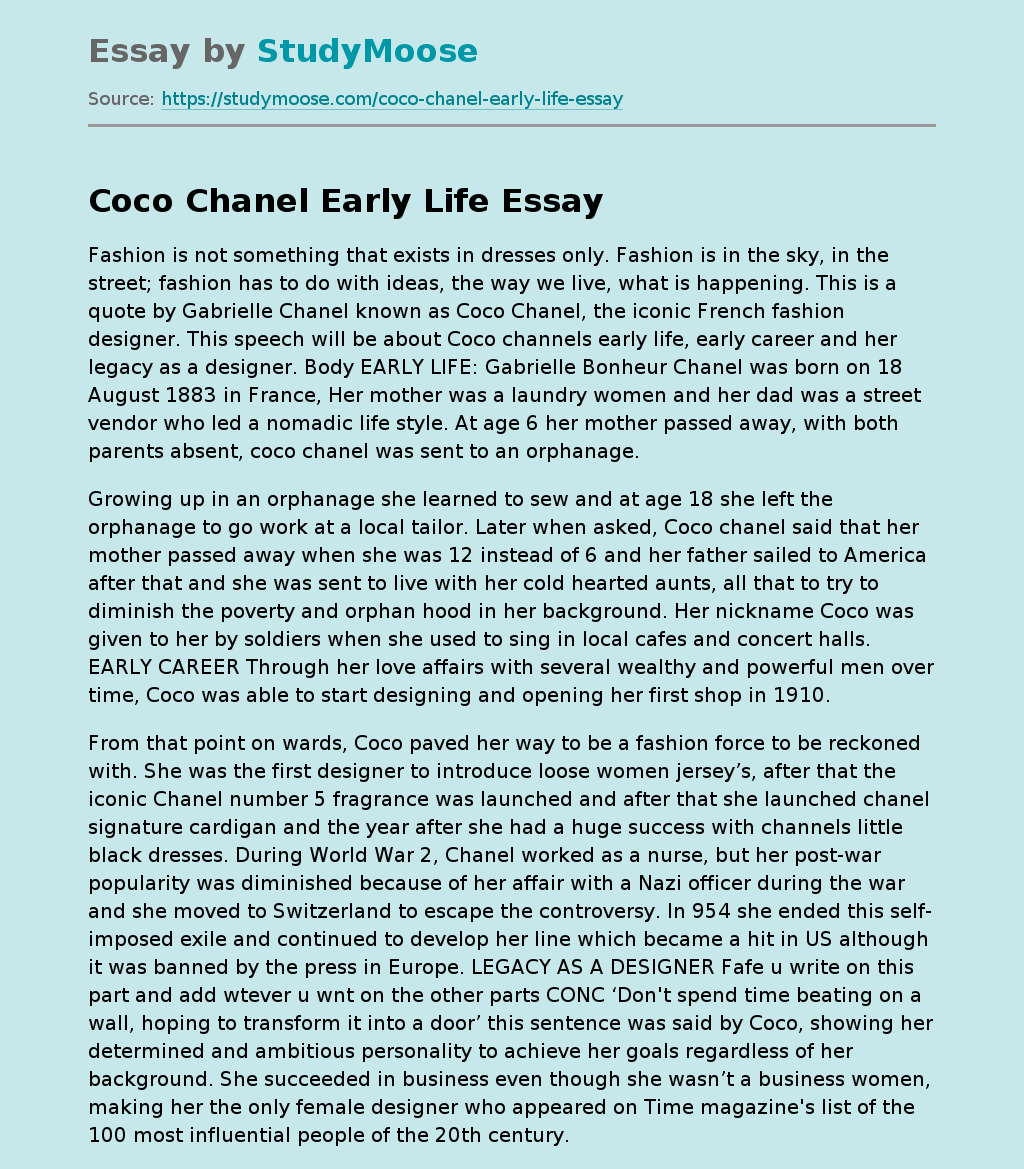