Gabrielle (Coco) Chanel was born on August 19, 1883 as a second child of an unmarried couple (the couple got married later, when Gabrielle was 1 year old). Her father was a small-wares peddler, her mother came from a family of a peasant. A little girl was named Gabrielle Chanel. Her mother died when Chanel was twelve years old. One week later she was abandoned by her father, who left her to be raised by the nuns in a provincial orphanage.

There was no future, at that time, for a poor girl brought up by the charity.

Don't use plagiarized sources. Get your custom essay on
“ Gabrielle Coco Chanel ”
Get custom paper
NEW! smart matching with writer

But the dream for escape was made in her mind at this early age. Never in her life would Coco Chanel mention her younger years spent in orphanage. She would work relentlessly to erase all the traces of the unhappy fate that had been meant for her.

Coco Chanel Biography – beginning of her career Several years passed at school before the young girl would try to make a start.

At first she began as a shopkeeper specializing in linens and small wares. Later she would try to sing and dance, with an idea to make a career in the theatre. These attempts would not bring her any luck, with an exception to the nickname Coco acquired at that time. The nickname “Coco” had been given to her by her audience for her songs “Ko Ko Ri Ko” and “Qui qu’a vu Coco”.

At the age of twenty-two Coco Chanel met Etienne Balsan, a gentlemen horse breeder and riding enthusiast, and accepted his proposal to live together.

She would enjoy her life in a castle, even though she would never get used to her position of an official mistress. What did she really want? To make a career for herself as a modiste – a milliner.

Coco Chanel would soon meet another person who would find a merit in her idea and would help her change her life completely. This was an Englishman Arthur Capel, known to his friends as “Boy”. She could have never before imagined herself together with a man who was so enterprising, athletic and, despite his youth, already an important businessman. He helped Chanel to open her first milliner shop in Paris in 1910, and later in 1913 her boutique in Deauville, France.

Coco Chanel Biography – The Woman Entrepreneur Once she opened her business and began to apply her taste and capacities to it, she would change into a woman entrepreneur forever. Nothing would stop her: not the lack of experience, not even the war that soon exploded. For the rest of her life she would work as both craftsman and businesswoman, implementing her own view of the art of dressing on her ever expanding clientele…

She started as a hat maker to the divas, and they revealed her name to Paris.

Her business would soon grow into something never known in the history. Traditionally, dressmakers had never been part of a “society”. But Coco Chanel changed that. Coco Chanel became a magnetic person, international figure invited everywhere. It did not seem to surprise her at all. She commented: “I did not go into society because I had to design clothes. I designed clothes precisely because I did go out, because I was the first to live the life of this century.”

Coco Chanel received the attention of high-born, aristocratic suitors, like Grand Duke Dimitri of Russia and Duke of Westminster. She was surrounded by the creme de la creme of the society, the most famous women and men of her time.

At the age of fifty-five, Coco Chanel was in the prime of her beauty. Her face, like her figure, had reached their ultimate refinement. She had never dressed with more invention or with a greater perfection. At that time she was the most admired and most invited. People proved to be more interested in her face, photographers were passionate about it. These were the golden years in Coco Chanel biography. 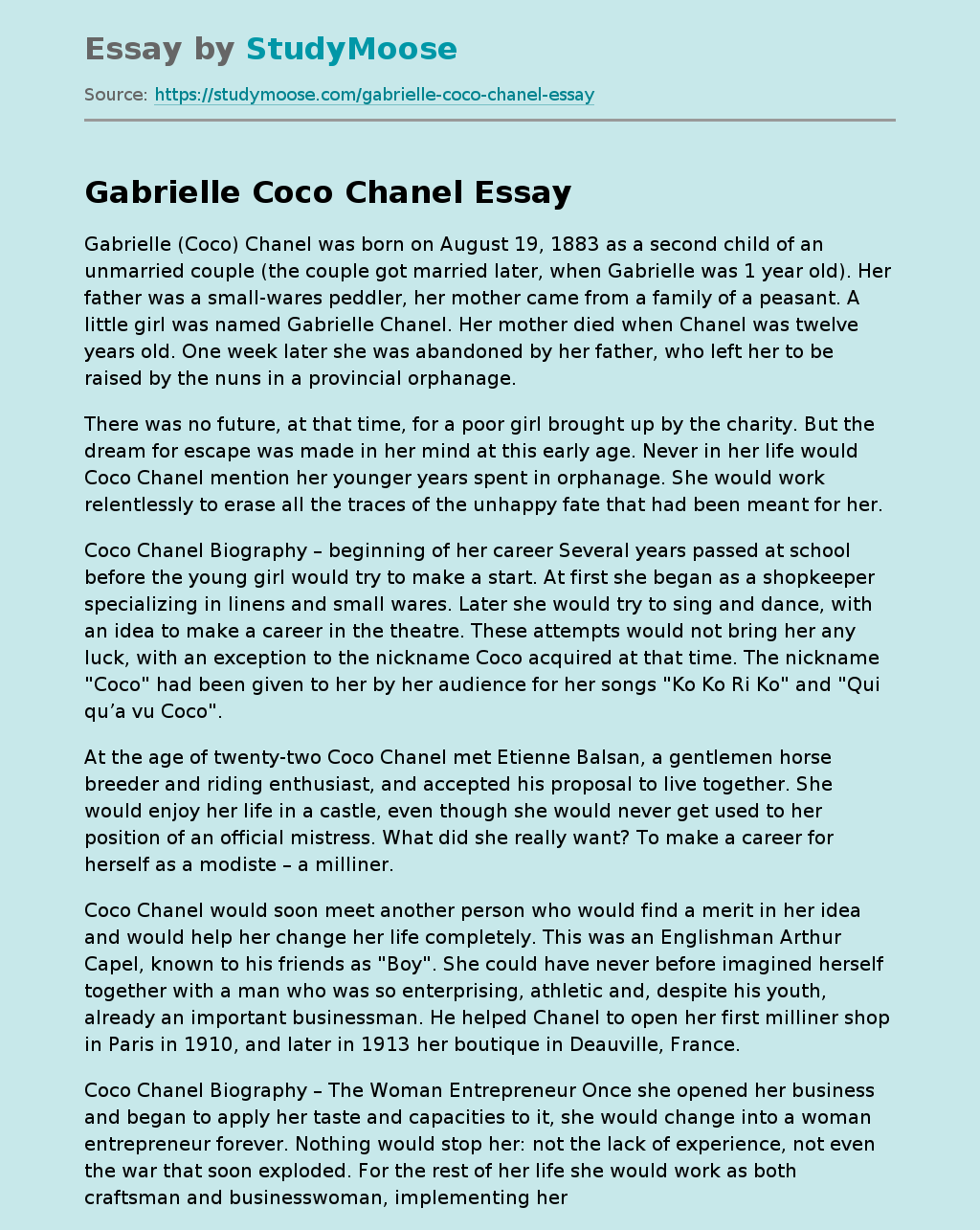