Sinclair Ross’ short story The Painted Door takes place on an isolated farm during the Great Depression, whose closest neighbor, Steven, is two miles away. The isolation is even intensified in this story due to the horrible snow storm. Ann’s husband John braves the weather to visit his father, leaving her all alone, but on his way he stops by to tell Steven to go play cards with his wife. In situations where people are experiencing strong emotions such as fear, desperation, or, as in the case of this story, extreme loneliness, it tends to bring out their true characters.

Don't use plagiarized sources. Get your custom essay on
“ Sinclair Ross’ “The Painted Door” ”
Get custom paper
NEW! smart matching with writer

We can see this by analyzing the traits of John, Steven and Ann.

John, “a slow, unambitious man, content with his farm and cattle”(48), is completely devoted to doing what he thinks is going to make his wife happy, when what she really just wants is his company. He goes through his farm work, without any hired help whatsoever, in hopes that one day he can provide Ann with nice things.

Proficient in: The Painted Door

His devotion, mixed with simple-minded bravery, is why he had trudged on through winter storms twice a week to see Ann before they were even wed. Those treacherous icy conditions are why it’s truly evident how caring a man he is.

His devotion to trying to make Ann happy goes even beyond braving the weather: He catches Steven in bed wither her, but silently leaves, letting her be with him if that’s what she wants.

John is slow and kind, but Steven is quite the opposite.

He is not a cruel man, but definitely has cruel intentions from the first moment he steps into Ann and John’s house. From the very beginning he is continually assuring her that it’s “too rough a night, even for John”(60); that he would more than likely stay the night at his father’s instead of going out in that weather. He senses Ann’s weakness and loneliness when he arrives, finding that she has tried, and failed, to do the evening chores in that freezing temperature.

It’s almost as if Steven knows the entire time how this is going to play out, for he says, perhaps with a trace of arrogance, “I’d think twice myself, on such a night, before risking even one [mile]”(63). It is as if he knew that he would be spending the night there with Ann.

Unlike Steven, Ann feels incredibly guilty over what they have done. She gives in to the temptation because she feels exceedingly lonely, but also because she is bored with her life. “Year after year their lives [go] on in the same little groove”(51) and she is left alone for the majority of the time while John slaves in the fields. Of course all this is made worse by the isolating blizzard, and when you throw in a man who is considerably better looking and more confident…well, this is the perfect recipe for adultery.

Throughout the story she admits to herself of her feelings of loneliness and how she longs for companionship, and admits to being bored with the life she is living, but not with John himself. Steven comes, and just before he goes off to do the evening chores for her she realizes how different he is from John, and that he “rouse[s] from latency and long disuse all the instincts and resources of her femininity”(58). When Steven comes back she has even put on a different dress and tidied her hair. This tells us that deep down she too knows what is was going to happen.

After the deed is done, though, Ann sees Steven for what he really is because he feels no guilt, and she realizes too late that John has been the one all along. She had decided to paint the main room to keep her mind and body occupied during John’s absence, and while she is left alone with his dead body that is discovered out in the cold, she sees a touch of the white paint on his hand.

In this story we can see how isolation can bring out the true characters of people, whether they be good or bad, and perhaps also change how a person perceives a situation. It makes us wonder though if anything would possibly have ever happened between Steven and Ann had they not the opportunity in that storm.

The Painted Door by Sinclair Ross 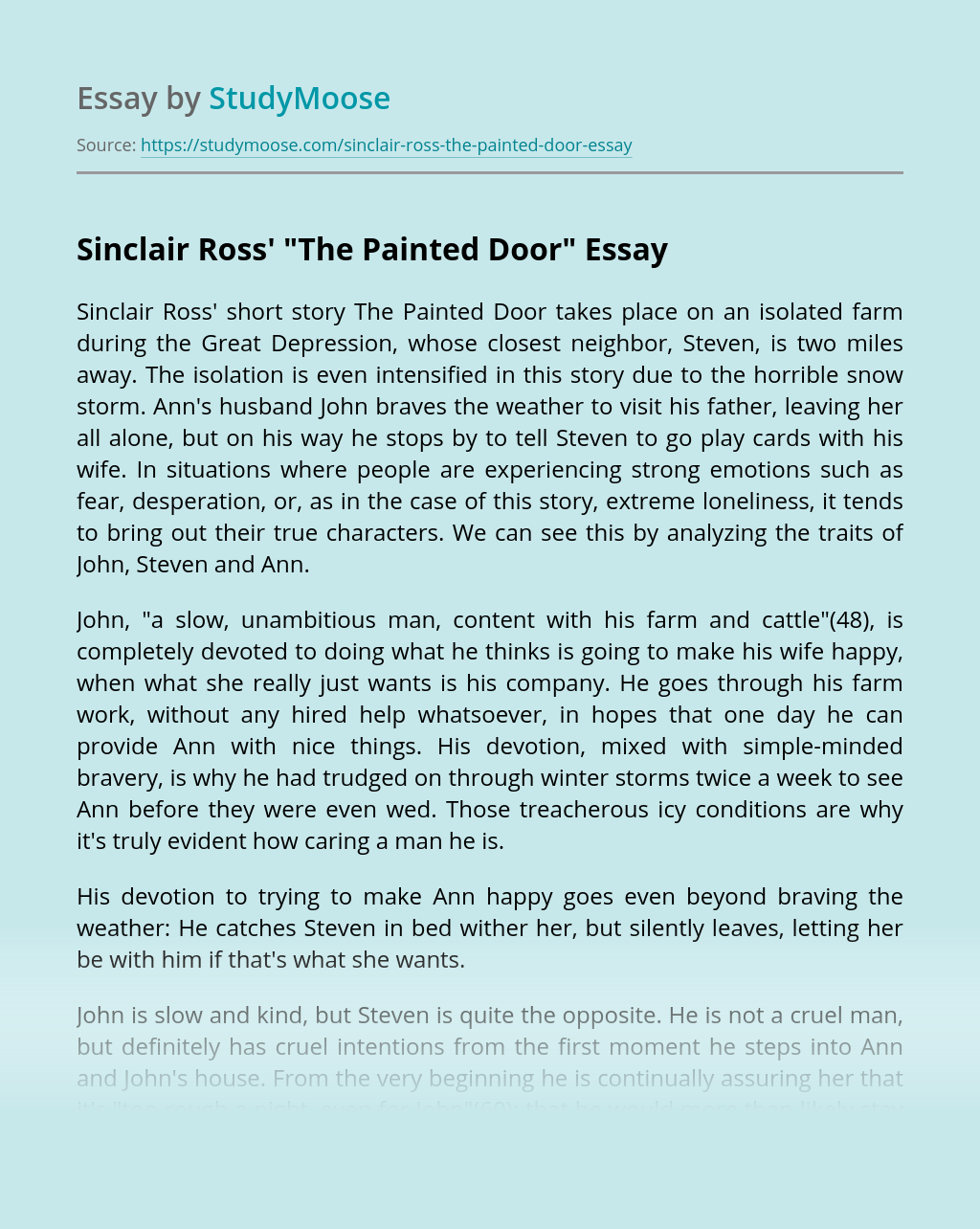