The Jungle Book by Rudyard Kipling

Through Kipling’s published fictional literature, he has served as both educator and universal influencer. The controversy surrounding his literature has garnered much attention for the author. While some have accused him of spewing imperial propaganda in the underlying storylines of his books, his works remain critically acclaimed by just as many. His educational philosophy largely focuses on the progression of bourgeois boys into prime liaisons for the British empire. Kipling’s literature in The Jungle Books also reveals what appears to be a strong influence from the Darwinist school of thought while his Just So Stories is commonly described as a series of Lamarckian apologues.

Don't use plagiarized sources. Get your custom essay on
“ The Jungle Book by Rudyard Kipling ”
Get custom paper
NEW! smart matching with writer

Despite numerous claims like these, Kipling has spoken upon these points with great abhorrence to the notion that his literature could be linked to propagandize Darwinian thought. Written in private correspondence, Kipling went as far as to say “I’ve been trying once more to plough through The Descent of Man and every fiber…of my body revolted against it.

(Letter to Edmonia Hill.)” While this statement may seem to stand as an outright contradiction to scholarly criticism suggesting otherwise, it may just be due to a misreading of how Darwinism was defined in the period of Kipling’s writings. Kipling wrote from a narrative that described the advancement of mammals although not strictly in the Darwinian method so many assume he used. At the cusp of the 20th century, Darwinism was not simplified to be understood as “evolution by natural selection” as it is today.

Rather, it served as more general term for anything related to the history or science of evolution. As the terminology and use of popular theories can be interpreted differently in their respective eras, it is possible to come across seemingly antithetical interpretations of Rudyard Kipling’s literature. Kipling found himself at the forefront of the resurgence of Lamarckism, an increasingly popular school of thought referred to as the “eclipse of Darwinism” in the 19th century. The cultural logic of Lamarckism prevalent in the minds of Victorian Imperialists can be seen as an underlying narrative in Kipling’s Eurocentric Mowgli Tales.

While Darwinists believe that individuals are either possess or do not possess certain traits from birth, Lamarckian hold that traits have the ability to develop over a lifetime. In relation to Kipling’s writings, Lamarckian logic can give to a narrative of individual development as it highlights the influence of cultural settings and life-changing experiences. By using Lamarckian ideas, Kipling has allowed for Mowgli’s growth to happen in the span of his Jungle Books. The Mowgli tales prove to be far less Darwin- centric if it is to be read in the context of other literary texts during the Victorian era.

Lamarck’s theory of the inheritance of acquired characteristics stood as a significant precursor to the Darwinist movement. Found in a selection of original texts on 19th century science, Lamarck writes,

“Needs which are always brought about by the environment, and the subsequent continued efforts to satisfy them, are not limited in their results to a mere modification, that is to say, and increase or decrease of the size and capacity of organs; but they may even go so far as to extinguish organs, when any of these needs make such a course necessary” (Weber, 60)

This basic idea of acquired characteristics out of necessity and likewise the extinction of other characteristics, remained in the writings of Darwin. In Darwin’s book The Origin of Species, Darwin expounded upon much of what Lamarck had theorized yet there remained fundamental issues that Darwin could not solve in his lifetime. Darwin theorized that it was within nature for certain traits to live on after proving as an advantage although he was not able to conclusively say why variations came into existence to begin with. It was these flaws that allowed for Lamarckians to insert their own explanations into incomplete Darwinian concepts. (Still reading what exactly the Lamarckian explanations were. As of now, still a little confusing to me.)

In Kipling’s, Jungle Books, Mowgli rise to “Master of the Jungle” is not just a story of maturation. Rather it fits well into a Lamarckian narrative of a development brought on by an evolving environment. Kipling puts great emphasis on Mowgli’s active recollection of the education most notably given to him by Bagheera and Baloo as well as his original clan, the wolves. In the segment titled “Kaas Hunting,” Mowgli is kidnapped by a troop of monkeys. The boy must use his vast knowledge of animal languages to alert his allies of his predicament. Proudly, Baloo notes, “He has not forgotten to use his tongue. To think of one so young remembering the Master Word for the birds too while he was being pulled across trees!” (Kipling, 34). Kipling stresses the importance of Mowgli’s ability to recall such an array of languages.

In “Red Dog,” a chapter from the second book, Mowgli need not recall old memories of lessons given to him. The lessons he has learnt from the jungle have become a part of who he is. Recognition of this transformation is seen as Mowgli reflects, “…Mowgli the Wolf have I said that I am. Now Mowgli the Ape must I be before I am Mowgli the Buck. At the end I shall be Mowgli the man” (Kipling, 291). This excerpt suggests an upwards progression that has taken place in his lifetime as he goes from living with a surrogate wolf-mother to becoming part of human society.

The Jungle Book by Rudyard Kipling. (2021, Dec 07). Retrieved from https://studymoose.com/the-jungle-book-by-rudyard-kipling-essay 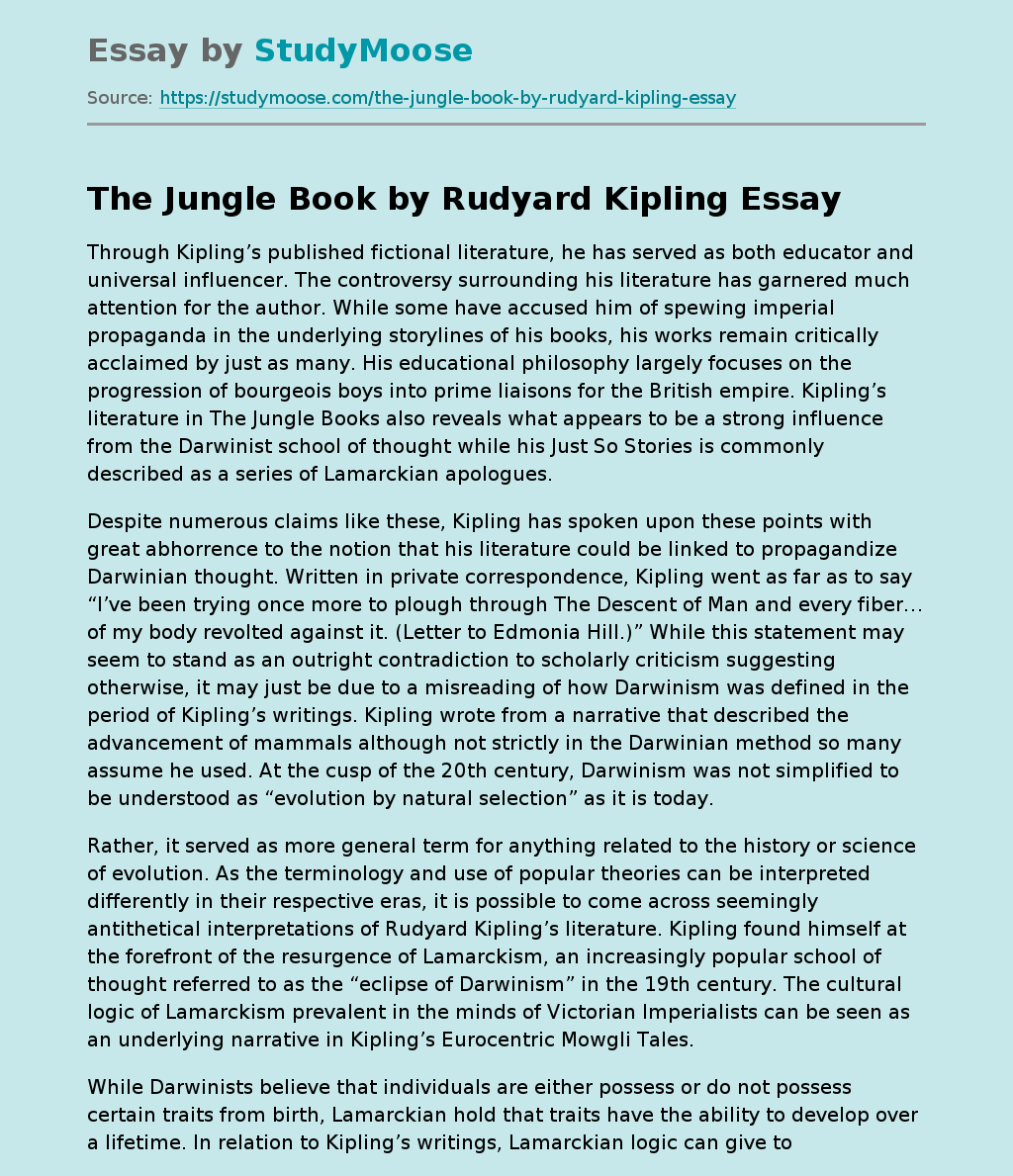