The Gardener By Rudyard Kipling

It can be seen in “The Gardener” by Rudyard Kipling that the relationships are very complex. For example Helen Turrell, Michael Turrell and the gardeners relationship can be perceived in many different ways. The most likely scenario is that Helen is the mother, Michael the son and the gardener is the son resurrected but to determine this each of the characters need to be examined. To establish this theme it is best to look at the three main interpretations, Kiplings own history and his religious beliefs.

Don't use plagiarized sources. Get your custom essay on
“ The Gardener By Rudyard Kipling ”
Get custom paper
NEW! smart matching with writer

By doing this it is possible to discover what Kiplings intentions were with the characters in question. It is subtly suggested throughout the story that Helen Turrell is Michael’s biological mother. The opening paragraph explains that Helen Turrell is sister to recently deceased George Turrell, when he died he left a scandal in his wake of an illegitimate baby in India. Helen was suffering health issues and recovering in France, she returns back to her home in hampshire with her nephew Michael.

Helen ‘most nobly took charge’ Kipling. R (1927 p. 79) by deciding to raise Michael revealing to her friends the events that lead to her new position ‘Helen was as open as the day’ (p. 279) by informing all her friends of the scandal as she believed ‘scandals are only increased by hushing them up’. Although it could appear to be just as it is, Kipling leaves a margin for conspiracy to form and it is highly coincidental that Helen is away from prying eyes during the whole embarrassing event.

It is also convenient that the nurse who bought Michael from Bombay was ‘dismissed due to carelessness'(p. 279).

This all suggests that George’s story was created as a cover. When Kipling himself talks about the relationship in his diary “Have begun a few lines on the story of Helen Turrell and her ‘nephew’ and the gardener in the great 20,000 cemetery. ” Lewis. L (2004, para. 9). By putting nephew in quotation marks Kipling is suggesting Helen is more than just an aunt. The gardener is the only character to acknowledge Michael as Helen’s son “Come with me”, he said, “and I will show you where your son lies. ” (p. 289) this can be perceived in many ways by the reader.

When looking at the gardener there are many different views to be accounted for, some believe the gardener is an intuitive man, he worked at Hagenzeele third and had seen the grieved so often it might be that he was able to tell the difference between a grieving aunt and a grieving mother. Another choice is that the gardener is God or a higher being, Kipling was a religious man “as a freemason he believed in a god” Aidin. M (2007, para. 18) “Masons believe in a supreme ruler of the universe” but he did not necessarily believe in the Christian God.

The reader could also consider that the gardener was her nephew resurrected, there to help Helen find him in her time of need, the story has similarities to that of Mary Magdalene mistaking christ for a gardener in the Gospel of John (20:10. 18) during christ resurrection “Thinking he was the gardener,”. As Kipling himself believed in resurrection, this is the most likely version. Although Helen does not question his position in the story and sees him only as the gardener the final sentence suggests more ‘ and she went away, supposing him to be the gardener’.

It could be argued that Helen had raised Michael as her own, she could have considered Michael to be her son even though biologically he was not. Michael becomes curious about his origin as he grows up, at the age of six he asks Helen ‘why he could not call her Mummy’ (p. 280) to which it is explained that ‘aunties were not quite the same’. Helen allows him to call her mummy but only during bed-time and to keep the ‘pet-name’ secret. When Michael overheard Helen telling her friends it evoked an intense argument but it ends in them being closer ‘the wail of mummy! mummy! drew her back again, and the two wept together'(p. 281).

At the age of ten he again questions his ‘civil status’, Helen ‘breaks down’ which predominantly prevents the conversation being discussed until much later when Michael suffers from measles, ‘he muttered of nothing else,’ and once more ‘Helen’s voice, reached him with assurance that nothing on earth or beyond could make any difference between them. ‘ (p. 281). During both episodes Helen and Michael’s relationship grew stronger than one would expect from an aunt and nephew. “Kipling shows how the internalizing of love and the struggle to contain and measure it against conventional standards fracture the relationship between mother and son.

They both suffer; they inflict pain in each other” Kemp. S (2004, para 24). This could be seen as confirmation for the mother and son relationship. Comparisons can be made with Kiplings life as he lost his own son during World War One. John Kipling also known as Jack suffered from very poor eyesight he was not allowed to join, “John only obtained a commission because his father pulled strings” Aiden. M. (2007, para 14). Kipling felt a tremendous amount of guilt following his son’s death, “One does not know how much Rudyard’s great grief was due to a sense that he was responsible for John’s fate. “Aiden. M. (2007, para 14).

The Gardener” was written 17 years after Jack died, “The Gardener represents one of Kipling’s most personal works of fiction–but this is true not only because the story reflects Kipling’s anguish over the death of his son,” Trout. S (1998 p. 1,para 5) in the story Kipling could be trying to put across some of his own feelings about the death of his son. It can be seen that there are many interpretations regarding the main relationships in Kiplings “The Gardener”. It is most likely that Helen and Michael are mother and son, this due to the closeness of their relationship and that of Kipling and his own son.

Although some critics believe they are aunt and nephew there is much more evidence to suggest otherwise. It is clear that Kipling has written from his own experiences as well as from his own religion. Helens meeting with the gardener and its uncanny similarity to the story of Mary Magdalene and Christ’s resurrection. This could be why Kipling chose the gardener as the final confirmation to Helen’s lie. Not only is “The Gardener” a touching story of a mother losing her son in World War one, it is also Kipling portraying his own guilt due to the loss of his.

The Gardener By Rudyard Kipling. (2016, Dec 19). Retrieved from https://studymoose.com/the-gardener-by-rudyard-kipling-essay 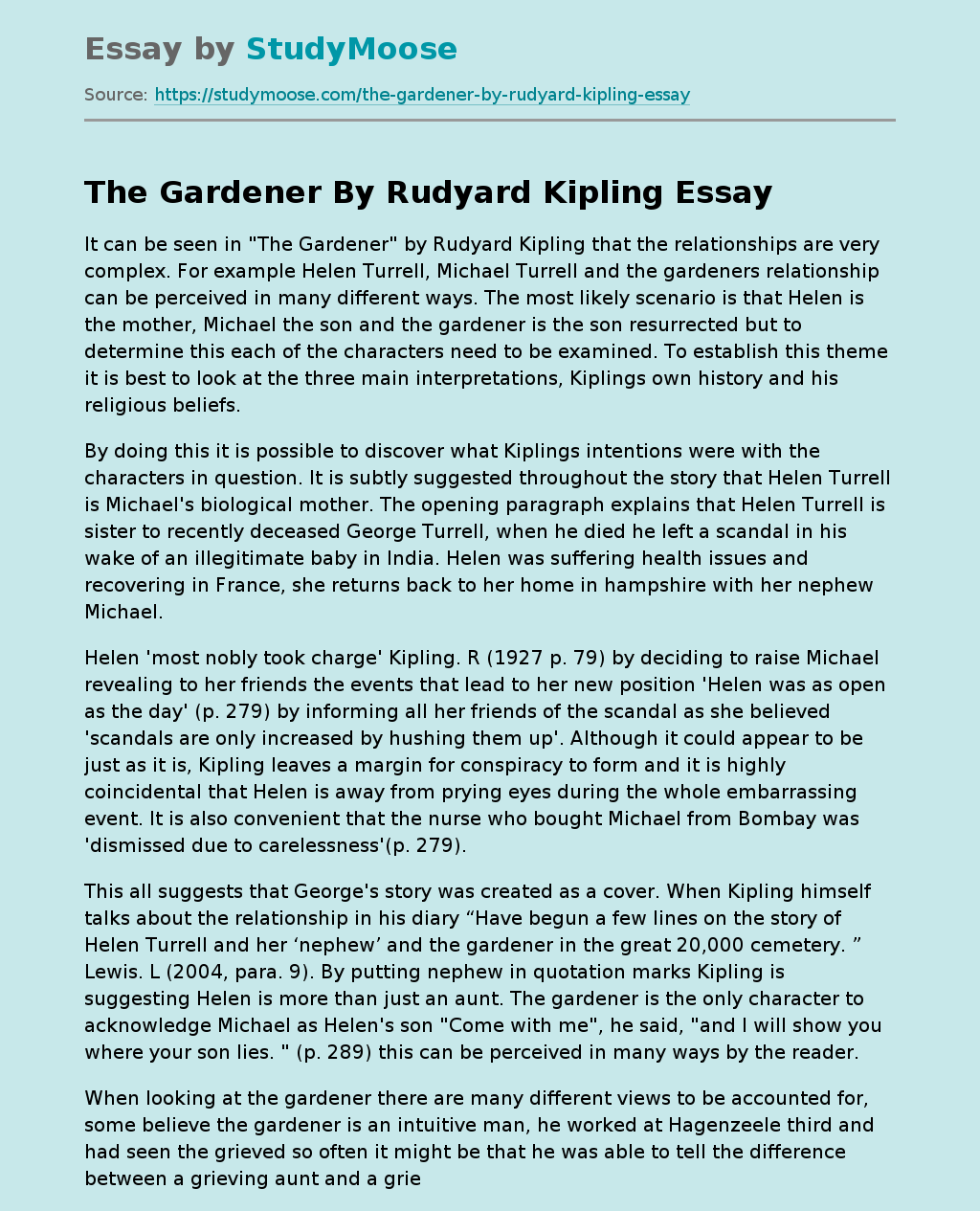