To Kill a Mockingbird vs If by Rudyard Kipling

The relationship between the book To Kill A Mockingbird by Harper Lee, and the poem If by Rudyard Kipling is astonishingly similar. Although If was published nearly 140 years before the publishing of To Kill A Mockingbird, many readers have come to the conclusion that If was written based on To Kill A Mockingbird. However, when discovering the dates that each of the pieces were published, it is found that the bond between the two are just mere coincidences. Characters such as Atticus, Jem, and Calpurnia have various traits portrayed in the poem.

Don't use plagiarized sources. Get your custom essay on
“ To Kill a Mockingbird vs If by Rudyard Kipling ”
Get custom paper
NEW! smart matching with writer

Lawyer Atticus Finch, as well as a wise yet humble father, seizes a great deal of dilemma and predicaments within To Kill A Mockingbird. Harper Lee created Atticus to appear as a righteous man, especially when looked upon by his children; but also appear as a cunning and confident lawyer. Throughout To Kill A Mockingbird, Atticus demonstrates that despite the consequences of doing the “right” thing, what is believed to be right is likely the choice one should make.

In If by Rudyard Kipling, he describes someone with characteristics similar to Atticus; such as being courageous and honorable. In If, the lines “Or being hated, don’t give way to hating, and yet don’t look too good, nor talk too wise”, are great representations of Atticus. In these lines, Rudyard Kipling is inspiring the reader to discover an advanced foundation of reality and provides a source of hope that gives strength to ignore insignificance or prejudice.

It is relate the lines from If to lines such as “If you just learn a single trick, Scout, you’ll get along a lot better with all kinds of folks.

You never really understand a person until you consider things from his point of view… until you climb inside of his skin and walk around in it” (32) From To Kill A Mockingbird. Atticus says this to Scout teaching him that one shouldn’t “judge” or make “assumptions” of someone until you know them and appreciate them thoroughly; it is not possible to hate or look down upon one if you don’t know them personally.

Another motivating character from To Kill A Mockingbird that is depicted in If is Calpurnia; a modest woman who works for Atticus and his family. Although Calpurnia is viewed to be more of a “maid” figure throughout the book, she manages to teach Jem and Scout valuable life lessons. During chapter 12 in part 2 of To Kill A Mockingbird, Calpurnia takes Jem and Scout to her church and the two get a whole new outlook on her. They distinguish that Calpurnia has an altered way of conducting herself around these people.

When Jem questions Calpurnia on why she behaves the way she does, she responds by saying “Suppose you and Scout talked colored-folks’ talk at home it’d be out of place, wouldn’t it? Now what if I talked white-folks’ talk at church, and with my neighbors? They’d think I was puttin’ on airs to beat Moses. ” (167) She is basically stating that what is accepted in one place may be declined in another. However to the Finch children this is a difficult topic to grasp because they have always looked up to Atticus.

However, Atticus is a white male, who is accepted whether he changes his ways or not. Lines such as “If you can talk with crowds and keep your virtue, or walk with Kings—nor lose the common touch, if neither foes nor loving friends can hurt you,” from If designate Calpurnias words to Scout and Jem perfectly. To be able to involve oneself with two types of people or communities and yet be able to maintain authentic qualities is something many strive to become. Jem Finch, an innovative, young, and free spirited child of Atticus.

Jem may be young but he does however inherit Atticus’ wise ways and this is perceived several times throughout To Kill A Mockingbird. Jem looks up to Atticus as Scout looks up to Jem. For as young as Jem may be, he has a way of comprehending much about Atticus and Calpurnia’s similar outlook of their society. As visibly portrayed in the book, Jem follows the trial as his father Atticus continues to represent Tom Robinson, who so happens to be a colored man. The Tom Robinson trial had an immense influence that shaped Jem to who he became at the end of the book.

To Kill a Mockingbird vs If by Rudyard Kipling. (2016, Sep 14). Retrieved from https://studymoose.com/to-kill-a-mockingbird-vs-if-by-rudyard-kipling-essay 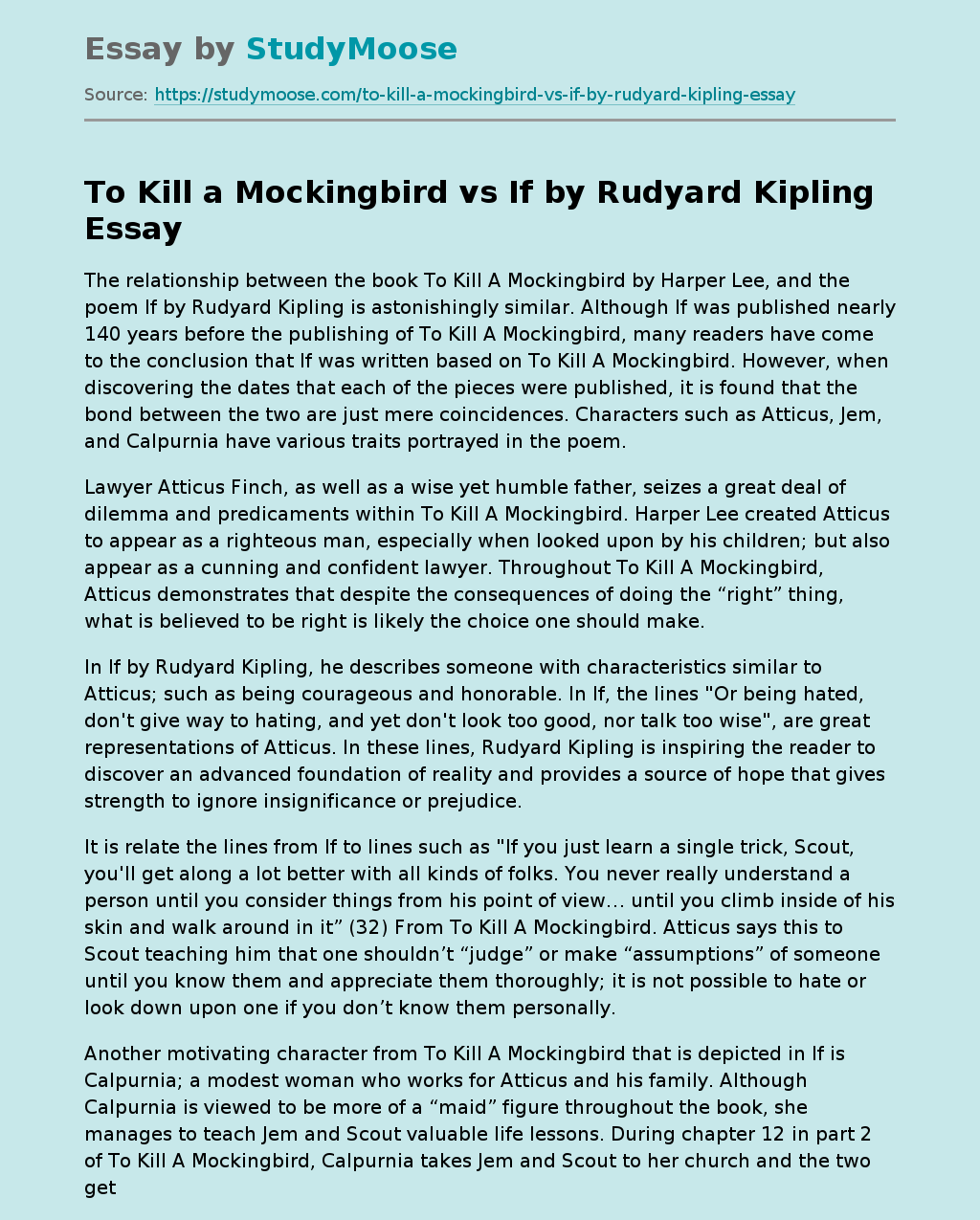