To Kill A Mockingbird Vs. Time To Kill

Under what context do you usually expect the word courage? Probably somewhere other than it should be. Most people confuse courage with valor, which is heroism in a great battle or cause. What about people who aren’t famous or special, can’t they show courage too? In truth, a better definition of courage could be doing your duty, even if you know you’ve lost. This definition given by Atticus Finch, a courageous man similar to Jake Tyler Brigance. Though both of these men are not immensely strong or overly special in any one way, both somehow are courageous.

Don't use plagiarized sources. Get your custom essay on
“ To Kill A Mockingbird Vs. Time To Kill ”
Get custom paper
NEW! smart matching with writer

Atticus and Jake show different levels of courage throughout several scenes in the book involving a show of honesty and righteousness, a few of which occur during both trials of the black men.

Though he did not have to, Atticus takes the Tom Robinson case. The Robinson case is difficult and harrowing, and tests Atticus fully. The main plot and central themes gravitate towards the main idea of Atticus battling racism and segregation while trying to fulfill justice. Jake shows courage throughout the film in a very similar situation, striving to see justice given to Carl Lee Hailey and at the same time juggling more personal problems like family and friends.

Even though Carl Lee faces racism from everywhere and everyone, Jake shows that he truly is innocent. Jake’s family and friends have a significant influence on his actions and reactions throughout the trial of Carl Lee. Though the outcome of the two trials were different, Atticus and Jake show immense courage and wisdom throughout the cases, dealing with family and personal issues at the same time as professional issues and “justice.”

Tom and Carl, two key characters around which the novel and film circulate, show courage in their own way as much as Atticus and Jake did. Tom goes up onto the stand and recites what happened from a neutral, third-person view. This act must have required immense courage and bravery, since going up in front of a jury of white men and telling them right to their faces they should accept a black word over a white word would have been death for him surely, had he been acquitted. He also showed his courage simply by walking by the Ewell’s house every day; though some black men could do it, a crippled one would not stand a chance if he were attacked. Carl’s situation was different; he acted out of retaliation as opposed to defense. Carl’s actions, though aggressive, served justice fully no matter what the jury thought. By taking justice into his own hands, Carl was promising himself salvation, in the court and in his own soul. Carl Lee Hailey and Tom Robinson showed just as much courage as their lawyers did, if in different ways under different circumstances.

Atticus and Jake together with Tom and Carl demonstrate how courage can be defined as doing your best no matter what the outcome may be. The lawyers and their defendants show that normal people can be more truthfully courageous than heroes and warriors. Atticus was courageous by standing alone between racism and justice; he knew that he did not have much chance at defending Tom and his own family from the mobs, but he tried anyway because he believed it was right. This is similar to how Jake had to protect his family from the Ku Klux Klan and other bigoted people, while trying to save innocent Carl and serve truth at the same time. He too did not have to take up the responsibility, but did it to fulfill his own sense of rightfulness and integrity.

Carl, on the other hand, knew that if he were to shoot two white men he would most likely lose his life to jail or death penalty, no matter that they had raped his daughter. Basically, he knew he was defeated before he began; he either had to live with the rape of his daughter or do something about it, so he went out and did something about it and sacrificed himself. Tom showed courage by walking by the Ewell’s house every day; in his slow and humble ways he calmly spat defiance at racial segregation and did what he thought was right. By standing up for justice no matter what the outcome may be, the two white lawyers and the two black defendants proved that they have what it takes to make a courageous man.

To Kill A Mockingbird Vs. Time To Kill. (2016, Jul 13). Retrieved from https://studymoose.com/to-kill-a-mockingbird-vs-time-to-kill-essay 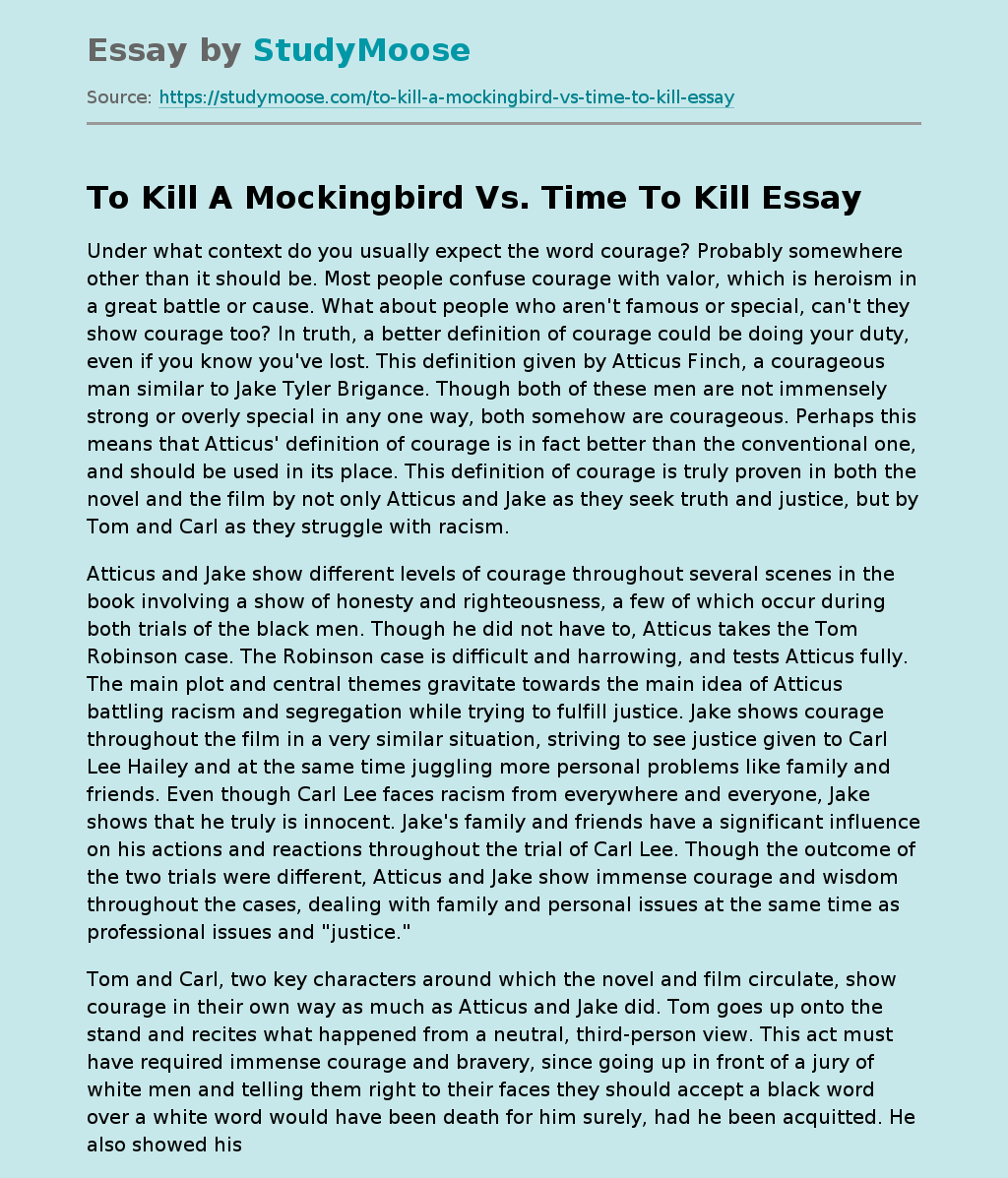