Examples of Jim Crow Laws in To Kill a Mockingbird

This quote was referring to the ghastly Jim Crow laws. The Jim Crow laws arose in the south in 1890 and restricted the way African Americans could participate in society. These laws had a vast influence on the novel To Kill a Mockingbird by Harper Lee being that this novel took place in 1930’s Alabama.

Don't use plagiarized sources. Get your custom essay on
“ Examples of Jim Crow Laws in To Kill a Mockingbird ”
Get custom paper
NEW! smart matching with writer

Specially, these laws influence the novel with examples of segregation, Dolphus Raymond, the outcome of trial and Tom’s death, and people’s views on Atticus. Allow me to further elaborate on these ideas.

First, Jim Crow laws influence To Kill A Mockingbird by showing many examples of racial segregation due to the laws. An example of this is the novel, is how the blacks and whites have different churches.

During the time of the Jim Crow laws, churches fell into fixed segregation almost instantly (press.princton.edu p.1). Another example of this in the novel is how in the courtroom there is a section for blacks and a section for whites. In addition to this, when Jem and Scout go and sit in the black section, they are frowned upon. According to the Jim Crow laws, there must be separation between blacks and whites at government facilities, such as in courtrooms (christanpost.com p.1). In To Kill A Mockingbird, there is a separate community for the blacks and whites.

The Jim Crow laws state that blacks and whites are not allowed to live on the same block (herritagecenter.com p.2).

Second, Jim Crow laws influence To Kill A Mockingbird with Dolphus Raymond. Dolphus Raymond is the town “drunk” and a scandal in Maycomb due to his interactions with black people. According to the Jim Crow laws, intermarriage was not allowed (people.sju.edu p.1). Although Dolphus does not directly break this law, he comes close to it due to the fact that he has slept with black women and had mixed children. This action is breaking a law of society. Additionally, during the trial he sits in the black section of the courtroom. This goes against the law because as I previously stated, according to the Jim Crow laws, there must be separation between blacks and whites at government facilities, such as in courtrooms (christanpost.com p.1).

Additionally, Jim Crow laws influence To Kill A Mockingbird through people’s viewpoints on Atticus. Unlike the rest of Maycomb, Atticus does not prejudice towards back people and throughout the novel silently, and not so silently protests the Jim Crow laws, which makes people dislike him. Additionally unlike the rest of Maycomb, Atticus is not under the Jim Crow spell. The Jim Crow laws were almost like propaganda towards black people, putting the whites under a “spell”, therefore them disliking blacks (find.galegroup.com p.3). Atticus protests these laws by defending Tom Robinson, not allowing Jem and Scout to use racial slurs, and viewing Calpurnia as equal to his family (enotes.com p.2). However, people highly disprove of Atticus’s thoughts and discriminate against him by saying he is a “nigger-lover”. Lastly, Jim Crow laws influence To Kill A Mockingbird during Tom Robinson’s trial and his death.

Due to the “spell” that I preciously stated, everyone in Maycomb county automatically assumes Tom is guilty. I was basically impossible to win this case because it was putting a blacks man’s word against a white man’s word. Additionally during the trail, Tom accidently says he felt bad for Mayella and everyone is flabbergasted. A white man feeling bad for a black man was unacceptable (writework.com p.3). Tom is shot 17 times and killed while attempting to escape the prison that he is being held in. Who knows if this story is creditable? According to the Jim Crow laws, in prisons, blacks and whites were to have separate sleeping and eating spaces, therefore suggesting that treatment in the black spaces of the prisons may have been unfair (nps.gov p.2). Overall, the Jim Crow laws had an immense effect on the novel To Kill A Mockingbird. Specially, these laws influence the novel with examples of segregation, Dolphus Raymond, the outcome of trial and Tom’s death, and people’s views on Atticus. Overall, in the name of the Jim Crow laws, “separate but equal”.

Examples of Jim Crow Laws in To Kill a Mockingbird. (2016, Mar 06). Retrieved from http://studymoose.com/to-kill-a-mockingbird-32-essay 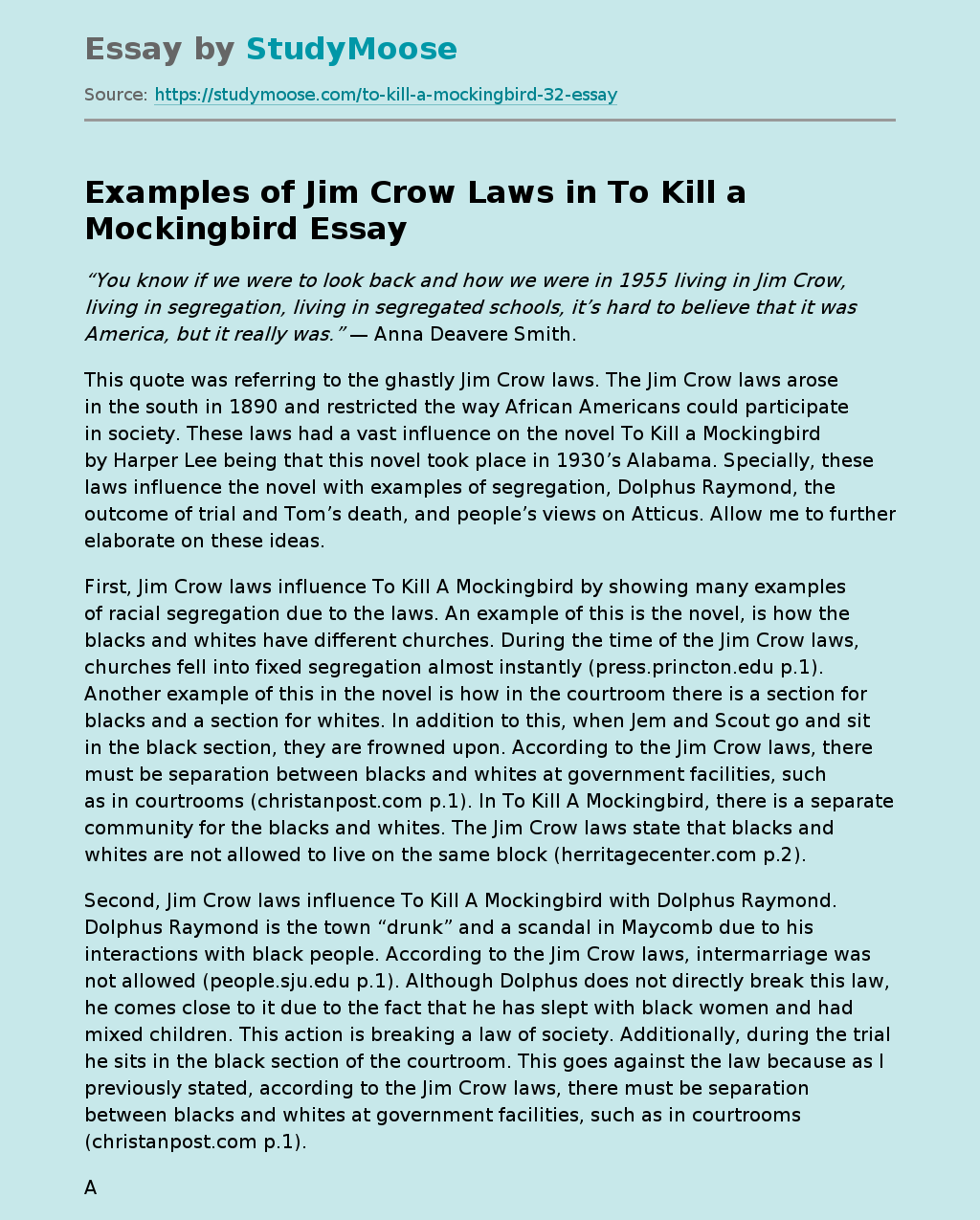