In the novel ‘To Kill A Mockingbird’ by Harper Lee, learning to “walk about in someone’s skin” is a main theme, particularly as two of the main protagonists Jem and Scout learn to do this as they grow up throughout the book along with the reader. Atticus, the children’s father, educates the children on how to treat and comprehend other people. As Jem and Scout grow older in the novel, they begin to understand this lesson and act upon it both knowingly and sub-consciously.

Scout empathises with Walter Cunningham during school at the beginning of the book. When her teacher, Miss Caroline offers Walter a quarter because he has no lunch (Walter’s family can not afford it and so he says he’s forgotten it) and refuses it, Miss Caroline can not see why and so continues to offer it with growing impatience. Scout empathises with how Walter is feeling at the time and so on his behalf explains why he has no lunch and why he will not accept her offer; “The Cunninghams never took anything they can’t pay back – no church baskets and no scrip stamps.

They never took anything off of anybody, they get along on what they have. They don’t have much but they get along on it.” She did this to spare his embarrassment. Scout goes on to say, “You’re shamin’ him, Miss Caroline.” This shows her understanding of Walter’s perspective at that time and also how she tries to spare him by explaining to the teacher.

Early on in the book, Jem can already step into someone else’s shoes and empathise with them to see their perspective. The reader knows this when Jem confronts Scout after she beats up Walter Cunningham at school and he says, “Come on home to dinner with us Walter.” This shows Jem’s maturity and ability to empathise with those around him as he knows that what Scout did to Walter was wrong and he was able to see this by looking at it from Walter’s perspective. He also defends Walter when Scout wants to fight him. Scout says, “I stomped at him to chase him away, but Jem put out his hand and stopped me”.

By also having a sense of initiative and good morals, Jem knows to invite Walter back to the house with them for dinner to apologise and show courtesy towards him. Also, Jem knows that Walter will have no dinner that day and that the Cunninghams would not accept anything they couldn’t pay back. He also knows that his family couldn’t afford to eat as well as the Finches. By empathising with Walter, he sees how hungry he must be and so invites him to eat with them.

Scout shows empathy for Jem by voluntarily accompanying him to read to Mrs Dubose when he is made to do so after destroying her flowers because she said horrible things about Atticus. For Scout, Mrs Dubose is a distressing object who then becomes the power over her afternoons forcing her and Jem to read to her. Scout decides to go with Jem a she knew he didn’t want to do it as Jem says, “Atticus, it’s all right on the sidewalk but inside it’s – it’s all dark and creepy. There’s shadows and things on the ceiling…” She goes with him even though she doesn’t like Mrs Dubose because she knows that Jem wouldn’t want to be alone reading to her and so Scout thinks it would be better if she goes along.

Scout also sympathises and shows empathy for Mrs Dubose, despite her feelings toward her. She says, “I felt sorry for her. She was lying under a pile of quilts and looked almost friendly.” This shows Scout empathising with Mrs Dubose as she sees that she is ill, and can see how much pain she must be in. However, it’s not until after she dies that both Scout and Jem fully understand how Mrs Dubose must have been feeling: Mrs Dubose was a morphine addict who was determined to kick the habit before she died and so enlisted Jem and Scout to help keep her off of the morphine for longer and longer periods of time (without them knowing). Atticus wants them to empathise with her so they can see how much courage she had and learn “what real courage is, instead of getting the idea that courage is a man with a gun in his hand.”

They both begin to understand why she was the way she was and see that she was actually a “great lady”, “had her own views about things” and died “beholden to nothing and nobody.” The reader sees that Jem in particular empathises with her at the very end of the chapter when Scout says, “He picked up the camellia, and when I went off to bed I saw him fingering the wide petals.” This shows that Jem was now beginning to understand and think about Mrs Dubose in a new light and he could now see her perspective. She was not just a bitter old lady. She was a courageous woman who stuck to her opinions right to the end and was determined to be rid of her morphine addiction before she died.

Later in the novel when both the children have matured since the beginning, Scout has found herself involved in the ladies meeting by Aunt Alexandra and realises what it is like to be a lady. After hearing the horrid announcement of Tom Robinson’s death, Scout sees how affected by the news Aunt Alexandra is she till retains her lady-like manners as she has company. Scout thinks, “After all, if Aunty could be a lady at a time like this, so could I.” Scout allows herself to place others’ problems and emotions into her own perspective and as a result enhances her own actions with those who were affected.

Jem not only learns to empathise with people throughout the novel but also other living beings. When Scout is about to kill a roly-poly (an insect), Jem says, “Don’t do that, Scout. Set him out on the back steps.” He does this because “they don’t bother you” so Jem knows that they are no harm and killing them would be wrong. This shows that his understanding of empathy has deepened.

Finally, Scout empathises with Boo Radley by the end of the novel. Even before Boo Radley saves them, Scout begins feeling guilty about the way they had treated Boo Radley in the past summers; “I sometimes felt a twinge of remorse when passing by the old Radley place, at ever having taken part in what must have been sheer torment to Arthur Radley – what reasonable recluse wants children peeping in through his shutters, delivering greetings at the end of a fishing pole, wandering in his collards at night.” She understands how Boo Radley feels. After being rescued, she begins to start empathising with Boo without even realising; “Feeling slightly unreal, I led him to the chair farthest from Atticus and Mr. Tate. It was in a deep shadow.

Boo would feel more comfortable in the dark.” She is thinking about what Boo Radley would like and feel more comfortable with, rather than thinking about things just from her view. After standing on Boo Radley’s porch after walking him home, Scout mentally imagines what Boo had seen all these years through the window. She realises she understands that “Atticus was right. One time he said, you never really know a man until you stand in his shoes and walk around in them. Just standing on the Radley porch was enough.” Boo Radley’s world was everything outside his four walls. With this final insight of human nature, Scout has learnt what Atticus had been teaching her throughout the novel.

Harper Lee’s novel ‘To kill a Mockingbird’ illustrates how to “walk about in someone’s skin” through the protagonists Scout and Jem as they learn this lesson along with the reader. As their understanding grows – in particular Scout’s as she is the narrator – the reader’s understanding also grows as when the children learn and understand something, we also do. If we could get more people to empathise with others like both Scout and Jem in the novel, we could eliminate the prejudice that still exists in the modern world. Having Jem and Scout grow up during the book make them characters that we can empathise with and so helps enforce the lesson that Harper Lee wanted to communicate to the reader. If everybody did finally “climb into his skin and walk around in it” then maybe we could understand that we have more in common with all types of people regardless of race, nationality, gender etc. Referring to what Atticus says at the end of the book, most people are nice “when you finally see them”.

Empathy in 'To Kill a Mockingbird'. (2016, Mar 19). Retrieved from http://studymoose.com/empathy-in-to-kill-a-mockingbird-essay 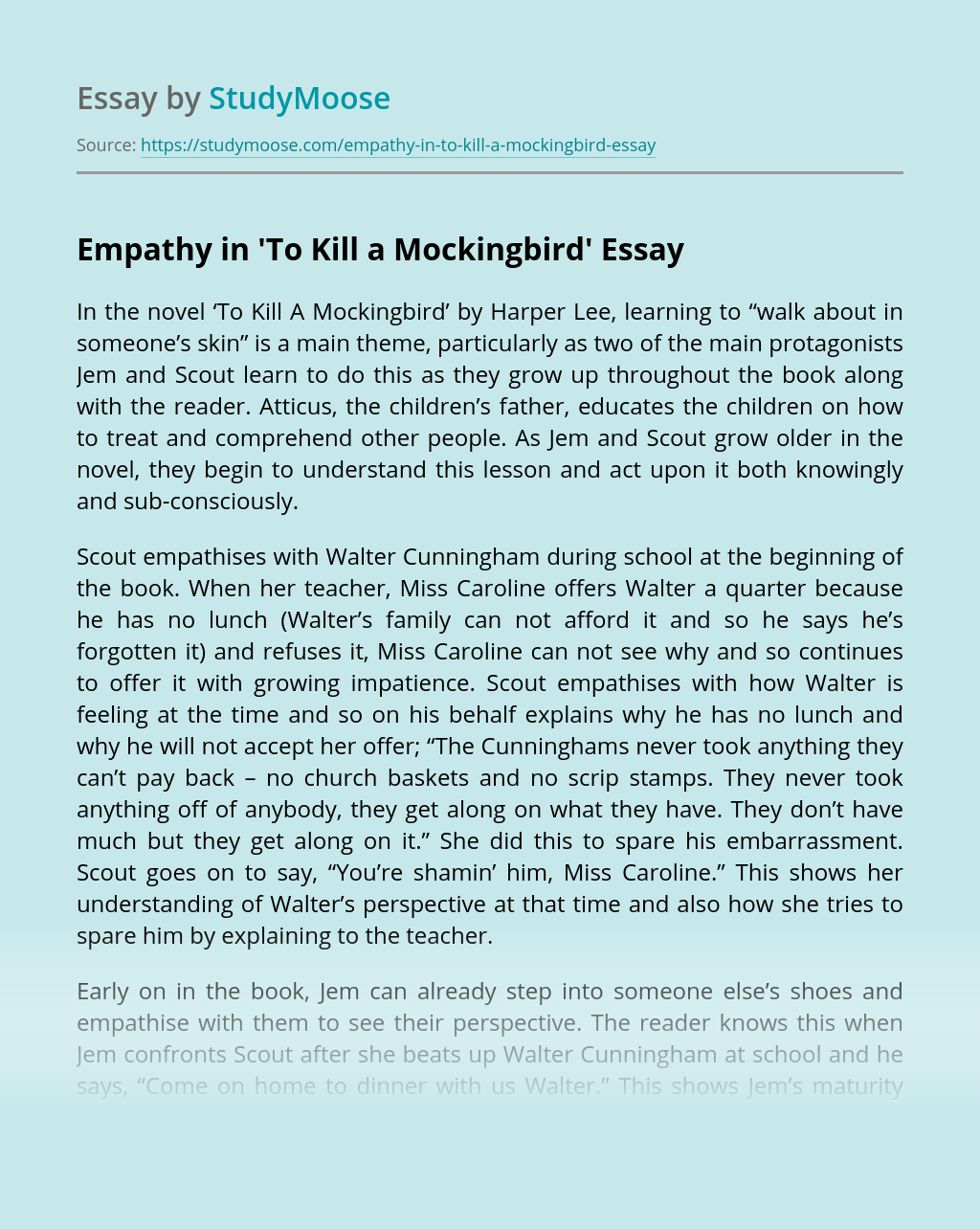 Don’t waste time
Get a verified expert to help you with Empathy in ‘To Kill a Mockingbird’
Hire verified expert
$35.80 for a 2-page paper
Stay Safe, Stay Original