To kill a Mockingbird: Historical Background

In the period prior to the Civil War, enormous divisions had already developed between the northern and the southern states, with the people in the North being more industrialised, believing that slavery was morally wrong. The South however, relied heavily on agriculture, and had black slaves working predominantly on the land. Without them, people in the South feared for their wealth and economy. The civil war ended in 1865 and although slavery was abolished and slaves were made free men, resentment was still present amongst whites in the South, who largely viewed blacks as ill educated with low morals and hardly human at all.

Don't use plagiarized sources. Get your custom essay on
“ To kill a Mockingbird: Historical Background ”
Get custom paper
NEW! smart matching with writer

These views still exist although it is less apparent than in the previous eras. Racism is a potent theme around which both novels revolve. “To Kill a Mockingbird” is set in a small town in Alabama called Maycomb in the Southern States of America. Although it is fictitious, it is based on Harper Lee’s home town in Monroeville.

The story is narrated by Scout and is about one man, a lawyer, trying to jolt his society out of this isolationist mentality and towards recognising that Blacks are humans, who deserve equal opportunities as Whites as he defends an innocent black man, charged with the rape of a white girl. “Roll of Thunder, Hear My Cry” is also set in 1933 in the Southern State of Mississippi. Here the black children of the Logan family, especially Cassie who is the narrator, are growing up during the hard times in a state where the black community is already subject to extreme racist attitudes.

In the course of the story we see how Cassie begins to reach a painful understanding as she witnesses the hatred and destruction around her and learns when it is important to fight for a principle, even if it brings terrible hardships. Racial prejudice is arguably the most prominent theme of both novels. In “To Kill a Mockingbird”, several examples of this are demonstrated. Aunt Alexandra and Atticus argue over Calpurnia’s position in the Finch home, and to some extent, it is suggested that Alexandra feels threatened and jealous of Cal, because she has more power over the children and is closer to the family than Alexandra herself.

However, there is also an implication that Aunt Alexandra is racist towards Cal, a black, when she says: “… we don’t need her now” She feels that their reputation will be affected if they associate with her, thus advising Atticus to let her go. Aunt Alexandra and Atticus have fundamentally different attitudes to servant supervision as she still holds onto traditional views, believing that whites are superior to the untrustworthy blacks. Consequently, she feels Cal is not ‘good enough’ to be a part of the Finch family.

Later on, Aunt Alexandra is entertaining the Maycomb Missionary Society at the Finch home and they are debating the harshness of the ‘squalid lives of the Mrunas’ led by Mrs Meriweather. There is irony in the ladies’ conversation in that there are blacks in their own society living in similar conditions. Harper Lee brings this to the reader’s attention by Mrs Merriweather’s use of alliteration in ‘sin and squalor’ which is then repeated for effect. This again shows social prejudice on blacks because the ‘s’ is harsh sounding which suggests that the blacks have low morals which the whites think are not even worth knowing of.

The Ewells who are despised by the Maycomb community as ‘white trash’ are poor, uneducated, crude and dirty and would most keenly feel the threat of the Blacks. They are uncertain of their position in society, thus they assert prejudice on Blacks to make themselves feel more superior. Due to their fear of racial disturbance, they want to get rid of the Blacks, so they choose Tom Robinson to be charged with rape, a crime he does not commit. During the trial, Tom says he feels sorry for Mayella. Mr Gilmer, Mayella’s defendant, picks up on the point and states hastily:

‘you feel sorry for her, you feel sorry for her? ‘ For a Black to feel sorry for a White is the same as a black showing superiority towards whites and therefore would be seen as a crime worse than rape itself in the White jury’s eyes. From this, we see how whites are allowed to assert prejudice over blacks but for blacks to show the slightest hint of discontent or even sincerity is forbidden. “Roll of Thunder, Hear My Cry” is also set against a background of racial hatred which permeates the lives of all. However, racism in society is often shown through violence.

Cassie experiences some hard times at Strawberry herself when Big Ma decides to allow Stacey and Cassie to accompany her to this festival. It turns out to be a day of disappointments and humiliation, starting with the town itself which does not live up to her expectations. Then Cassie is confused by Big Ma’s choice of pitch at the far and least accessible end of the market. Big Ma explains to her that the best positions are reserved for ‘them’s white folks’ wagons’. We see from this that whites feel they are more superior and therefore are prejudiced against blacks, who according to them are of a lower class and do not deserve much.

After the sale, Cassie accompanies T. J and Stacey to the store against Big Ma’s orders. Cassie is appalled to find that the storekeeper, Mr Barnett, serves the white customers even a white girl who was no bigger than she was before them. Cassie is determined to wreak revenge by tackling Mr Barnett about this. She feels it is unfair to be prejudiced against someone simply because of their race and colour. Cassie has been brought up to try and change what little she can, to do something to fight back against injustice.

It will not prevent such things from happening again but at least she is not accepting the treatment she has received. When Cassie touches Mr Barnett, his response is one that is unacceptable: ‘he recoiled as if I had struck him’ It is as if he is physically repelled by her presence. The reader acknowledges that this is due to his racist attitudes. This act to try and seek revenge shows Cassie as a courageous character for she has the guts to stand up for her beliefs, to fight for justice. Mr Barnett becomes angry and shouts at Cassie: ‘whose little nigger is this! ‘ He speaks in total contempt, taking no account of her age.

The word ‘nigger’ is used, a rude and offensive term for Blacks, suggesting that he will not countenance any suggestion of equality for them. Stacey is equally angry, but has to drag Cassie out of the store to prevent her from getting hurt. The final straw comes for Cassie when she bumps into Lillian Jean Simms, who holds strong prejudices against Blacks. Lillian Jean orders Cassie to apologise, but expects her to get down on the road and do so. Mr Simms shortly arrives and the scene becomes ugly and dangerous. He snaps at Cassie saying: ‘when my gal Lillian Jean says for you to get yo’self off the sidewalk, you get, you hear?

‘ Here, Lillian Jean demonstrates the blind prejudice of her father. Big Ma comes along and senses the threatening nature of the situation. Mildred Taylor makes this known to the readers through the ‘fear in her eyes’. She reluctantly commands Cassie to apologise again. Although Big Ma is equally furious, she has enough courage to hold back her feelings and avoid retaliation. By doing so she might have prevented a potentially dangerous fight. Mr Simms however is not satisfied and requests Cassie to address her daughter as ‘Miz’. This shows how Mr Simms uses prejudice to fulfil his need for superiority.

Mama supports this when she explains to Cassie that Mr Simms acts that way for he thinks Lillian Jean is better than her, solely because she’s white. Mama then goes on to say: ‘he’s one of those people who has to believe that white people are better than black people to make them feel big. ‘ We learn of the importance of superiority to the whites and perhaps it is the reason behind some racist attitudes. After all these incidents, we learn that both Stacey and Big Ma have to humble themselves in front of a White person and Cassie is compelled to do the same in fear of getting hurt.

To kill a Mockingbird: Historical Background. (2020, Jun 02). Retrieved from https://studymoose.com/to-kill-a-mockingbird-historical-background-essay 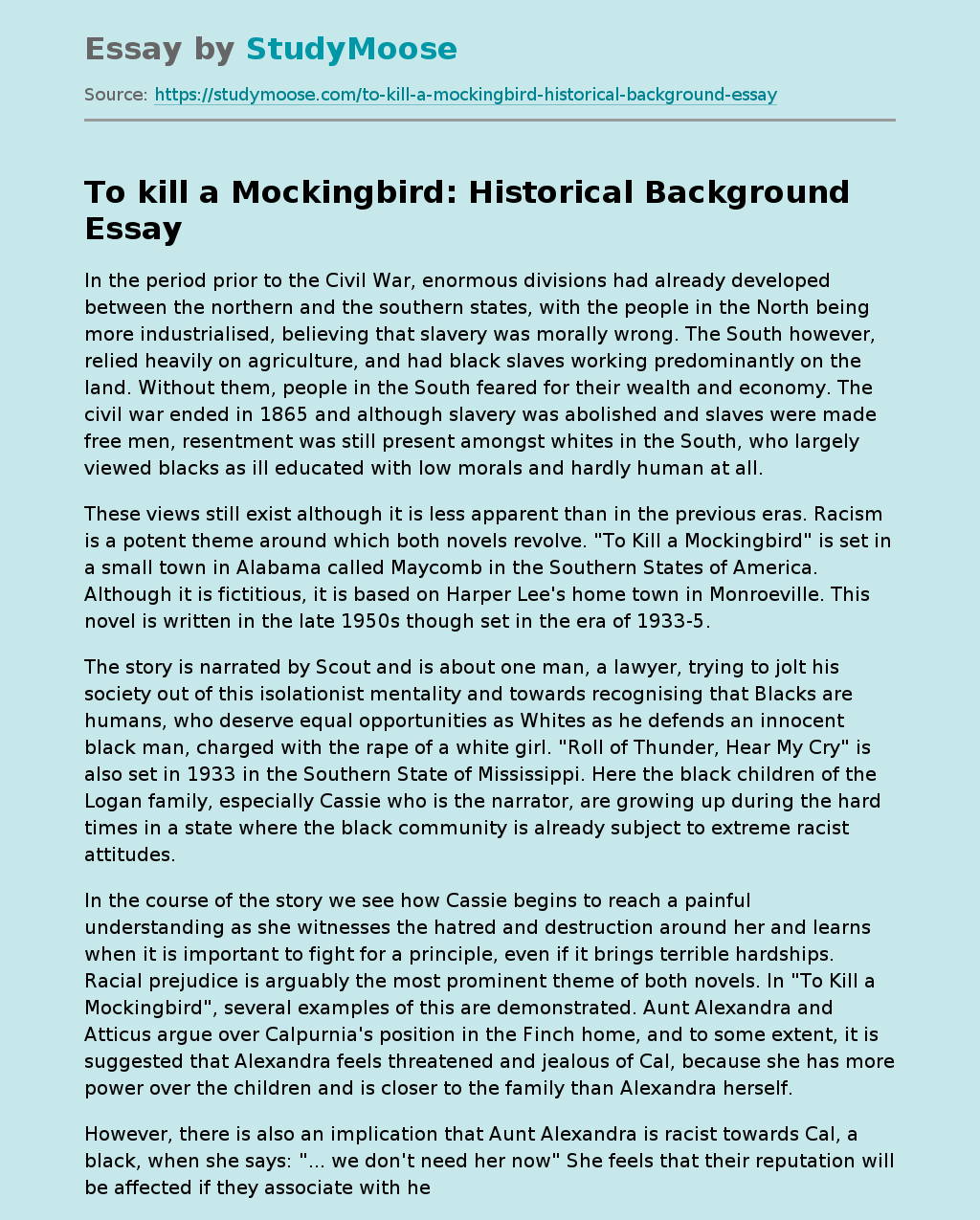