To kill a mockingbird: differences between film and novel

To Kill a Mockingbird: The Differences Between The Movie and The Book “You never really understand a person until you consider things from his point of view… until you climb into his skin and walk around in it. ” (Harper Lee, To Kill a Mockingbird). This quote defines one of the most important messages in the book, concerning power and prejudice. I think that this quote could be used to describe many situations throughout the book.

In my essay I will show examples of the key events throughout the book that have been omitted or altered from the movie “To Kill a Mockingbird” and how they contribute to the degradation of the critical messages in the book.

Don't use plagiarized sources. Get your custom essay on
“ To kill a mockingbird: differences between film and novel ”
Get custom paper
NEW! smart matching with writer

When “To Kill a Mockingbird” was made into a movie, the director modified the storyline to what he thought would be most interesting to an audience. The result of this was, that some scenes were altered, omitted and some were added. The theme of the book was slightly changed in the movie.

The first noteworthy modifications are the scenes, which are omitted.

The scene where Calpurnia takes the children to the black church is the first scene I noticed that had been taken out. The children are treated kindly, except for when Calpurnia is harassed by another churchgoer for taking white children to a black church. From this experience the children learned more about Calpurnia’s background and where she came from. I think this scene is important because it shows that the amount of racism is equal from both black and white people.

Even though the Finch sibling’s father is famous in the black community there is still racial tension from having white children integrated in the black society.

This event plays a key part in the theme of the novel, which is power and prejudice. I think the director had to take this scene out because there are so many events from the book that he has to fit into the movie, that there wasn’t enough room, or perhaps he was on a tight timeline to write the storyline and omitted it. The effect this has on the main theme of power and prejudice is that the audience cannot gain as much insight as the book provided. Another scene that was taken out of the movie, which I thought was very important was the scene where Jem goes to Mrs. Dubose’s house everyday after school for a month to read to her.

This was a consequence of Jem cutting down all the flowers in her backyard. I think this scene is important because it is a demonstration of courage. Jem realises by going to Mrs. Dubose’s house everyday that there is more to her than her just being a mean old lady. When she dies he finds out that she was actually a morphine addict and that she coped with her pain by being horrible to everybody. I think that the director omitted this scene because it strays too far from the movie’s overall theme of racism. Another factor as to why the director might have removed this scene is that it was perhaps too long, or too difficult to organise.

In the long run I think the director removed this scene from the movie because it would not captivate the audience, and that they would get bored. By omitting this scene the movie doesn’t show Jem’s prejudice against Mrs. Dubose has been overcome. Therefore the effect of removing this scene from the movie is the critical message that people can overcome their prejudice against someone if they get to know them is not adequately demonstrated. The third noteworthy scene in the book was the scene where Jem and Scout went for their first day of school.

In this scene many of the characters that play a role in the maturation of Jem and Scout are mentioned. In this scene we meet Mrs. Caroline, Scout’s teacher. Scout shows her that she can read perfectly and in response to this Mrs. Caroline gets angry, because she believes all the children should know nothing in this grade. She also believes in keeping a smarter student in a lower grade just so she can teach at the same pace as the rest of the class. The critical message shown in this scene was power. Mrs. Caroline had the power to do the right thing, by teaching Scout to read more books, but instead she chooses to do the wrong thing.

She scolds Scout because she is different to all the other children. I believe that this played a key role in the presumption that just because someone is different it gives you a right to scold them, or treat them badly. In my opinion the director removed this scene because it deviates from the central theme of the movie. The effect omitting this scene has on the central theme of power and prejudice is that it doesn’t show the power some teacher’s use against smart children, who live in impoverished conditions. In the movie many characters were taken out altogether, or are less involved than portrayed in the book.

The first character I noticed that was missing was Aunt Alexandria. In the book Aunt Alexandria visits Atticus and the children because as she puts it the children have no motherly influence. Throughout Aunt Alexandria’s visit, she noticed that Scout is quite a tomboy. She tries to make Scout act more lady-like. I think the reason she is not in the movie was to take away the emphasis on Scout’s maturation. I do not think she is an important character in the book, and I don’t think she adds or takes away from any critical message in the movie.

Another scene that was omitted was outside the courthouse when Atticus was talking to Mr. Dolphus Raymond, and realises that he is not drinking alcohol in the brown paper bag; but is drinking cola. I think the director removed this character because he thought it might have confused the audience. The effect removing this character has on the message of power and prejudice is that the audience is not shown that Mr. Dolphus Raymond would prefer to be stereotyped as an alcoholic married to a black woman, than explaining his actions to the public.

This shows that would rather be prejudiced than explain his feelings. Another character that was removed was Uncle Jack. He plays a small role in the book so I don’t think it has affected the critical message of the novel. The last character that is altered is Mayella Ewell. In the book we are meant to feel sorry for her, as she is raped and beaten by her father, never kissed a man, and is poor. She accuses Tom Robinson of raping her because of her father’s actions. However, through all of this she still plants flowers in her shack to try and boost her confidence, and give her some hope.

I think the director interpreted her differently so that the audience didn’t see the softer, more emotional side of Mayella. I strongly feel that Mayella should have been portrayed differently because it changes the perspective, through which you see her. Altering Mayella doesn’t really have an effect of the theme power and prejudice, I just think she is unfairly treated by her portrayal as heartless. Ultimately, I believe by excluding certain scenes and altering characters in the movie, it results in defeating the purpose of the book, which is educating the reader on the critical messages concerning power and prejudice.

I think that the main injustice in the movie was omitting the church scene, the school scene, the courthouse scene and the alteration of portraying Mayella Ewell as heartless. There are still many similarities between the book and the movie, however most movies adapted from a book will struggle to give the viewer the same insight as the author intended. Bibliography 1. Smith, T. (2006). ‘To Kill A Mockingbird”- Differences between Movie and Book: Movie Film comparison compare contrast. Free Essays, Term Papers, Research Paper, and Book Report. Retrieved April 29, 2011, from http://www. 123helpme. com/view. asp?

To kill a mockingbird: differences between film and novel. (2016, Jul 22). Retrieved from http://studymoose.com/to-kill-a-mockingbird-differences-between-film-and-novel-essay 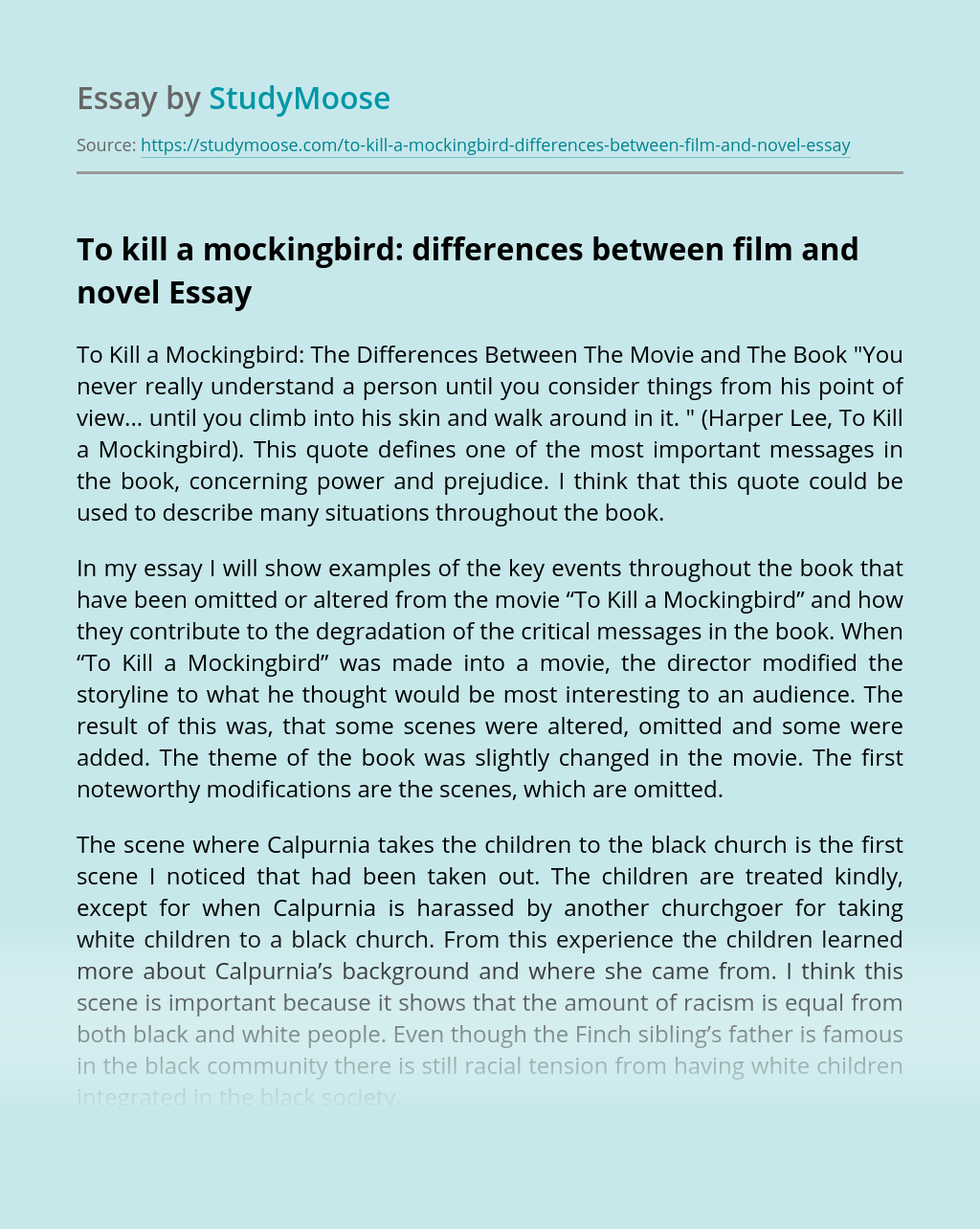