The Relationship Between Atticus and Scout in To Kill a Mockingbird

The relationship between a father and a daughter is something that has been cherished throughout the ages. Each plays a large role in the development and growth of in each others lives and personalities. The same is true for the relationship between Atticus and Scout in the novel To Kill a Mocking Bird. The stereotypical father to a daughter is usually large, protective, and very kind. Atticus, however, does not fit the stereotype. He is kind, but unlike most fathers, he is tall and skinny, and just tends to read all day.

Don't use plagiarized sources. Get your custom essay on
“ The Relationship Between Atticus and Scout in To Kill a Mockingbird ”
Get custom paper
NEW! smart matching with writer

Atticus does not fill the stereotype; however he is a father that parents his daughter with values and tolerance. He does play a role of father figure, but Atticus seems to be less of a father and more of a teacher in Scouts life. The way he instructs her about life, and about how to deal with people, it seems Atticus is attempting to be a teacher to Scout.

Atticus represents morality and reason in To Kill a Mockingbird. As a character, Atticus is even-handed throughout the story. He is one of the very few characters who never has to rethink his position on an issue.

His parenting style is quite unique in that he treats his children as adults, honestly answering any question they have. He uses all these instances as an opportunity to pass his values on to Scout and Jem. Scout says that “‘Do you really think so?’ . . . was Atticus’ dangerous question” because he delighted in helping people see a situation in a new light.

Atticus uses this approach not only with his children, but with all of Maycomb. And yet, for all of his mature treatment of Jem and Scout, he patiently recognizes that they are children and that they will make childish mistakes and assumptions. Ironically, Atticus’ one insecurity seems to be in the child-rearing department, and he often defends his ideas about raising children to those more experienced and more traditional.

The Relationship Between Atticus and Scout in To Kill a Mockingbird. (2016, Apr 03). Retrieved from https://studymoose.com/the-relationship-between-atticus-and-scout-in-to-kill-a-mockingbird-essay 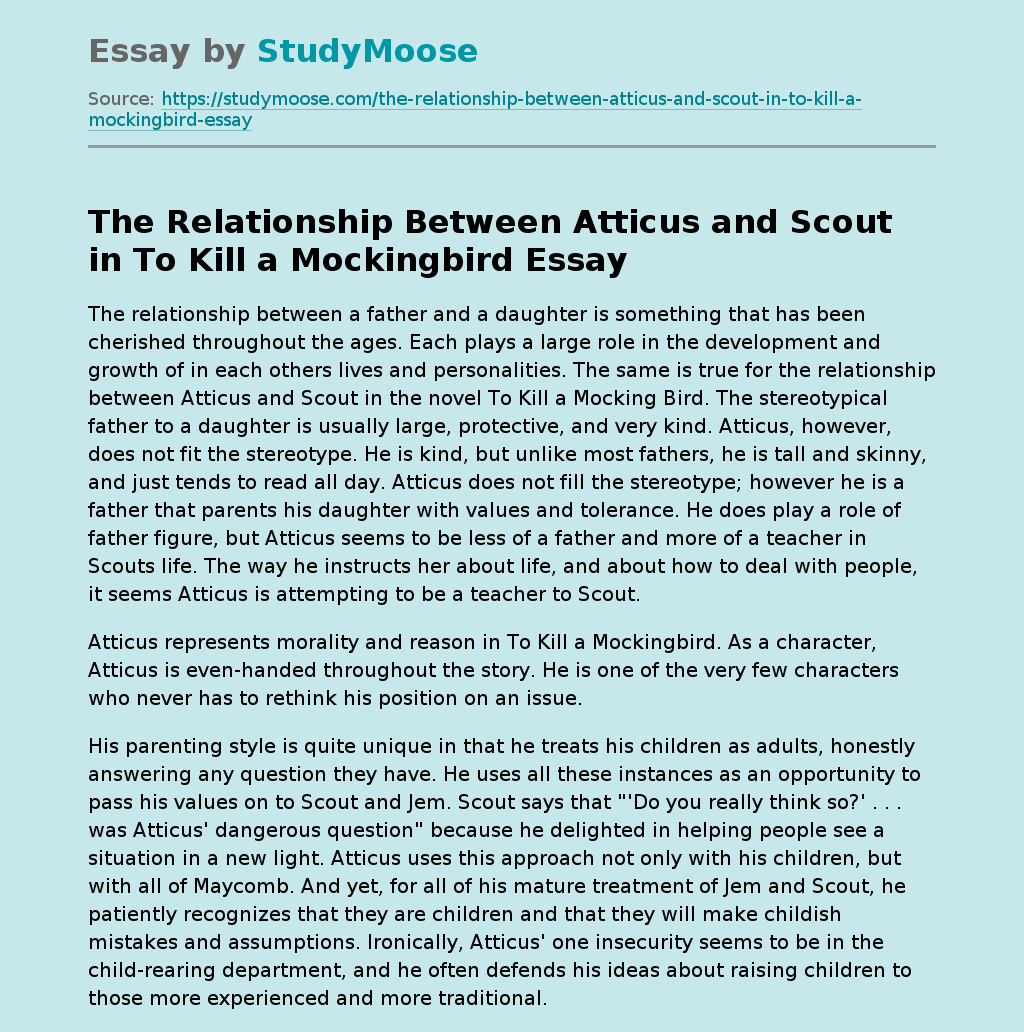