How does Atticus Finch show good parenting in To Kill a Mockingbird?

In a small Christian town in the South during the 1930s, the struggles of parenting during the Great Depression just add to the difficulties of instilling morals into children. An abundance of parents in the town of Maycomb in Harper Lee’s To Kill A Mockingbird fall into the category of “inherently racist and discriminatory,” and judge Atticus and his children for his decision to defend a black man in court. It would be extremely difficult to raise children in this town, but Atticus does an excellent job teaching his children not to give into the discriminatory, judging ways of others in the town.

Don't use plagiarized sources. Get your custom essay on
“ How does Atticus Finch show good parenting in To Kill a Mockingbird? ”
Get custom paper
NEW! smart matching with writer

Atticus’ refusal to give in to the ways of other parents and his persistence in teaching his children to be the most respectful people that they can be, prove that he is a quality parent. While many other parents in the town judge his parenting, he continues to teach his children life lessons in unique ways.

In a town where people are judged and ridiculed for anything, especially for not fitting into society or being black, Atticus’ lessons to his children, teaching them to not judge others, truly stand out.

After Bob Ewell spits in his face, Atticus tells his son, “Jem, see if you can stand in Bob Ewell’s shoes a minute” (Lee 116). Even though Atticus fought against Bob Ewell in court, he still wants to have his children try to see things from his perspective. Atticus wanted to teach his children how to empathize, and in this moment, he could have easily been biased but chose not to be, for the sake of good parenting.

Atticus teaches his children to consider things from another person’s viewpoint in order to get along with others, which is a unique thing to teach a child in Maycomb at this town because the people in this town are extremely judgemental and have a lot of disagreements. “First of all,” [Atticus] said, “if you can learn a simple trick, Scout, you’ll get along a lot better with all kinds of folks. You never really understand a person until you consider things from his point of view […] -until you climb into his skin and walk around in it” (Lee 16). This sentence is a paragon of empathy and objectiveness, and Atticus’ dedication to teaching this lesson in order to ensure that his children do not grow up to be judgemental is a part of his exemplary parenting..

Another lesson that Atticus teaches his children is to respect others, no matter what. This lesson is most evident when Atticus tells his children about Mrs. Dubose, who is extremely disrespectful to him. After her death, Atticus said to his children, “She had her own views about things, a lot different from mine, maybe son, I told you that if you hadn’t lost your head I’d have made you go read to her. I wanted you to see something about her’ I wanted you to see what real courage is, instead of getting the idea that courage is a man with a gun in his hand. It’s when you know you’re licked before you begin but you begin anyway and you see it through no matter what. You rarely win, but sometimes you do. Mrs. Dubose won all ninety-eight pounds of her. According to her views, she died beholden to nothing and nobody. She was the bravest person I ever knew” (Lee 61). Many parents in Maycomb at the time would teach their children anger and hate towards someone that were rude to them, but Atticus wanted his children to be respectful and let his children consider all sides of a story. Furthermore, when Atticus found out that his children were mocking their neighbor Boo Radley by playing a game about his life, he made sure that they stopped it immediately and lectured them for being disrespectful. “Son,” he said to Jem, “I’m going to tell you something and tell you one time: stop tormenting that man. That goes for the other two of you” (Lee 26). Scout contemplated the lesson and thought to herself, “What Mr. Radley did was his own business. If he wanted to come out, he would. If he wanted to stay inside his own house he had the right to stay inside free from the attentions of inquisitive children, which was a mild term for the likes of us. How would we like it if Atticus barged in on us without knocking, when we were in our rooms at night? We were, in effect, doing the same thing to Mr. Radley. What Mr. Radley did might seem peculiar to us, but it did not seem peculiar to him. Furthermore, had it never occurred to us that the civil way to communicate with another being was by the front door instead of a side window? Lastly, we were to stay away from that house until we were invited there, we were not to play an asinine game he had seen us playing or make fun of anybody on this street or in this town” (Lee 26). Atticus made sure that his children were not disrespecting Boo Radley. To the kids he was mysterious and strange. When Atticus found out, however, that Jem and Scout were mocking him and playing games about him, he made sure that they wouldn’t do it again and that they respected him nonetheless.

Some may argue that Atticus was not responsible enough when taking care of his children. Parts of the book may show his leniency towards what he allows his children to do and an attitude that may be perceived as nonchalant, such as when “Atticus said as tactfully as he could that he just didn’t think he could stand a pageant tonight, he was all in. He had been in Montgomery for a week and had come home late that afternoon. He thought Jem might escort [Scout] if [she] asked him” (Lee 134). However, Maycomb is a small town and it is okay for Jem and Scout to walk around together because there are neighbors watching out for them. He has taught them to be responsible and it is a learning experience for them. “Atticus liked Maycomb, he was Maycomb County born and bred; he knew his people, they knew him, and because of Simon Finch’s industry, Atticus was related by blood or marriage to nearly every family in the town” (Lee 3). Almost everyone in the town knew Scout and Jem, and so it was not irresponsible for Atticus to choose a parenting style that allowed them more freedom. When taken out of context, quotes from Lee’s To Kill a Mockingbird may support a person’s claim that Atticus was irresponsible, but these claims are based on a disproportionate scale to the time period, location and circumstances. His parenting may not have worked in a large, unsafe city during the present day and under different circumstances, but it is clear that throughout the book, he consistently showed excellent parenting skills when all factors are considered.

How does Atticus Finch show good parenting in To Kill a Mockingbird?. (2019, Nov 14). Retrieved from https://studymoose.com/how-does-atticus-finch-show-good-parenting-in-to-kill-a-mockingbird-essay 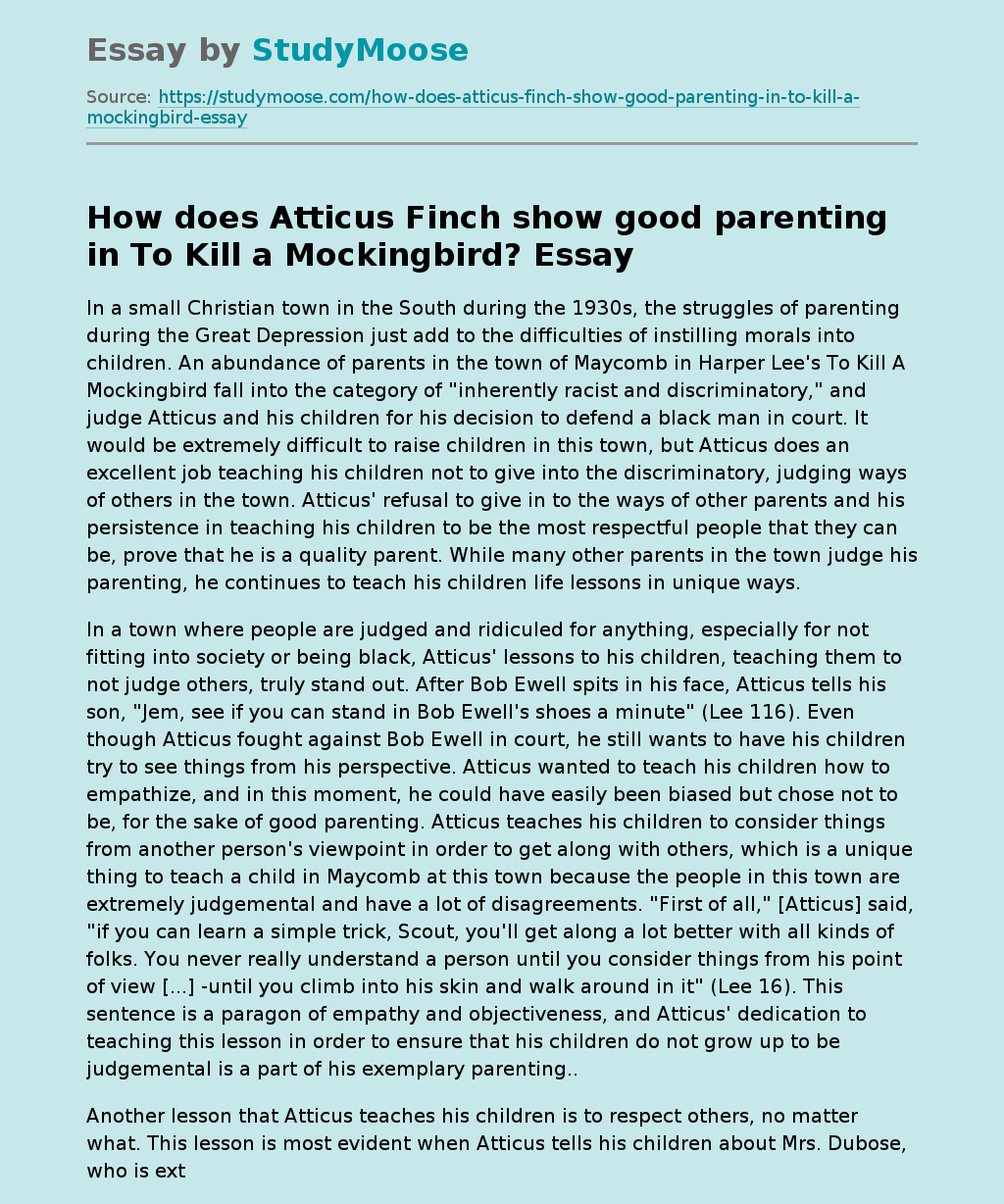