Atticus Finch as a Moral Character

Throughout literature, there are numerous examples of characters who serve to reinforce moral values of both other characters, and the reader. These characters consistently choose to do the “right” thing in the face of severe adversity. For example, in the Parable of the Good Samaritan, the Samaritan man goes against all societal values to help the Jew after he had been left for dead by muggers. In To Kill a Mockingbird by Harper Lee, Atticus Finch serves as a shining beacon of morality in the face of the prejudice-ridden early 20th century Alabama.

Don't use plagiarized sources. Get your custom essay on
“ Atticus Finch as a Moral Character ”
Get custom paper
NEW! smart matching with writer

Atticus helps to develop healthy and moral attitudes in his children by encouraging them to avoid unnecessary conflict, to always strive to be the better person, but also to still be prepared to accept a challenge if it is necessary for doing what is morally right, which demonstrates his truly moral character.

This is specifically demonstrated by Atticus Finch after Bob Ewell spits in his face. Atticus displays extreme restraint by refusing to fight Ewell. When asked to comment on the incident, he simply remarks, “I wish Bob Ewell wouldn’t chew tobacco” (Lee 291). In this case, Atticus demonstrates that he is perfectly willing to swallow his pride and do what is right. Secondly, Atticus further expands on this attitude by teaching his children that it is wrong to fight with neighbours, no matter what insults are said to them.

After Mrs. Dubose tries to antagonize Jem, Atticus advises: “…hold your head up high and be a gentleman. It’s your job to not let her make you mad” (Lee 133). On this occasion, Atticus is teaching his children the old proverb of “sticks and stones” – that people should learn to ignore things that others say about them. By being peaceful and restrained towards Bob Ewell, and requiring his children to do the same to Mrs. Dubose, Atticus is teaching his children how to avoid conflict and handle situations properly, which is a critical element of acting morally.

It is often difficult to travel on moral high ground, especially when there is pressure not to, but experience teaches us that it is always the best option. In To Kill a Mockingbird, Atticus provides a clear example of how to be the better person when forced into an uncomfortable situation.

After Jem destroys Mrs. Dubose’s garden, Atticus has to teach his children that people are not always going to be kind to them, especially with Atticus’ role in the Tom Robinson case, but they must still treat everybody with respect. Atticus tells Scout, “It’s not fair for you and Jem, I know that, but sometimes we have to make the best of things” (Lee 139). In this example, Atticus is teaching his children that no matter what happens, always try to be positive about it, and never to let their detractors bother them. Additionally, Atticus does not condone his children fighting.

Once again, Atticus knows that there are always going to be people that are unkind to them, but that fighting will not make the situation any better. Scout mentions, “Atticus had promised me he would wear me out if he ever heard of me fighting anymore; I was far too old and big for such childish things, and the sooner I learned to hold in, the better off everybody would be” (Lee 99). In this instance, Scout remembers that Atticus does not permit her to fight with others because it is immature and damaging, regardless of what caused the fight.

Therefore, Atticus’ attitude towards conflict, to be the better person, demonstrates that he understands how to behave morally when presented with conflict.

Doing the right thing is often significantly tougher than indecision, or even doing the wrong thing. In To Kill a Mockingbird, Atticus Finch proves that doing the right thing might be difficult, but it is always the preferable choice, and that it is never impossible. In 1930s southern Alabama, racist or otherwise prejudiced attitudes are plentiful. This can make morally correct choices difficult. When Atticus Finch took the Tom Robinson case, he knew that the popular opinion of the residents of Maycomb would be against him.

However, he understands that taking the case was the right thing to do, and that he must do it. When Atticus is explaining his decision to take the Tom Robinson case, he states, “This case, Tom Robinson’s case, is something that goes to the essence of a man’s conscience – Scout, I couldn’t go to church and worship God if I didn’t try to help that man” (Lee 139). By saying this, Atticus is acknowledging that although Maycomb may be against him, he knows he has to help Tom Robinson because it is the only way to do what is morally right. Later, Tom Robinson’s life is threatened by a mob who want to break into the jail and murder him.

Atticus is warned of this, and he goes to the jail in order to help Tom. Atticus prevents the mob from reaching Tom, telling them, “You can turn around and go home” (Lee 202). At this time, Atticus understands that he could be attacked and potentially injured, but he knows that he must make the morally correct, albeit challenging choice, and go to the jail to protect Tom.

Based on this evidence, it is clear that Atticus understands that some of the choices that he has to make will be difficult, such as defending Tom Robinson in court, or protecting him from the mob. However, Atticus knows that they are the only morally right choices, and therefore the only choices he may permit himself to make, as he is a strong moral character.

Acting morally does not require perfection, and any person or character will have minor flaws and imperfections. In Harper Lee’s To Kill a Mockingbird, Atticus Finch serves as a near-perfect role mode in contrast to the chaotic environment of 1930’s Alabama. His desire to avoid inane conflict, always strive to be the better person, and accept challenges in the process of doing what is right demonstrate his true sense of righteousness, and call us to act as better people in the face of adversity. If adopted by everyone, Atticus’ actions, attitudes and principles would make the world a much more pleasant place to live in.

Atticus Finch as a Moral Character. (2016, Apr 26). Retrieved from https://studymoose.com/atticus-finch-as-a-moral-character-essay 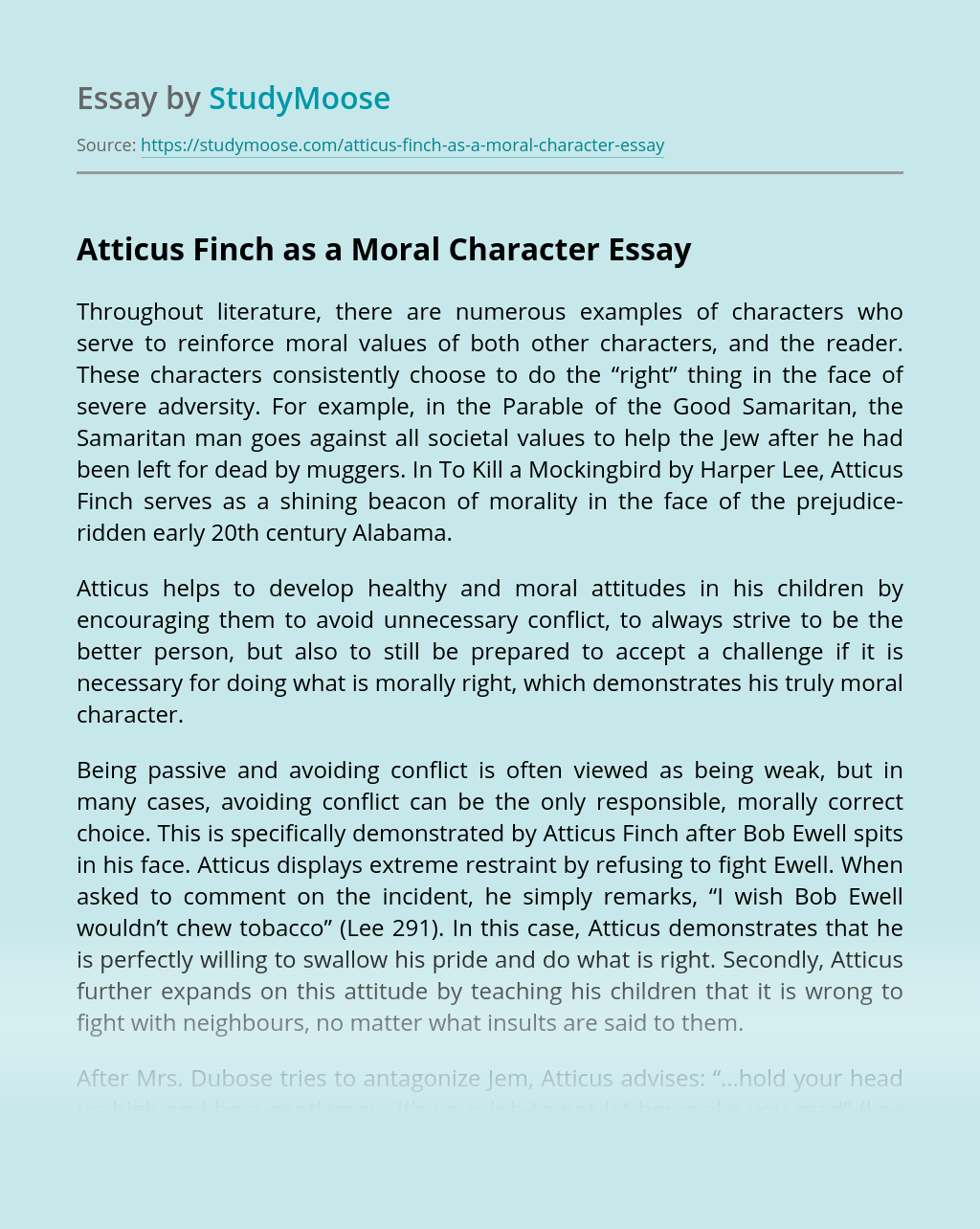