Characters that influence scout in to kill a Mockingbird

Don't use plagiarized sources. Get your custom essay on
“ Characters that influence scout in to kill a Mockingbird ”
Get custom paper
NEW! smart matching with writer

Jem, Atticus and Calpurnia have the strongest influence on Scout’s development into the person she is at the end of the novel.

For starters, Calpurnia helps scout become more lady like at the end of the novel by teaching her proper manners and edict. Scout learned cooking and cleaning skills from Calpurnia while Jem was busy growing up and distancing himself from her. “Just come right on in the kitchen when you feel lonesome, we’ll find lots for you to do in here.

” (Lee 154). Another example of Calpurnia teaching Scout proper manners was when she corrects Scout for thinking that she is better than Walter Cunningham. “Yo’ folks might be better than the Cunningham’s, but it don’t count for nothing the way your disgracing them.” (Lee 33). When Calpurnia scolds Scout for thinking she is better than Walter, she is telling her how she was being extremely rude. Calpurnia tells her that it is not acceptable to treat company rudely. Calpurnia helps scout develop into the person she is at the end of the novel by teaching her appropriate lady like actions.

Next, Jem influences Scout throughout the novel by always looking out for her best interests. When Dill first arrives Jem makes the decision that he is an acceptable friend, even when Scout questions this decision. “Jem told me to hush, which is a sure sign that Dill has been studied and found acceptable.” (Lee 9). Towards the end of the novel Jem looks out for Scout by throwing himself in front of her when they got attacked by Bob Ewell. “I felt Jem against me. He was up like lightning and pulling me with him.” (Lee 351). When Jem threw himself in front of Scout he proved that he would risk his own life looking after his sister. He wanted to make sure that Scout would end up okay, so he tried to fight off Bob Ewell in order to protect her and keep her safe. Jem Finch helps shape Scout into the person she is at the end of the novel by always looking out for her best interests.

Finally, Atticus Finch has a major influence of Scouts Developments into the person she becomes at the end of the novel because of the valuable life lessons he teaches her growing up. Atticus teaches Scout the importance of education by making a compromise that they will continue to read at home every night, as long as she is attending school during the day. “if you’ll concede the necessity of going to school, we’ll go on reading every night as we have been.” (Lee 41). Atticus also teaches Scout not to treat people differently just because they look

strange or act weird. In the novel Atticus is referring to Boo Radley when he says “You never really understand a person until you’ve climbed into their skin and walked around in it.” (Lee 39). Scout does not really understand Boo Radley until the end of the book when he saves her brothers life. She really starts to understand him as she is standing on the Radley’s porch. She then realizes that even though Boo Radley was a bit odd looking, he was not a bad guy, in fact he was actually rather nice. Atticus Finch is a major influence on the person Scout is at the end of the novel because of the lessons he has taught her throughout her childhood.

In conclusion, The 3 characters that had the biggest impact on Scout’s character change towards the end of the novel were Atticus, Jem and Calpurnia. First, Jem always looks out for her. Second, Calpurnia has taught her how to act like a proper lady. Finally Atticus has taught her valuable life lessons. In To Kill a Mockingbird, Harper Lee has displayed that everyone’s surroundings influence their character, personality and ultimately the person they become.

Characters that influence scout in to kill a Mockingbird. (2016, May 15). Retrieved from https://studymoose.com/characters-that-influence-scout-in-to-kill-a-mockingbird-essay 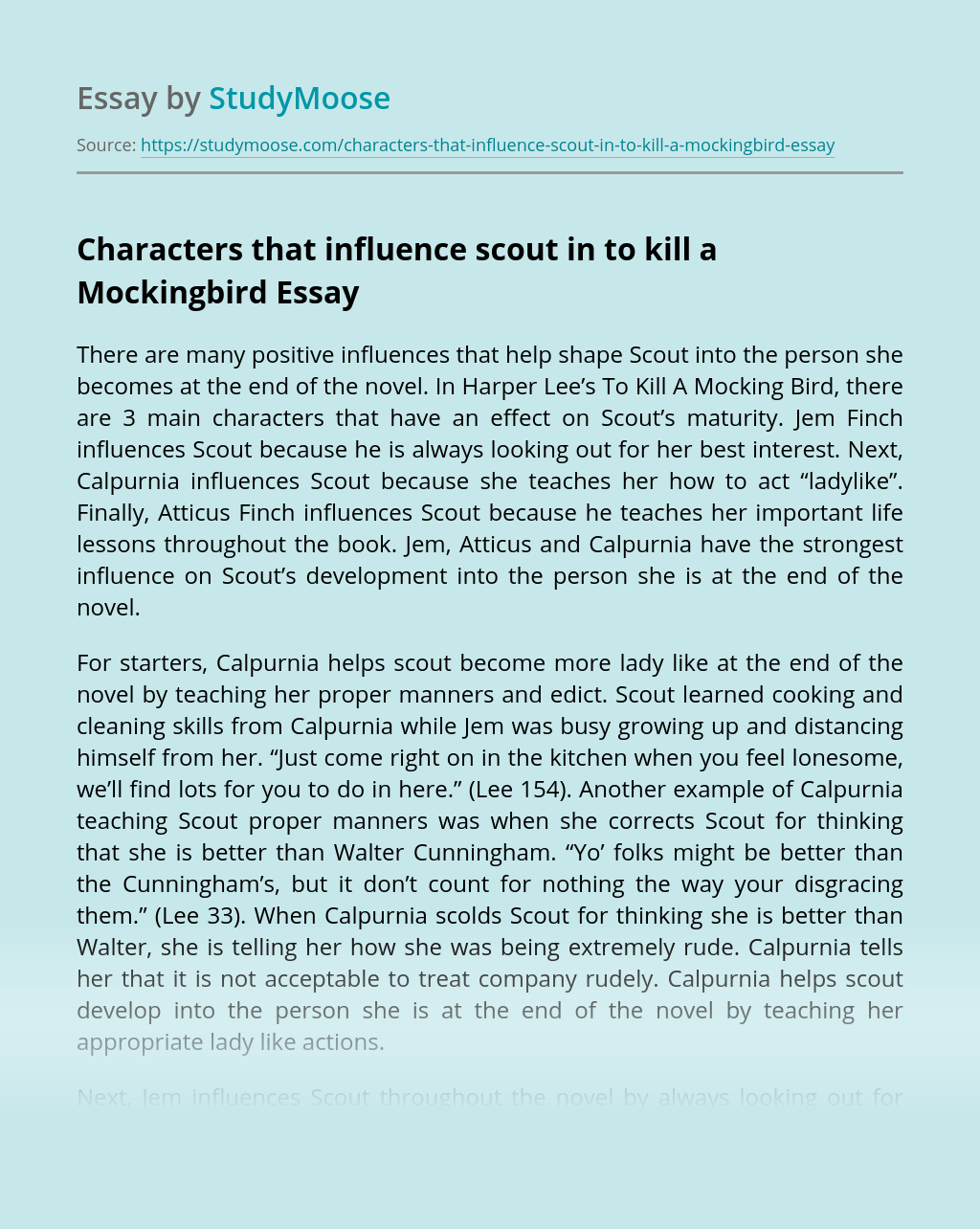