To Kill a Mockingbird Film Review

To Kill a Mockingbrid Department of History History 314 April 14, 2012, 2012 One of the most important themes in To Kill a Mockingbird is the existence of social inequality, as well as whether people are essentially good or evil. Throughout out the movie we watch the transformation of Jem and Scout, two of the main characters who are children, from a view of childhood innocence where they assume everyone is good because they had never experienced evil. The children’s new more adult perspective in which they incorporate their understanding of evil into their view of the world is a very important transition in the movie.

Turn in your highest-quality paper
Get a qualified writer to help you with
“ To Kill a Mockingbird Film Review ”
Get high-quality paper
NEW! AI matching with writer

This transition reveals the threat of hatred, prejudice and ignorance for innocent people. These three qualities are explored through the social inequalities that are prevalent in the movement. To Kill a Mockingbird takes place in Maycomb, Alabama, during the 1930s and is centered on Scout Finch and her Brother Jem. The story covers roughly three years and during this time Jem and Scout go through changes in their lives.

The children begin as innocent and carefree, and spend their time playing with each other while secretly spying on Arthur Radley, also called “Boo”.

The father of the children is Atticus Finch, he is a town lawyer who is idealistic and believes that people should be treated fairly and to stand up for what you believe in. Finch is given a case in which an innocent black man, Tom Robinson, has been accused of rape and is found guilty even though there is evidence that he was innocent.

One of Finches main argument’s is that Robinson has a crippled left, and the assailant would have had to use his left arm extensively to go through with the crime. Another powerful argument Finch has is that the victim was not examined by a doctor after the assault, to check for signs of rape.

Finch is well aware of the racial prejudices felt by many in the town and he makes a plea to the Jury to put aside their racial bias and look at the facts. His attempts are in vain when Robinson takes the stand for himself and tells the jury he feels pity for the victim because of her circumstances, because of her father they were the poorest family in the town. Finch allows his children to attend the trial and this is a major event in their lives. Scout and Jem are exposed to the racism and hate that is in their town. The two children mature as a result as they are exposed to the obvious racism felt by the town.

Jem is thoroughly distraught after the case at the obvious failure of the justice system. Soon after the trial Finch find out that Robinson was killed in an attempt to escape from jail. Instantly because of his association with Robinson, Finch is turned into a villain in the eyes of the town people. The towns’ people see Finch as having sided with the criminal who was obviously a bad person because he attempted to escape from jail. After a few months the town dies down a bit but Bob Ewell, the father of the rape victim Mayella Ewell, who in fact was the assailant, has not settled down.

Ewell feels that Finches argument in the trial has made a fool of him and he has vowed revenge. After Jem and Scout go to a Halloween party they are attacked by Ewell who slashes at Scout with a knife but is protected by her costume. There is a fight and Jem is knocked out but then Ewell is overtaken by a shadowy figure who turns out to be Arthur “Boo” Radley. “Boo” overtakes Ewell and kills him as he has taken over a semi guardian angel attitude towards Scout and Jem because they had not taunted him like the other people in the town.

As we have discussed in class the raping of white women by black men has been a fear that white men have shared since the introduction of Africans into the Americas. The fear created by this accusation proved to be incredibly devastating in Tulsa when a young black man was accused of attempting to rape a white woman and the majority of the whites proceeded to riot into the black neighborhoods. The whites turned what had been coined the “black wall street” into nothing more than destroyed buildings that had been owned by blacks.

The complicated social hierarchy of Maycomb represents the social inequalities of American society. There are the Finches who are near the top of the social hierarchy. As with the book “Native Son” the rich have much more compassion than the worse off families. For example it is an ignorant poor farmer who accuses Tom Robinson of raping his daughter and similarly it is the poor whites competing with blacks for jobs that demonstrate the greatest prejudice towards blacks. Contrastingly in “Native Son” there is Mr. Dalton and in “To Kill a Mockingbird” there is Atticus Finch who go out of their way to help out black people.

And they are the ones atop the social hierarchy in their respective fictional realms. Similarly characters like Bob Ewell, the father of the supposed rape victim is near the bottom of the social hierarchy, because he is and unemployed drunk. In his attempts to lift himself up above the black community he represents the dark side of racism: ignorance, poverty and hateful prejudice. As will the other characters Arthur “boo” Radley and Tom Robinson also represent a portion of society. Radley and Robinson both represent innocence that is wrongfully destroyed by evil.

To Kill a Mockingbird Film Review. (2018, May 08). Retrieved from https://studymoose.com/to-kill-a-mockingbird-film-review-essay 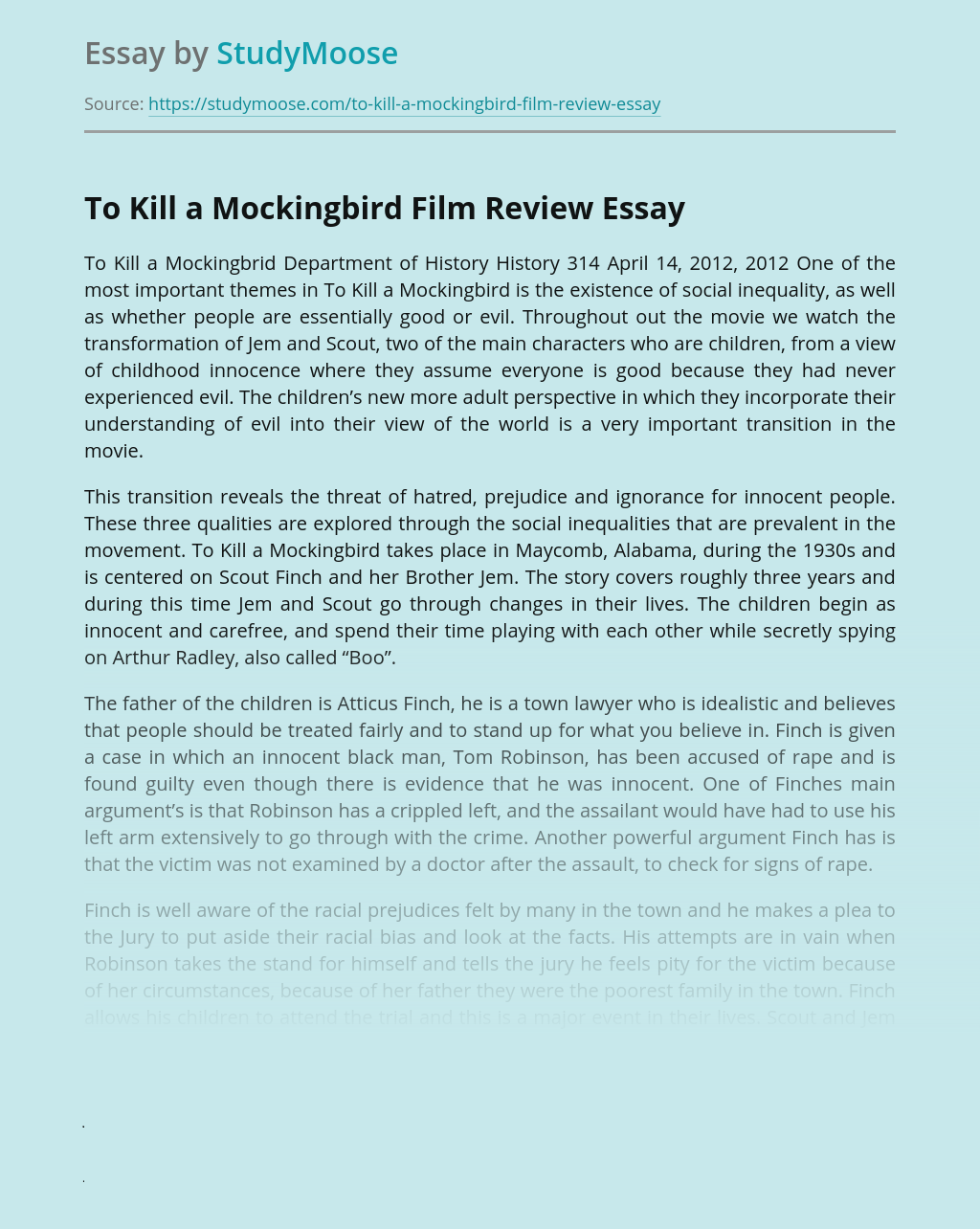 Turn in your highest-quality paper
Get a qualified writer to help you with
“ To Kill a Mockingbird Film Review ”
Get high-quality paper
Helping students since 2015
Stay Safe, Stay Original