Rudyard Kipling’s Kim is not only an adventure story for children, but at the same time is a parable concerning the relationship between the East and the West. There is a suggestion in the novel that the ways of West and the ways of the East are not completely incompatible, and that it is possible to find a meeting point of the two. The very character of Kim is a “mixture o’ things”. He is neither wholly Western nor wholly Eastern, and as a young man Kim is painfully aware of this fact.

Don't use plagiarized sources. Get your custom essay on
“ Rudyard Kipling’s “Kim” ”
Get custom paper
NEW! smart matching with writer

It is his aim to discover his identity, and the quest to this end is how the novel unfolds. As Tagore notes, the West follows the path of mind and activity, while the Eastern path is that of the soul and of submission (261). At the beginning of his quest Kim joins up with one who is truly on the Eastern path to truth, and this is Teshoo Lama, a Buddhist monk from Tibet, in search of “the River of the Arrow”, that which cleanses the soul of impurity.

Kipling is telling us that the paths must necessarily join, and that there is a mutual dependence where one cannot do without the other. It may appear at first sight that Kim is not a pure representative of the West. The orphaned son of an Irish Colonel, Kim is brought up by a prostitute in Lahore, growing up in rank poverty to be streetwise.

Apart from his white skin there appears to be no trace of his Western genealogy, and even his skin is burnt brown by the sun and is almost of native hue. But there is always the question in his mind: “Who is Kim? What is Kim? ” (Kipling 233). It is a question flamed by a recollected enigma that he will discover his life purpose when he meets the “nine hundred first-class devils, whose God was a Red Bull on a green field, [and] would attend to Kim” (Ibid 50). He does indeed represent the Western quest. We know this because every aspect of his quest is related to the mind, and is acquired through activity. When he finally discovers his true calling, in which he is involved in the “Great Game”, it is very much in the arena of politics and espionage.

Even when growing up in Lahore we are told that “what he loved was the game for its own sake – the stealthy prowl through the dark gullies and lanes, the crawl up a water-pipe . . . the headlong flight from housetop to housetop under cover of the hot dark” (Ibid 51). After coming into his own he sheds much of his Indian persona, and then we realize what the persona had meant to him all along. It is the means by which he comes to self discovery. This point of view is further strengthened when we examine the portrayal of other Western characters in the novel.

The military and missionary personnel are portrayed as “uncurried donkeys”, who come to India merely with exploitation in mind and have no association with the native soil (Ibid 237). On the other hand, we are sympathetic towards Colonel Creighton and others at St Xavier’s school, where Kim is sent from the military base to finish his schooling. It is an institution sincerely devoted to spreading education in India, and in this society Kim finally fits in. The implication is that India in vitally necessary to Kim’s self discovery, and on a more general note, it is vital to the Western quest as a whole.

In the same way Teshoo Lama’s quest is hopeless without the Western presence in India. The river he seeks is not a material place, but is rather a destination of the soul. But when he arrives at Lahore in the first stage of his quest, we can only feel pity for the man, who is bereft of the least clue at to how to proceed, and is only equipped with some hazy notions about a material river. The Curator of the Lahore Museum is not at all awed by the holy man from the mountains, and instead proceeds to give him a lecture of Buddhism.

The situation is indeed reversed, and the lama is himself impressed by Western scholarship, and we have the bizarre scene of a Buddhist sage addressing the Curator as “O Fountain of Wisdom” (Ibid 57). He next takes Kim on as his disciple, and immediately becomes dependant on him to get along on the road. Being secluded in the mountains seems to have left him with a childlike naivety. Kim on the other hand, is completely self-assured, streetwise, and mentally alert.

This is because he embodies the Western way of mind and activity, and the lama is desperately dependent on such qualities to survive. The dependence is in fact mutual. Kim’s primary quest is for his own identity and calling, and through his association with the lama he learns to seek inwards rather than outwards, for the answers lie within him. The lama’s quest is an esoteric one, calling for a renunciation of the world. When Kim discovers his calling in espionage, this is also an esoteric activity, hidden from the eyes of the world, and bearing profound significance.

The lama’s aim is to conquer the soul, whereas the aim of the Great Game, that which Kim engages in, is to conquer the world. When he finally discovers himself, “the wheels of his being lock up anew on the world without” (Ibid 18). This is in contrast with the lama, whose self discovery in through merging with the Great Soul, that which lies within. In the symbolic picture, both the East and the West are on diametrically opposed paths, and yet both aim for the ultimate destination.

This is why it is possible for the paths of Kim and the lama to intertwine, and for each to become mutually supportive of each other. In conclusion, we are able to read a profound parable in the novel Kim. The characters of Kim and Teshoo lama are symbolic representations of the West and the East respectively, for each is on a quest for ultimate purpose. The West seeks outwards, while the East inwards. Kipling is telling us that though the paths are diametrically opposed to each other, they are not mutually antagonistic, and in fact each is dependent on the other to succeed. 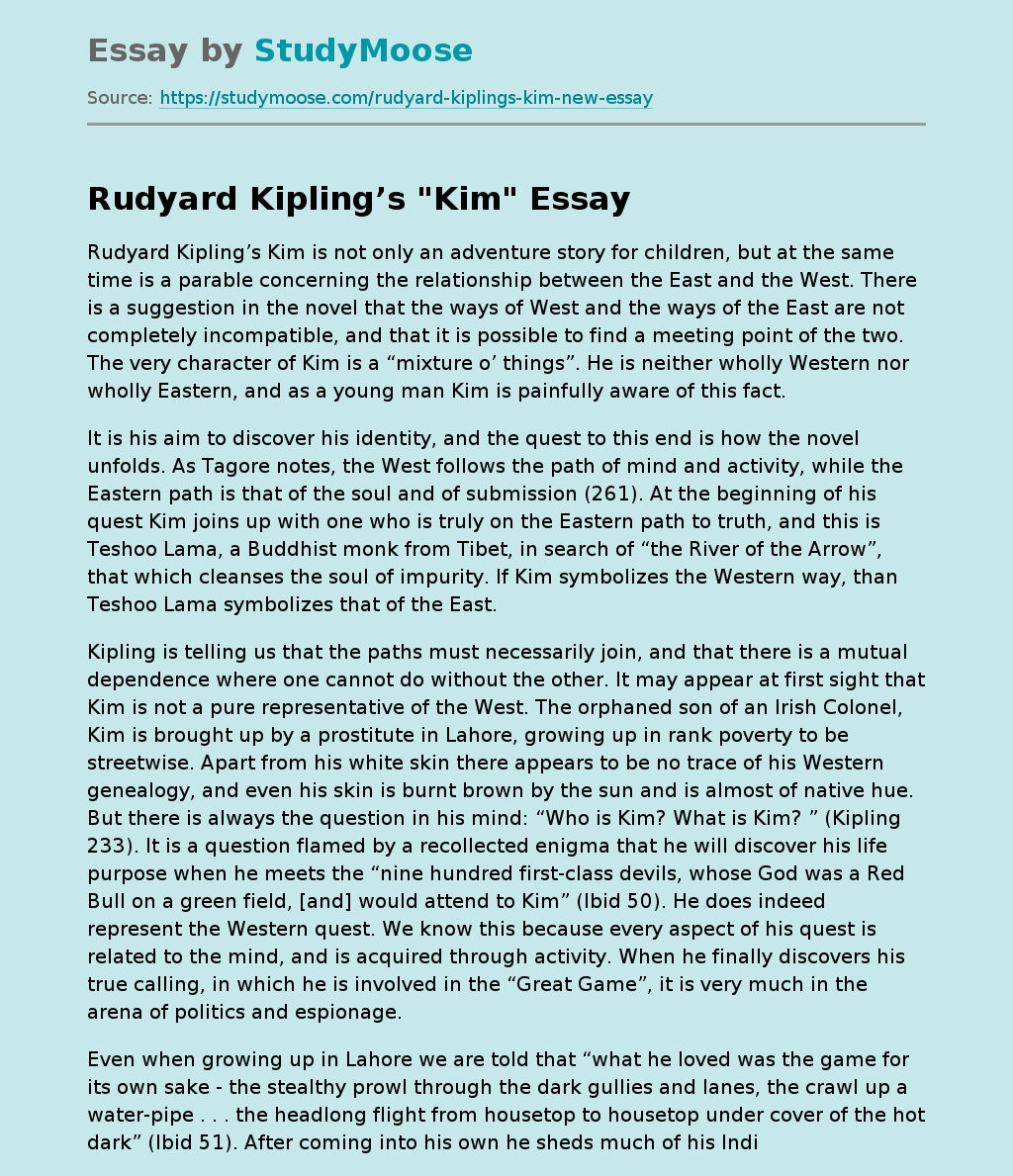