It is easy for someone to lose their morals when encountered with enormous amounts of money. Moral decay is clearly painted in F. Scott Fitzgerald’s The Great Gatsby showing the corruption driven by a green light that is represented as money. Both Jay Gatsby and Tom Buchanan, men of money are mirrored opposites of each other; possessing general similarities in which certain differences are distinguished. For example, both men have money, Gatsby’s means of achieving wealth, though illegal ways that are more justified than Tom’s.

Don't use plagiarized sources. Get your custom essay on
“ The Great Gatsby: Moral Decay ”
Get custom paper
NEW! smart matching with writer

Tom earns money from inheritance, whereas Gatsby constantly works to achieve a social rank acceptable to Daisy’s liking. Both men show off their money. Gatsby throws numerous amounts of parties in an attempt to attract Daisy, whereas Tom brags about his money to impress. Finally, both men share a relationship with Daisy, where Daisy is Gatsby’s number one priority, whereas Tom sets her to the side.

Although Gatsby has justified reasons for attaining wealth, his selflessness leads him to his end whereas Tom’s immoral actions keep him from harm. An example of a character whose morals are destroyed is Myrtle. Myrtle’s attempt to enter into the group to which the Buchanan’s belong is doomed to fail. She enters the affair with Tom, hoping to adopt his way of life and be accepted into his class to escape from her own. Her class is that of the middle class.

Her husband, Wilson, owns a gas station, making a living and trying his best to succeed.

With her involvement in Tom’s class, she only becomes rude and corrupt like the rich. She loses all sense of morality by hurting others in her unsuccessful attempt to join the ranks of Tom’s social class. In doing so, she is leaving behind her husband who loves her. Myrtle believes he is no longer good enough for her. “‘I married him because I thought he was a gentleman.’ She said finally. ‘I thought he knew something about breeding but he wasn’t fit enough to lick my shoe.'” With the hope of being accepted into an upper social class, Myrtle’s morals and old beliefs are gone, being replaced by the false impression that by betraying her loving husband, this new social world will let her in. 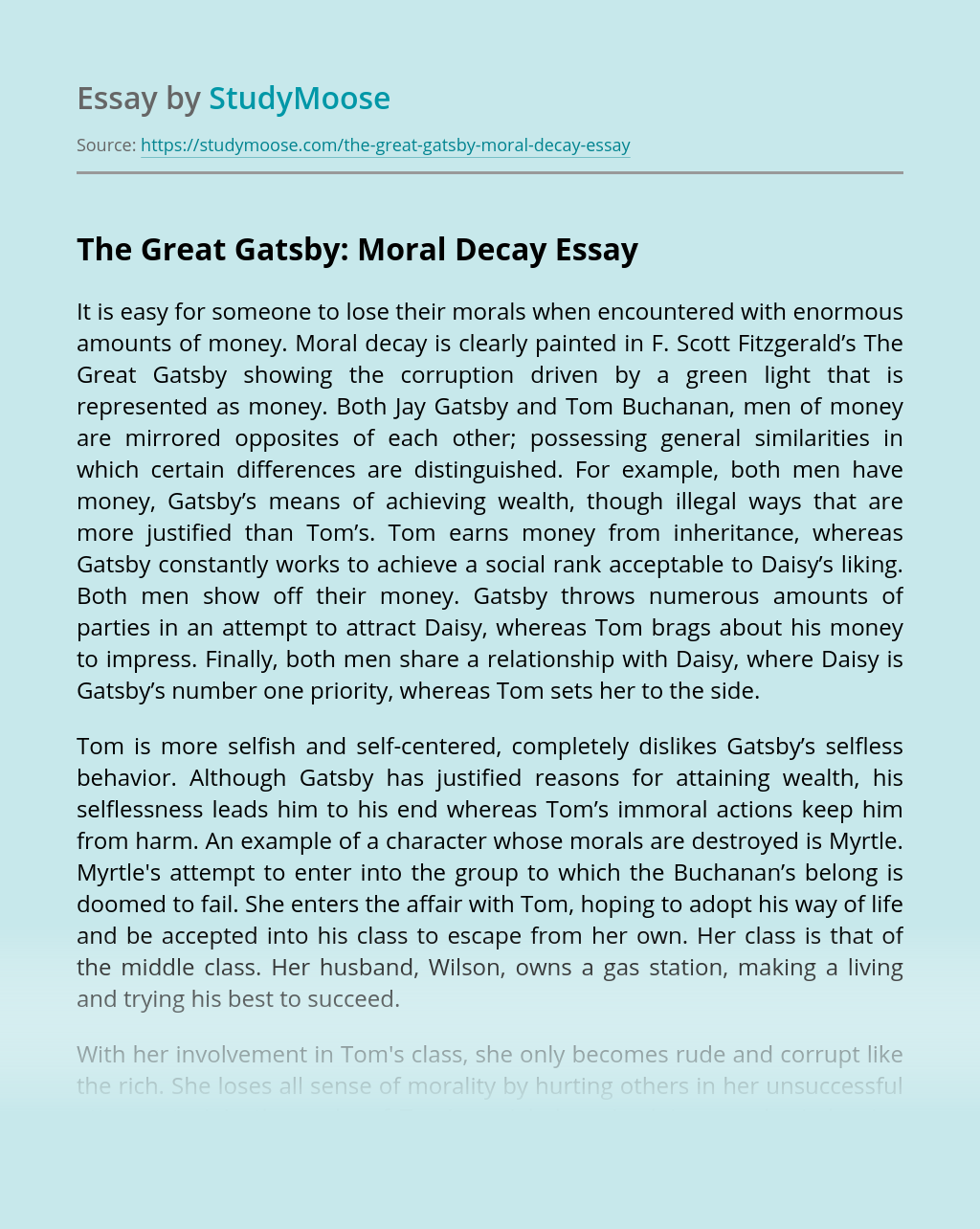