Juno and the Paycock - Deterioration of a Relationship

“Juno and the Paycock” by Sean O’Casey is set amidst the height of the Irish Civil War. Throughout the play, we can see the titular character’s, Juno Boyle and Jack Boyle, relationship deteriorate , and how dramatic events in their lives and the lives of their children, Johnny and Mary, cause the entire family to collapse.

The play is set closely following the signing of the treaty dividing Ireland into sections and features the resulting conflict between the diehards who want a united, free Ireland, and the free-staters, who support the treaty, with this conflict representing the clash of fanatical nationalism and practicality, of idealism and a recognition that what the people truly wanted was peace.

Don't use plagiarized sources. Get your custom essay on
“ Juno and the Paycock – Deterioration of a Relationship ”
Get custom paper
NEW! smart matching with writer

The play also explores some of the relevant ideas of the time, including the poverty of the working class in Dublin in the 1920‘s, and how this poverty affected the communities that lived within the tenements of Dublin at this time.

In the first act we see a great deal of conflict between Juno and Boyle.

The root of this conflict lies in Boyles inability to accept responsibility for supporting his family, as he refuses to seek work and spends his days drinking with his manipulative, scrounging friend Joxer. Juno is forced to act as wife, mother and sole source of income for the family, the prime motivation for this character being to keep her ragged family unit together “Who has kep th’ home together for the past few years – only me” This introduces us very early on to the theme of poverty in the play.

The tension in the relationship is directly linked to poverty throughout the play, Boyle’s lack of responsibility causing conflict between him and Juno when their financial situation is bad. “Your poor wife slavin to keep the bit in your mouth…” We can see O’Casey present both the positive and negative aspects he perceives in poverty. We see him contrast the strength and ability that destitution can invoke through the character of Juno, and the pettiness and selfishness that only serves to further the poverty and drive apart the sense of community that collective poverty can create through the character of Boyle.

However, the converse of this is also true. When, in the second act, the Boyles become apparently more affluent, we can see a greater degree of affection come to the fore of the relationship. The windfall of the will causes Juno to treat Boyle less as a child who must be nagged and scolded to perform any useful, or at least less detrimental, role in the family she holds so dear, and more as the head of his family, a role she previously fulfilled. This change in attitude is regarded by Boyle as him merely him finally getting the respect he believes he deserves. “I’m masther now, an’ I’m goin to remain masther”.

This period of happiness is quickly dispelled when it is revealed that Boyle has deceived the family, allowing them to continue to spend money that he knows they do not have and are never going to get. This demonstrates to us his inability to accept any form of responsibility and signals the end of the period of good luck for the Boyles and the culmination of the intertwining storylines of the play. In the third act the affection that marks Boyle and Juno’s relationship I the second act is dispelled entirely, only to be replaced by bitter conflict and the eventual dissolution of their entire family.

Throughout the play, Juno’s main purpose is to support and hold together her family but in this final act all her efforts are worthless as the actions and attitudes of the other members of her family and those around them drag the family incontrovertibly apart. The first factor in this dissolution is Mary’s pregnancy. This in itself would have a bad effect on the family, with another family member to feed, clothe and house placing further strain on their finances, but it is Johnny and Boyle’s attitude to this pregnancy that does the most damage.

“She should be dhriven from the house she’s brought so much shame upon” Instead of trying to support his daughter through this difficult and emotionally strained situation, he instead seeks to drive her from the house and from the family.

This anger’s Juno, and leads her to threaten Boyle that if Mary leaves the family then Juno will follow her, as he is attempting to destroy that which she holds to be the most valuable thing, her family, purely in order to protect his own reputation However, the final thing that convinces Juno the family is irreparably torn apart is Johnny’s death at the hands of his former comrades.

This cements Juno’s decision to leave, she feel’s justified in leaving with Mary in order to help her raise her child (abortion not being an option at this time in such a heavily catholic country) as she is the only part of her family that is salvageable, with Johnny dead and her convinced that Boyle is beyond salvation. “Let your father furrage for himself now; I’ve done all I could an’ it was all no use – he’ll be hopeless till the end of his days.

”This is the final collapse of the relationship, and we see the final outcome of it. Boyle is left unchanged, as the closing scene of the play showing him sitting drunk with Joxer, oblivious to all the dramatic changes in his life,. Juno, on the other hand, is resolute in her changes, she has finally been given the strength to leave Boyle behind and move on, she is able to recognise him for what he is, not a child, as she appears to view him in act one, because a child has promise of maturing, but as a waster who will never change and will never do anything but hold her back.

Juno and the Paycock - Deterioration of a Relationship. (2016, Sep 16). Retrieved from https://studymoose.com/juno-and-the-paycock-deterioration-of-a-relationship-essay 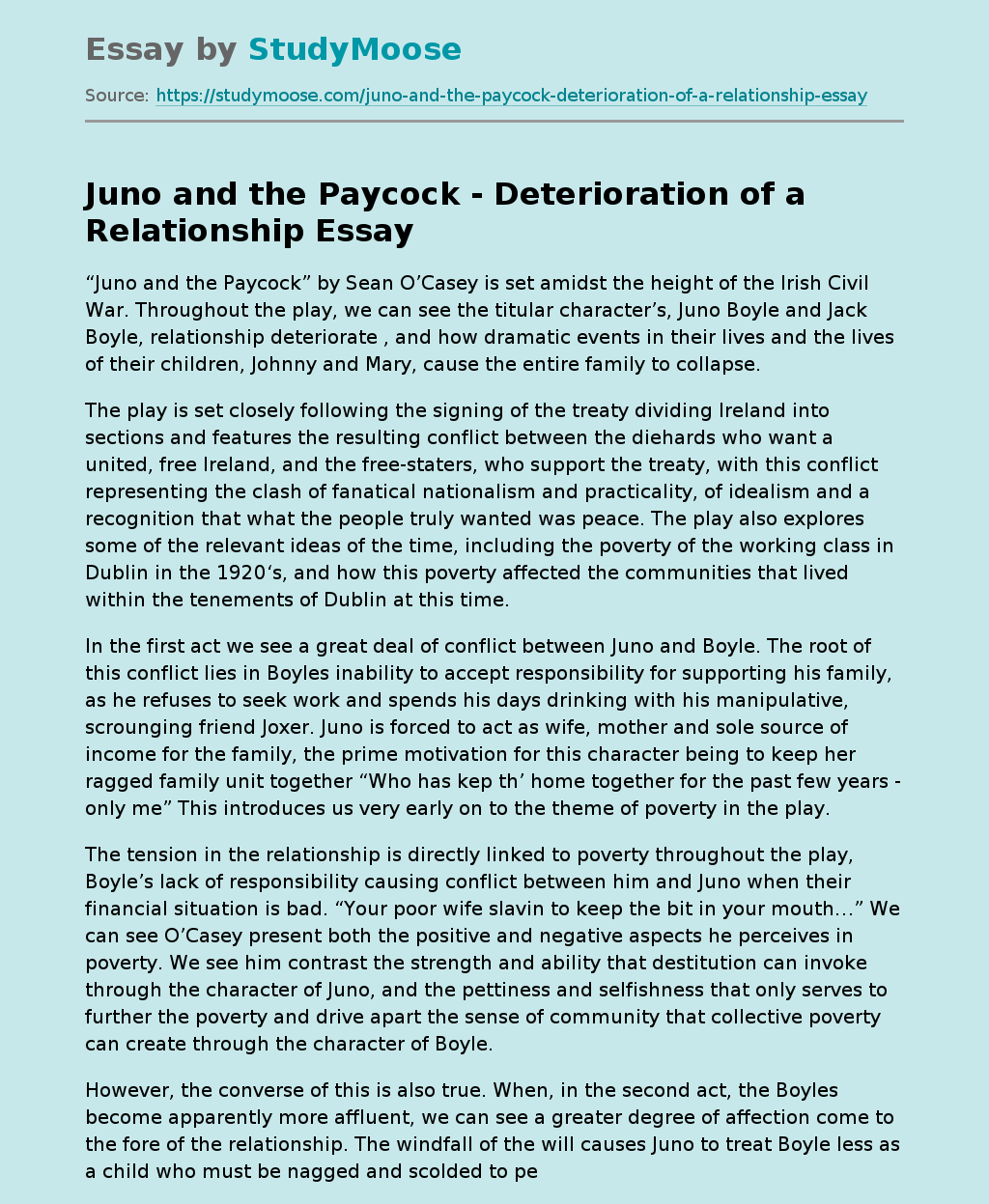