Analysis of the Movie "Juno"

Sixteen year-old Juno MacGuff is the type of girl that beats to her own drummer, and doesn’t really care what others may think of her. She learns that she’s pregnant from a one-time sexual encounter with her best friend, Paulie Bleeker. Juno and Paulie like each other, but don’t consider themselves to be exclusive boyfriend/girlfriend let alone be ready to be a family complete with child. Although she would rather not be pregnant, Juno is fairly pragmatic about her situation.

Don't use plagiarized sources. Get your custom essay on
“ Analysis of the Movie “Juno” ”
Get custom paper
NEW! smart matching with writer

Paulie really leaves all the decisions about the baby to Juno. Initially, she decides that she will have an abortion, but that’s something that she ultimately cannot go through with. So she decides to have the baby and give it up for adoption. But first she has to tell her father, Mac, and stepmother, Bren, that she is pregnant.

Although they would have preferred if Juno was on hard drugs or expelled from school, Mac and Bren too are pragmatic about Juno’s situation.

The next step is to find prospective parents for the yet unborn child. In the Penny saver ad section, Juno finds Mark and Vanessa Loring, a yuppie couple living in the suburbs. Juno likes the Lorings, and in some respects has found who looks to be a kindred spirit in Mark, with whom she shares a love of grunge music and horror films.

Vanessa is a little more uptight and is the one in the relationship seemingly most eager to have a baby.

On her own choosing, Juno enters into a closed rather than open adoption contract with the Lorings. During the second and third trimesters of Juno’s pregnancy which she treats with care but detachment, Juno’s relationships with her family, with Paulie, and with the Lorings develop. She gives the baby to Venessa, when she gives birth. At the end, Juno and Bleeker get together and they realized their feeling to each other.

After summarizing the movie, I want to analyze it. The 2007 film release of Juno offers certain challenges to past conceptualizations of girlhood, yet the representation of female sexuality as tied to traditional notions of ‘‘femininity’’ remains substantially unchanged. Juno represents a cultural artifact of changing ideologies of girlhood, yet it also functions as an example of the pervasive ambivalence towards the sexual subjectivity of girls.

The representation of girls as sexless is challenged. Rather than a stereotypical depiction of the female body as sexual object, sexual desire is visibly expressed and acted upon by the girl character. Throughout the film, Juno is shown as agentive in the decisions she makes about her body, sexual desire, and modes of self-expression; her classification as a girl who identifies as a ‘‘freak,’’ cares little about what other people think of her, and dresses in grunge style clothing connote an independent self-confidence that is apparent in all of her intimate relationships.

Although Juno has received praise for its originality, the story is most notable as a surprisingly familiar cultural fairy-tale. Juno’s character is understandable as a metaphor for conditions of female sexuality that continue to limit girls’ full expressions of sexual desire. Like the character of Juno, girls today are caught between increased expectations of agency on the one hand and continuing restrictions of their sexual expressions of desire on the other.

In conceptualizing Juno’s agency it is important to recognize the material and social ways in which Juno’s agentive ‘‘choice’’ is constrained. Juno is not a free agent; her actions and her agency operate in connection to material and social structures influencing her daily livelihood. The central paradox within Juno is that it celebrates agency for girls while simultaneously linking that agency to their physical desirability and role as potential reproducers.

Analysis of the Movie "Juno". (2016, Dec 09). Retrieved from https://studymoose.com/analysis-of-the-movie-juno-essay 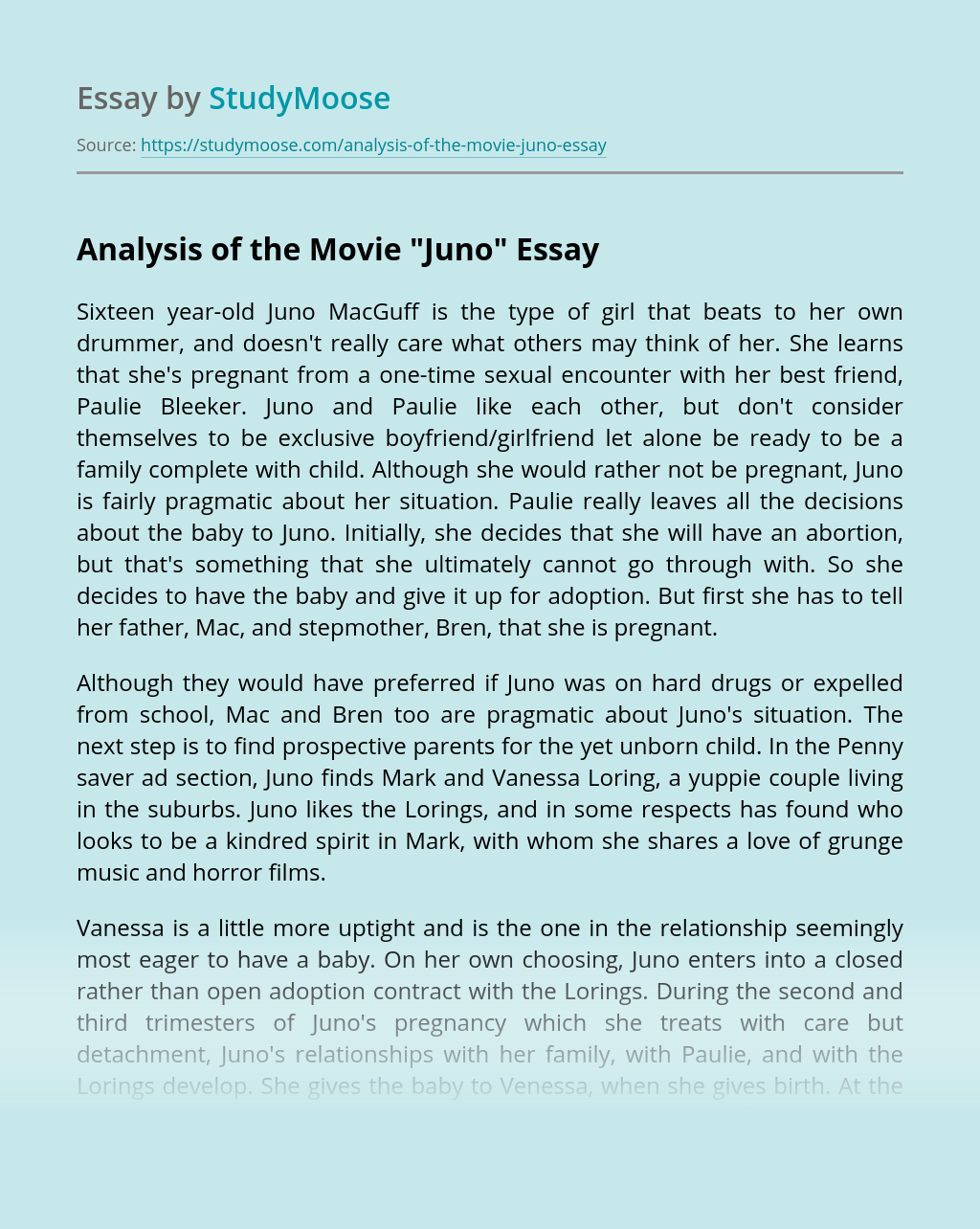