Analysis of Adolescence Developmental Psychology in Juno As

As each individual grow and age they learn more and more about themselves, shaping their personality and ways of thinking. An individual’s experience can greatly affect who they come to be in the future and since not everyone goes through the exact same life situations, each experience and reaction becomes unique. However, there are general stages that an average person will go through throughout his or her life time that researchers and theorists have categorized.

Don't use plagiarized sources. Get your custom essay on
“ Analysis of Adolescence Developmental Psychology in Juno As ”
Get custom paper
NEW! smart matching with writer

This essay will be examining an individual named Juno, who is going through the adolescence stage of her life, to see how the theories of developmentalists such as Erik Erikson, Urie Bronfenbrenner, Jean Piaget, and Lev Vygotsky apply to the development of Juno as she faces difficult life problems as well as how she deals with her obstacles.

The movie Juno is about a sixteen-year-old girl named Juno Macguff, who after having a one-night stand, became pregnant with her crush’s child.

After finding out that she is pregnant, Juno tells her crush and the child’s father, Paulie. Paulie supports Juno in her decision to have an abortion, however she never follows through with the deed after going to a clinic and meeting a pro-life protester. Instead Juno decides that she would carry the child to term and give it to another family who would raise the child with love and care. From there Juno is forced to tell her dad and stepmom about her pregnancy, who to her surprise, were supportive of her decision despite their lack of concern about her in the beginning.

The story continues as Juno searches for the right adoptive parents for her unborn child. To her luck, she finds a couple where the father is a failed rock star and the mother is infertile. Juno continues to meet with the couple for the next few moths of her pregnancy, updating them about her situation and helping them prepare for the incoming baby. Sadly, as time goes on the father the Juno chose as the adoptive dad realizes that he’s not ready for children and still wants to be a rock star. As a result, the couple divorces and Juno begin questioning what is love and what is the best course of action for her unborn child. After talking things over with her dad, Juno realizes that the person who’s been there for her all long and loves her for who she is was her crush, Paulie, all along. After professing her love to Paulie, Juno’s water breaks and she rushes to the hospital where a healthy baby is born. She decides to follow through with giving the baby to the original adoptive mother that she had chosen despite there not being a father anymore, she knows that the child will still be very loved and well cared for. The film ends with Juno and Paulie becoming a couple who is deeply in love despite how they had a baby before falling in love.

The story of Juno is an exceptional representation in a creative way of how an adolescence mind develops. When taking a closer look, one can see how Urie Bronfenbrenner’s ecological systems theory comes into play in a Juno’s development. In the beginning of Juno, her microsystem, which consist of friends and family, is not its best and even dysfunctional. As a result of this unstable and uninvolved parenting and friend microsystem, Juno becomes isolated from her peers at school as well as have uncertain relationships with those around her. In the film the effects of a person’s macrosystem can also be seen in how the cultural value strain causes Juno to be faced with harshness and judgement for her teen pregnancy. Which in turn results in Juno feeling upset at Paulie for making her pregnant and having her face all the discrimination that she is facing. However, despite the unpleasantness of her micro- and macrosystems, Juno doesn’t let it affect her over all ability to think logically and is able to keep her emotions from influencing her decisions about what’s best for her child. This ability of hers to think logically is described by Jean Piaget’s cognitive-developmental theory, in which adolescences above the age of 11 are in the formal operational stage where they are able to use hypotheses and deductive reasoning to create abstract ideas that are based on logic rather than emotions. Juno’s ability to do so demonstrates that she has mastered this stage of development. Urie Bronfenbrenner’s ecological systems theory also touches on the backgrounds of families and how different backgrounds can affect the development of individuals differently. For example, in Juno’s case, she comes from a divorced household that is not high in social economic standards but not deep in poverty either. However, because of the lack of warmth in her family she seeks warmth from others leading to the higher chances of mistakes happening, which for her was a teen pregnancy.

The film is also a great illustration of Erik Erikson’s Psychosocial Stages, specifically the adolescence year’s basic conflict of identity versus role confusion. As seen through the overall plot of the film in which a young girl, who is still in high school, is trying to find herself and discover who she is and what she wants for herself in life. According to Erikson, failure to successfully identify oneself in this time leads to role confusion which can result in the feeling of being lost in life and not knowing what one wants or even hopelessness. This can be seen at the starting portion of the film when it seemed like Juno was destined to be confused due to her dysfunctional family and unstable relationships. However, after having a discussion with her dad about what love truly is and when you know you’ve found the one, Juno comes realize exactly who she is, what she wants, and that she loves the father of her child, Paulie, and wants to be in a committed relationship with him after conceiving.

Another developmental theory that can be studied in the film Juno, is Vygotsky’s Sociocultural theory which focuses on how culture and social interactions have an effect of an individual’s development. This is especially present when seeing the multiple interactions that young Juno has, from peers at school who looked down on her to the parents who she thought didn’t care for her when in fact they did. All these different interactions aided in shaping Juno’s mind set of culture values and the type of culture and household she wants to raise her future family in.

Juno is an extraordinary film that is respected for both its content and the illustration of the developmental progression of the mind of an adolescence. The film demonstrations how an individual can grow and prosper well despite the hardships of life as well as provide a visual understanding of the different developmental theories that have been created to explain and categorize a person’s development. In relation to the developmental psychology course, it allows students to apply course materials in real world situations and to better understand how it is not just a single theory that applies in life, but rather that all the theories studied apply to one’s life in some sort of way and they work together to influence the person that we are today.

Analysis of Adolescence Developmental Psychology in Juno As. (2019, Dec 16). Retrieved from https://studymoose.com/analysis-of-adolescence-developmental-psychology-in-juno-as-example-essay 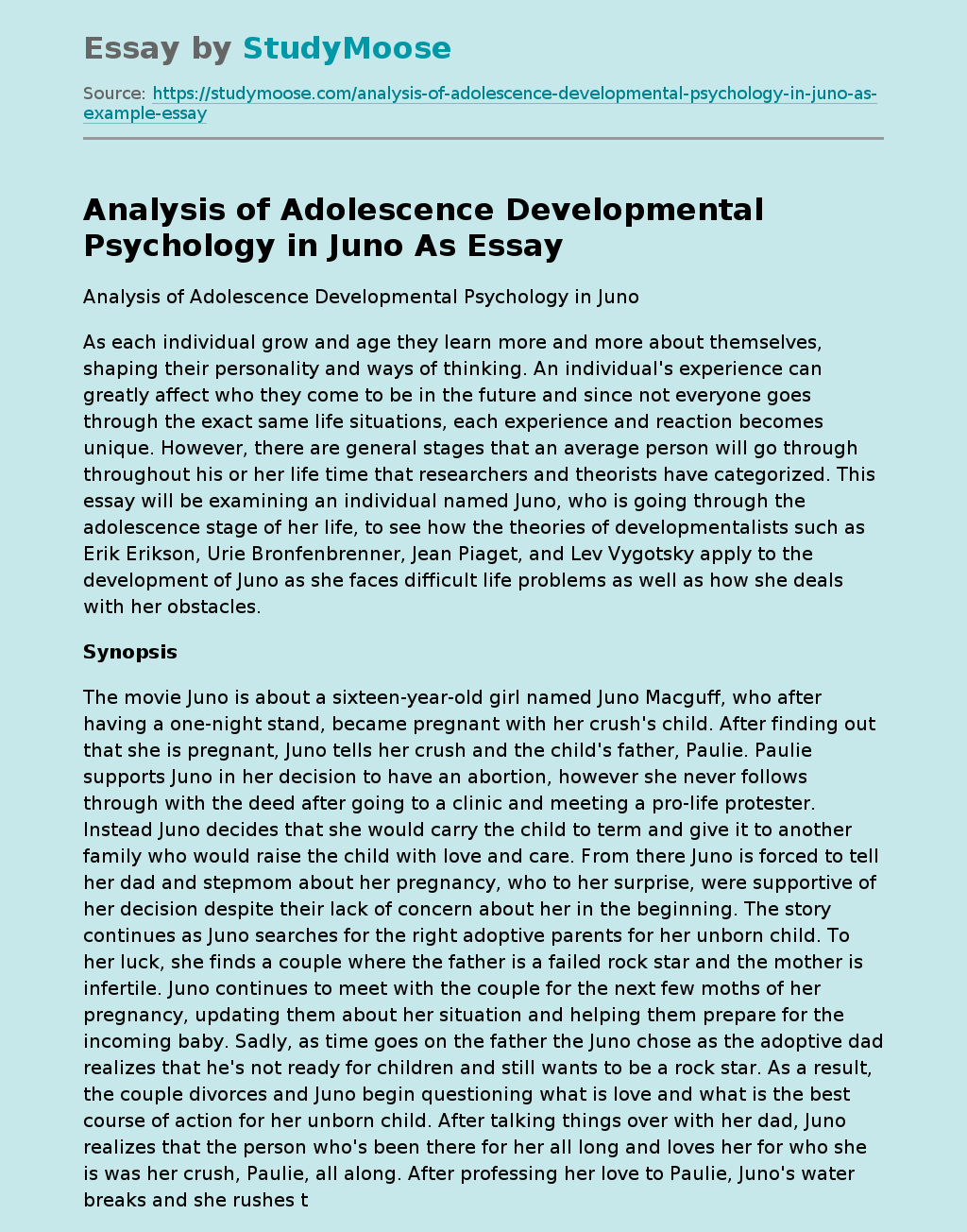