'Juno and the Paycock'

At the end of ‘Juno and the Paycock’, Juno says to Mary that although her un-born baby may not have a father, ‘It’ll have what’s far betther- it’ll have two mothers’. Does the play provide evidence to support the opinion that the female characters are superior to men?

‘Today in our modern society, women have equal rights to men. Jobs are not decided on gender and many men are house-husbands. This was not, however, the case in the early 1920s.

Don't use plagiarized sources. Get your custom essay on
“ ‘Juno and the Paycock’ ”
Get custom paper
NEW! smart matching with writer

Men where in charge, they where the working partner and the bread-winner for the family. Women where the house-wives who never questioned the authority of their husbands, yet, this was not the state of affairs in a two room tenancy lived in by the Boyle Family. In charge of this family was Juno Boyle, who not only was the sole source of income, a loving mother, and a devoted wife but the one person who took all of the family’s burdens and troubles on her shoulders.

Based on O’ Casey’s own mother who, single-handedly brought the O’ Casey up family when Sean’s father died. She was described as loving, hard-working, determined and devoted, which is what we come to know Juno as.

The father, “Captain” Jack Boyle (so called because of his being a retired merchant sailor, his reputation for telling colorful stories of the sea, and his incessant wearing of his naval-looking hat) constantly tries to evade work by pretending to have pains in his legs, “…the pains in me legs.

Oh the pain in me legs…” He spends all his money at the pub where he escapes from the reality of his situation with his ne’er-do-well “butty”, Joxer Daly. Jack Boyle is an unoccupied man who likes to think people respect him. He wants to appear philosophical and thoughtful to others. We know this from the way he talks about things, “I ofen looked up at the sky an’ assed meself the question – what is the moon, what is the stars?” He does not have a job and possibly resents Juno for being the one who ‘wears the trousers’. However, it is because of his refusal to get a job that the family is living in such a state of squalor.

Juno Boyle is a typical mother who loves her two children and would do anything for them. Her role as wife is not what would have been considered the norm in the 1920s as such. She is the only working member of her family as her daughter Mary is on strike and her son Johnny lost his arm in the Easter rising. Juno is unselfish and constantly thinking about her family. An example of this is when she waits for Jack just so she can make sure that he eats his breakfast, “Here, sit down an’ take your breakfast….” Juno is distressed by the fact that her husband does not have a job, “…don’t know where the next is going to come from.” She is not, however, naï¿½ve in thinking that her husband is incapable of getting one, “It ud be easier to dhrive you out o’ the house than dhrive you into a job.” She is a very competent woman and never thinks of herself but always of others. At the mention of the family getting money she immediately thinks of Jack, “You won’t have to trouble about a job awhile, Jack.” Juno is not however perfect as she holds too much respect for Jack and is easily taken advantage of. It is because of these characteristics that we immediately warm to Juno.

Johnny Boyle is a young man, who from the moment we meet him is on edge and acts in a suspicious way. He lost his arm in the Eastern Rising and was shot in the hip during Easter week, because of this he is full of self pity and hates to be left alone. Johnny betrayed Tancred, a neighbor and fellow comrade in the IRA, and is afraid that he will be executed as punishment. Johnny is a deceitful, ill-fated coward who is emotionally and physically injured. He is harsh when he learns of Mary’s fortune, “She should be dhriven outa th’ house she brought shame on…” He doesn’t think much of his father, “I’ll tell you what I think of you, father an’ all as your are…you…”

Mary Boyle is a young girl in her early twenties who is currently on strike with a Trade Union. She believes in sticking to principles and it is this that has cost Mary her job. When we first meet Mary it is only to see her reject Jerry Devine. She is discarding him for a Mr. Bentham, an English solicitor who later impregnates her. Mary is very self conscious and is conceited; “I think I’ll wear the green, it looks betther than the blue ribbon” Mary is worried about her fatherless unborn child growing up. “My poor little child that’ll have no father!” it is then that we realize that Mary has inherited many of her mother’s characteristics and beliefs. This stands her in good stead of becoming as good a mother as Juno was.

A distant relative dies, and an English solicitor, Mr. Bentham, brings news that the family has come into money. Mr. Bentham is a “…thin lanky strip a Micky dazzler- with his walking stick and gloves.” At first when we meet him he appears to be a kind, handsome gentleman who just wants to help the Boyles, but as the plot unfolds we soon realize that he is a self-important, non-religious coward, who when he realizes that he made a mistake in the will flees to England rather than face the family, “To leave you so sudden, an’ yous so great together.” We know that Mary love him very much, ”… whom has the she has the most love, and Charlie had it all” He leaves Mary soon before the news that she is pregnant surfaces, it is here that we realize that he is not good father material as has fled the responsibility having a child and the reality of his situation.

The family buys goods on credit, and borrows money from neighbors with the intent of paying them back when the fortune arrives. One of the people that they borrow from is Maisie Madigan, who after lending the Boyle family many things, from money to blankets finds out from an unknown source that the money from the will is not coming their way after all. She barges in and demands her money. Taking its worth instead, in the form of an unpaid for gramophone, ”… if I can’t get the cash, I’ll get the worth of it.”

At the end of the play “Captain” Boyle goes with Joxer to a pub to spend the last of his money and take his mind off of the situation. Joxer is a suck up to Boyle. His catch phrase ”A daaarlin…., a daaarlin…” From the start we don’t like Joxer as he is a foul mouthed, groveling drunk who hangs on every word of Jacks. He has no family and in my opinion would not know how to look after anyone other than himself. However, he can’t even do this. Joxer and Jack are two hopeless cases who give a bad example of a working class man in the 1920’s. In the last act we see Jack and Joxer leave for a snug where they spend the last of Jacks money.

At the end of the play, while Boyle is gone, Mrs. Boyle learns that her son, Johnny, has been killed, questionably by the IRA. Mary and Juno leave to live with Juno’s sister. Captain Boyle and Joxer return to the tenancy drunk, unaware of the situation. Throughout this play Jack has not changed. When we first met him he was coming back from the pub and now at the end of the play it is the same story. He oblivious to trouble and drunk. Juno on the other hand has altered during the play; she has become a more independent woman and has finally left Boyle to live in his own confusion and chaos that he has created. It is with this point that I come to my conclusion. In my opinion I believe that the statement ‘It’ll have what’s far betther- it’ll have two mothers’ is true in this case.

The women of the play show love, independence, unselfishness and many more motherly characteristics. And although the women do have some faults they do not even begin to compare with the faults of the men. The men is this play are mostly self-centred, lazy, cowardly and most of the time drunk, this is not what you want a child to grow up with. For these reasons I do agree with Juno’s statement and in this tragedy I strongly stand by my belief that the baby would be far better with two mothers than with one and a ‘father’.

'Juno and the Paycock'. (2020, Jun 02). Retrieved from https://studymoose.com/juno-and-the-paycock-essay 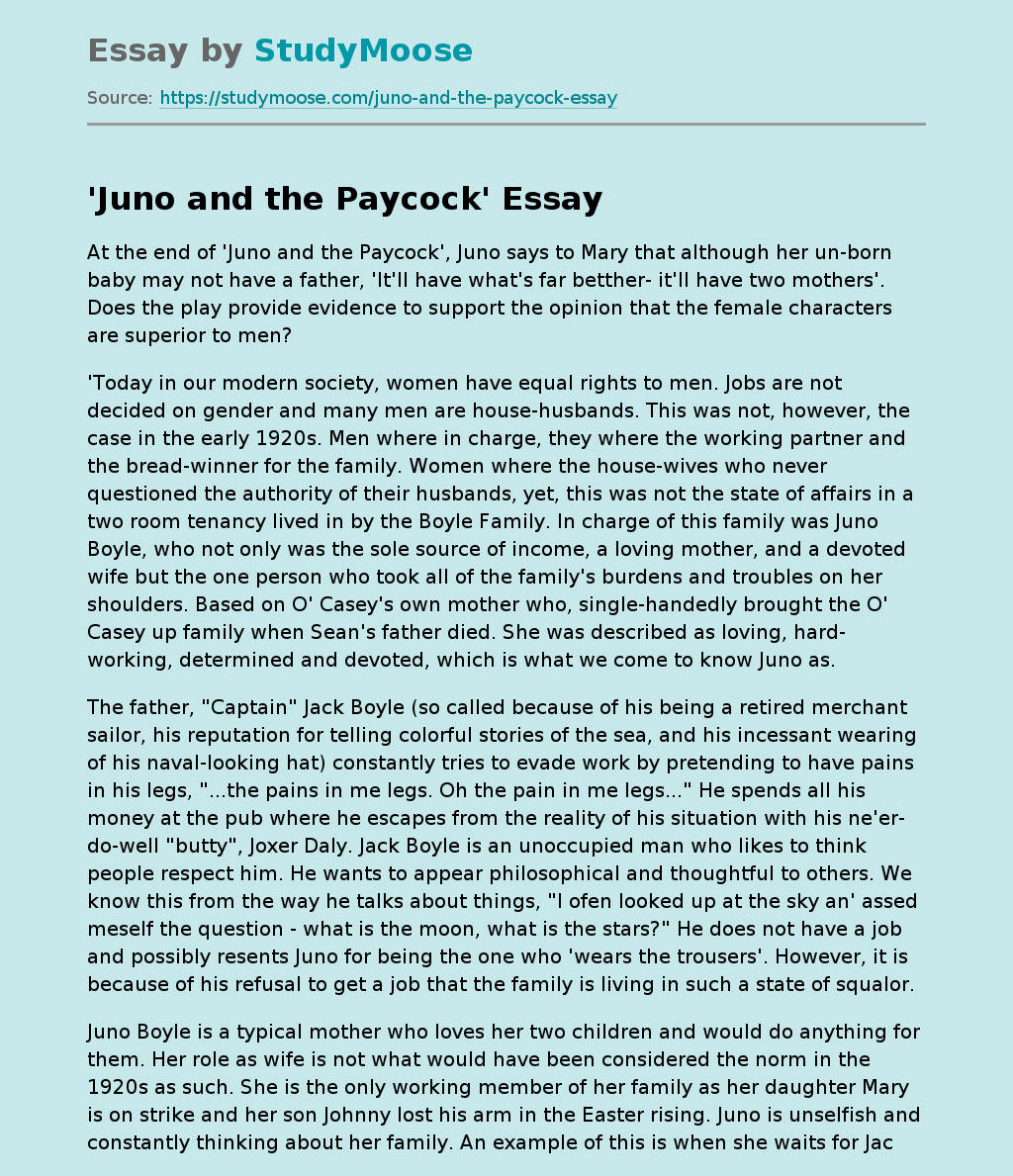