“The Lowest Animal” by Mark Twain

In Mark Twain’s “The Lowest Animal”, man’s once top place in Earth’s caste system is disputed. Twain expresses his opinion in this essay by writing it as a scientist who performs different experiments on people and animals to see which is indeed the “lowest animal”. He proves that human beings are cruel, wasteful, and the lowest animal on earth.

Twain uses human action and behavior to prove his belief that people are not superior to any other animal.

When talking about some of his theories, Twain writes, “[The hunters] killed seventy two of those great animals; and ate part of one of them and left the seventy-one to rot”. This quote proves that human beings are wasteful and only care about themselves. To these people, hunting is a form of entertainment. They kill for fun. And, instead of cleaning up after themselves or using all of the meat from the animals, they leave them to rot as if the animals were never alive in the first place.

Twain then proves that not all animals behave like humans by writing, “The grateful [anaconda] immediately crushed one of [the calves] and swallowed it, then lay back satisfied. It showed no further interest in the calves and no disposition to harm them.” Had the anaconda killed all the calves like the humans had, then one may question which animal is the “higher” one, but the anaconda only killed what it needed.

This suggests its consideration for other animals and its selfless personality.

Not only are human beings wasteful, but they’re also cruel. As Twain phrased it, “[Man] is the only one that inflicts pain for the pleasure of doing it”. Man knows he is hurting others, and yet he continues to do so. Other animals do not intentionally try to hurt their prey because they want to; they do not know that what they’re playing with is in pain. Human cruelty has also been reflected through acts such as slavery. Humans are the only animal who enslaves others, whether it be his own species or one he believes is lower than himself.

Although humans are believed to be the highest animal, their actions prove not always positive. Every second of the day something bad is happening in the world as a result of human action; whether it be bullying, murder, suicide, car crashes, or even littering. These negative and selfish actions make man the lowest animal. 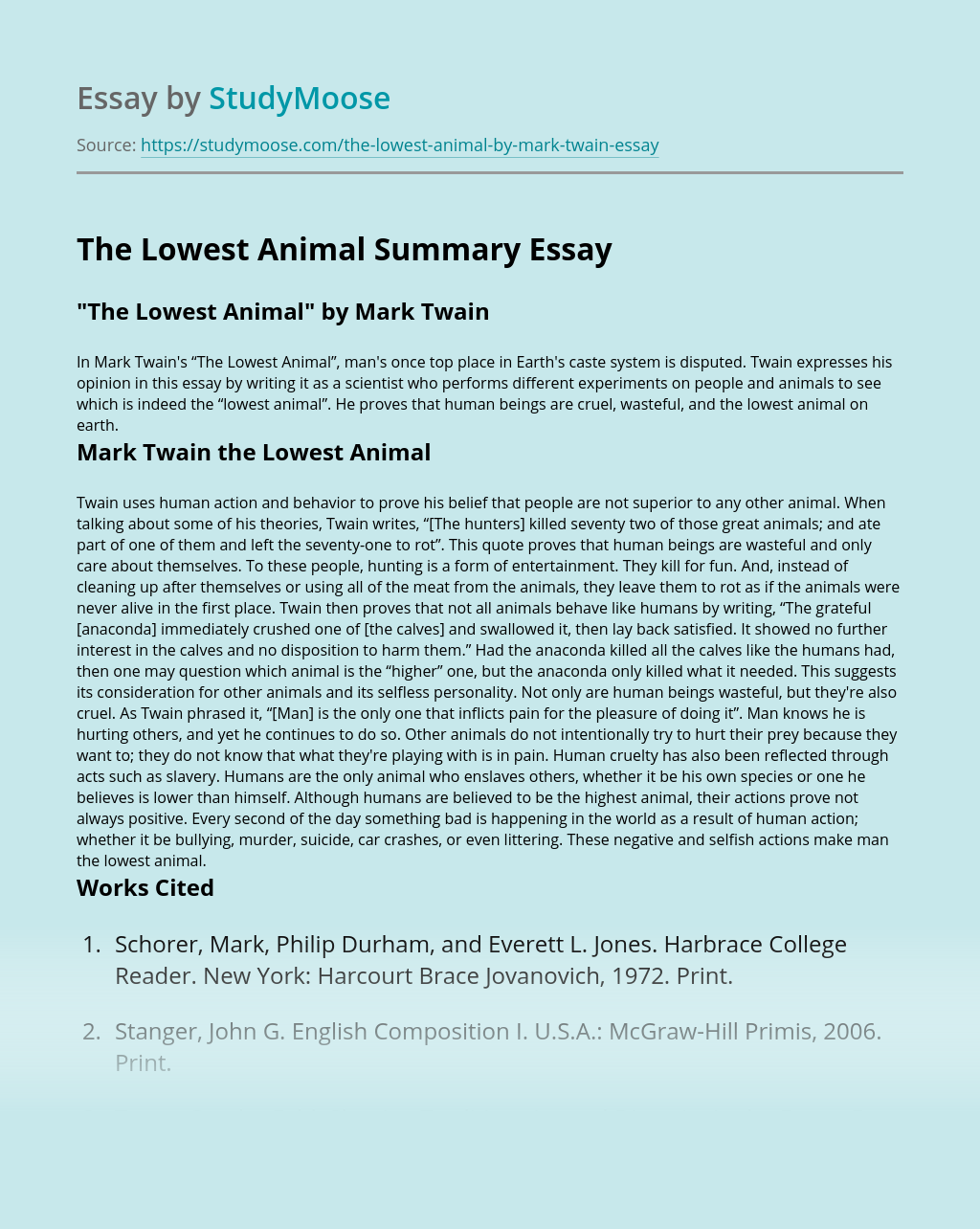 Don’t waste time
Get a verified writer to help you with The Lowest Animal Summary
Hire verified writer
$35.80 for a 2-page paper
Stay Safe, Stay Original