Pros and cons of horse racing

Horse racing is an adrenaline filled sport for all the participants. It is a short lived, action packed, joy ride. The sport has increased in popularity over the past several years, due to the need for a rush, and is continuing to rise. Due to this massive influx in size the amount of money the business is contributing to the government is large. The business has also had to hire a multitude of people to help carry out the job of keeping the business as orderly as possible.

Don't use plagiarized sources. Get your custom essay on
“ Pros and cons of horse racing ”
Get custom paper
NEW! smart matching with writer

The enlargement of the horse racing industry has also made the stakes for money in the winning a much bigger deal for owners which means they will do most anything to win. This includes the use of illegal drugs on the horses and many other forms of cheating. When the prize money raises so does the need for as many winning horses as possible for horse owners in the industry. The need for horses has led to an intense amount of over breeding of thoroughbreds.

Then, when talking into account supplies and employees, they produce around 101.6 billion us dollars. Governments around the globe benefit highly from the industry and horse racing being banned could have a drastic effect on entire populations from lack of money. Horse racing being banned could also cost millions of people around the globe their jobs and businesses. According to a recent labor poll over 4.6 million people are involved in the horse industry in some way, either as owners, employees, service providers or volunteers. This includes 2 million horse owners, of which 238,000 are involved in breeding. When it comes to competing such as the jockeys and handlers, 481,000 people are involved. When looking at the amount of people involved in other activities such as grooms, veterinarians, and care takers, 1.1 million involved. 119,000 service providers and 702,000 employees, full- and part-time and 2 million family members and volunteers. That means that 1 out of every 63 Americans is involved with horses.

Many of these jobs are held by lower-income families. This could be disastrous when taking into account all the people who depend on the money they make from this business. Banning the horse racing industry could affect the local areas around them badly. The results of the one study done by students at the University of Louisville show that the horse business is a highly diverse industry that supports a wide variety of activities in all regions of the country. It combines the primarily rural activities of breeding, training, maintaining and riding horses with the more urban activities of operating racetracks, off-track betting parlors, horse shows and public sales. Usually when people go to watch a race they want to get dinner or spend their newly eared money in the expertly placed, over priced restaurants and shops. These strip mall shops gain money and business from these enthused shoppers. If there is no race track, these shops and small businesses could have a plummet in sales and be shut down for lack of ability to pay. Additionally, the volume of consumers that are driven to the racetracks each year create a need for additional medical care, education for children and families of track staff, as well as the local universities. Having the race tracks removed could lower business income for hospitals and schools as well as universities. The United States alone produces 3 billion from horse racing and tourism. Over 67 percent of activity as well as gambling money come from tourists going and paying at the race track. As a source of entertainment as well as having food venues and shopping areas round the premises of the track, it is an ideal hot spot for tourists to spend their money; whether it be on food, gambling, or shopping. The revenues made my gamblers who are not local to the area is 785 million dollars. Gambling is exciting as well as engaging for the participants. For those who enjoy taking risks, the propensity for risk associated with gambling may be both simulating and challenging. Also, gambling on horse racing allows the participant to challenge themselves with predicting the potential wins and losses. Gamblers from out of the country are obviously a large part of the income on the race track. Banning racing could make the area of choice loose business all around from not having the interest of tourists any longer.

When it comes to betting on horses in horse racing, bettors rely on the accuracy of the statistics on the horses. The statistics allow the bettors to know which horses to bet and wager on. Cheating, such as the latest scandal called ‘doping’, can affect the reliability if those statistics. Doping and other forms of cheating using drugs can harm the jockeys and horses in the long run. A few of the top drugs used in horse racing are cocaine, blcarbs, anabolic steroids, blue magic and heroine. Drugs such as heroine and anabolic steroids are typically injected into the lungs of the horse or the heart as to keep them from feeling pain and to slow down the rapid rate at which they would usually work to keep them from tiring. This can cause break downs on the track because of the lack of oxygen entering the blood stream at such a high rate of physical activity. Drugs such as cocaine blcarbs, and blue magic are usually pumped into the blood stream on added into the grain. What the purpose of these are is to give the horses an energy boost that is un natural and these can also cause break downs on the track because of the amount of stress the horse is putting its body under without being aware until it is too late. The form of cheating of which is in drugs is considered cruel to the horse. Another form of cheating in the racing industry is toe grabs. A toe grab is a raised rim on the toe area of a horseshoe; its purpose is to help the horse “dig in” to the track and reduce sliding much like football cleats. However, there are increased stresses on the limbs from this stronger grip on the ground and quicker “stops” of the feet when they land while normally the foot slides forward just a bit on the ground before stopping, but toe grabs arrest this slide. It’s also been suggested that toe grabs add stress to the limb by raising the toe relative to the heel. Toe grabs on front feet have been associated with increased incidence of catastrophic injury in horse racing.

Horses involved in racing are being over bred and this is causing weakening in the breed and mass slaughter of those horses that do not make the cuts. While over-breeding in the racing industry is the derivation of availability, inbreeding, and drugs are inescapably interconnected with the callous and brutal practice of slaughter as is the insatiable demand for horse meat for human consumption principally in European and Asian cultures. Inbreeding and drugs have weakened the modern Thoroughbred while the horse meat industry remains a lucrative multi-million dollar enterprise. More than 100,000 unwanted horses are born in the U.S. per year. Roughly 83,000 of those horses are slaughtered every year just in the United States because of improper breeding. A recent study was done and it showed that if 1,000 horses are bred for racing, only 300 will make it to training. Of that 300, only roughly 75 horses will make it to racing. Only about 4 horses will make it to live their second race. Most horses that are not used for racing are sold to meat and glue factories. Only 12% of horses are properly retired and either sold to a family for other riding uses it retired to the pasture. This unnecessary breeding has caused weak bones in the thoroughbreds and diseases passed down in blood lines.

The weakening of the breed has aroused a lot of controversy over whether or not horse racing should continue due to this issue. In the end there are both pros and cons to whether or not horse racing should be banned. Horse racing contributes an incredible amount of money worldwide and produces multiple job opportunities as well as business in local shops. It also brings in tourism to the track and surrounding areas which can help great deal of money also. Horse racing also has a large issue with cheating that can harm both the jockey and the horse against their will. The use of illegal drugs and product on the race horses’ pre race can significantly alter the horses performance whether for the good or the bad and in the long run, harm the horse terribly. Also over breeding has become a widely known issue across the globe and is causing a mass amount of horses to be sent to slaughter. Over breeding has also caused a decline in the stability of the breed. Horse racing both helps and harms.

Pros and cons of horse racing. (2016, Mar 07). Retrieved from https://studymoose.com/pros-and-cons-of-horse-racing-essay 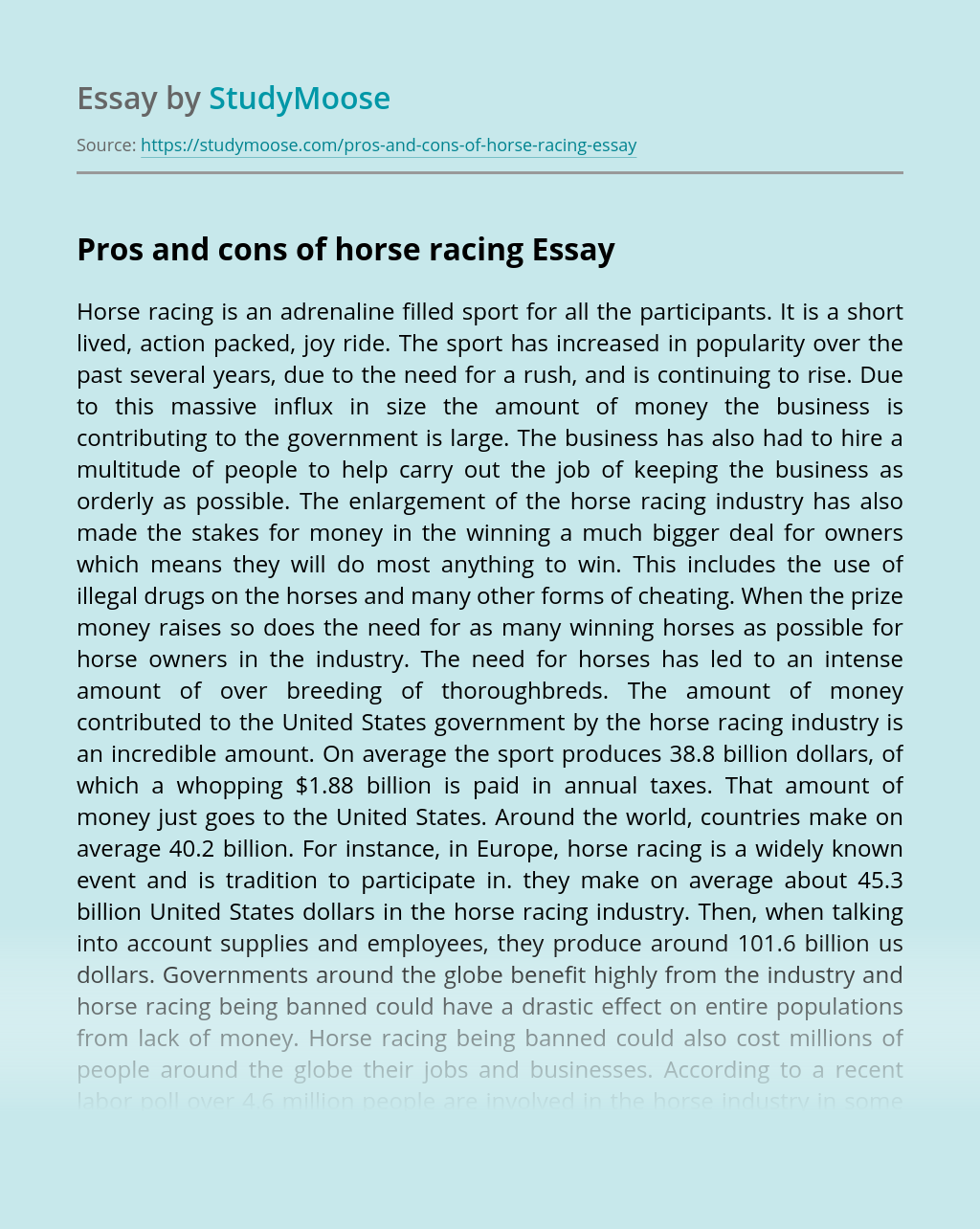