Analysis of Sherwood Anderson's I Want To Know Why

Sherwood Anderson’s coming of age “I Want To Know Why” is the narrative of an adolescent boy whose world revolves around racehorses and the perplexing emotions that surface when he meets the trainer of his favorite horse. In this tale, our narrator painfully learns the disappointment of upholding our idols to unrealistic standards and, more importantly, after the loss of innocence, the realities of the world are not always as idealistic as once envisioned.

Sherwood Anderson takes us to the southern town of Beckersville, Kentucky during a time where slavery is abolished but black people still do menial work.

Don't use plagiarized sources. Get your custom essay on
“ Analysis of Sherwood Anderson’s I Want To Know Why ”
Get custom paper
NEW! smart matching with writer

There is nothing else extraordinary about the town except for in the spring; Beckersville becomes somewhat of a stay over for all of those involved in horses and horseracing. For about a week all of the prominent horsemen are in Beckersville and “horse racing is in every breathe of air you breathe.”

Our narrator, 15 and simple minded (or perhaps merely innocent), has a passion for racehorses, so this is undoubtedly his favorite time of year.

Once all of the prominent horsemen leave town, he and three of his friends decide on a whim to take a trip to Saratoga in upstate New York to see a horse race. While there, the narrator sees his favorite race horse Sunstreak and has the opportunity to meet the trainer. He encounters the horse trainer twice. The first time he meets the trainer is alongside Sunstreak right before the race. During this encounter, he is enamored with the trainer, claiming to love him even more than his father.

He identifies with the trainer as a man who shares the same ideals and passions as him and in our narrator’s eyes and heart, this undeniably makes the trainer a man of great admiration. Sunstreak, breaking a world record, wins the race and for our narrator, this justifies his fondness of the trainer even more.

The second time the narrator meets the horse trainer occurs later that night when he unknowingly follows him to a brothel and the narrator’s feelings for the trainer take a drastic turn. Peering through a window, he sees the trainer bragging about Sunstreak, claiming that he was the one that had won the race and broken the record. The narrator grows fiercely angry as he listens to the trainer carrying on. He slinks away, hating the trainer. His tumultuous emotions churn away at why: Why would a man who shares the same passion as him, a man who sees the beauty in horses as he does be at such a “rotten” place carrying on with such “rotten-looking” women and doing such “rotten” things? This second encounter with the trainer has spoiled his passion for thoroughbred horses and all the wonderful and “lovely” things he once associated with the sport have also soured.

Although we never learn the name of our young narrator, we quickly learn that he is naive and obsessed with horses but we also learn that he has a good heart. He has yet to think of the consequences of his words because he refers to the black people in town as “niggers.” In contrast, he speaks so fondly of them that we can only assume that the only reason he would use such a word in the absence of malice is that he simply does not know any better, so we excuse him. He is a casual acquaintance of a black man named

Bildad Johnson. Bildad lives a harsh life but the narrator does not see Bildad’s struggling existence for what it is. Quite often, Bildad

has to “flatter and wheedle” for one job after another, usually working as a cook for ranchers or being involved in laborious stable work. The narrator idolizes the life Bildad leads because he is constantly around horses and does not realize the harsh reality of Bildad’s world. Our narrator believes that Bildad lives such a wonderful life, he innocently proclaims, “I wish I was a nigger.” It is with remarks like this we can grow to appreciate the narrator’s naivety and are not offended. We also see the goodness of the narrator’s heart when he and his friends set out for Saratoga. Our narrator is not wealthy, nor are his parents, but since he is the one with the most money, he shares his money with his friends. In addition, during a stop at Niagara Falls, he makes sure to pick up small gifts for his family.

Idealistically, horses are considered beautiful and majestic animals. In contrast, a racetrack is a dirty, seedy establishment, consumed by the greed and desperation of men either making or losing money. In our narrator’s innocent and pure love for thoroughbred horses, he has encountered an aspect of adulthood he is not yet ready to accept. Perhaps he will once again recapture his love for these animals but it is doubtful that he will ever view a horse track or its immediate surroundings in the same light again.

Analysis of Sherwood Anderson's I Want To Know Why. (2016, Jun 26). Retrieved from http://studymoose.com/analysis-of-sherwood-andersons-i-want-to-know-why-essay 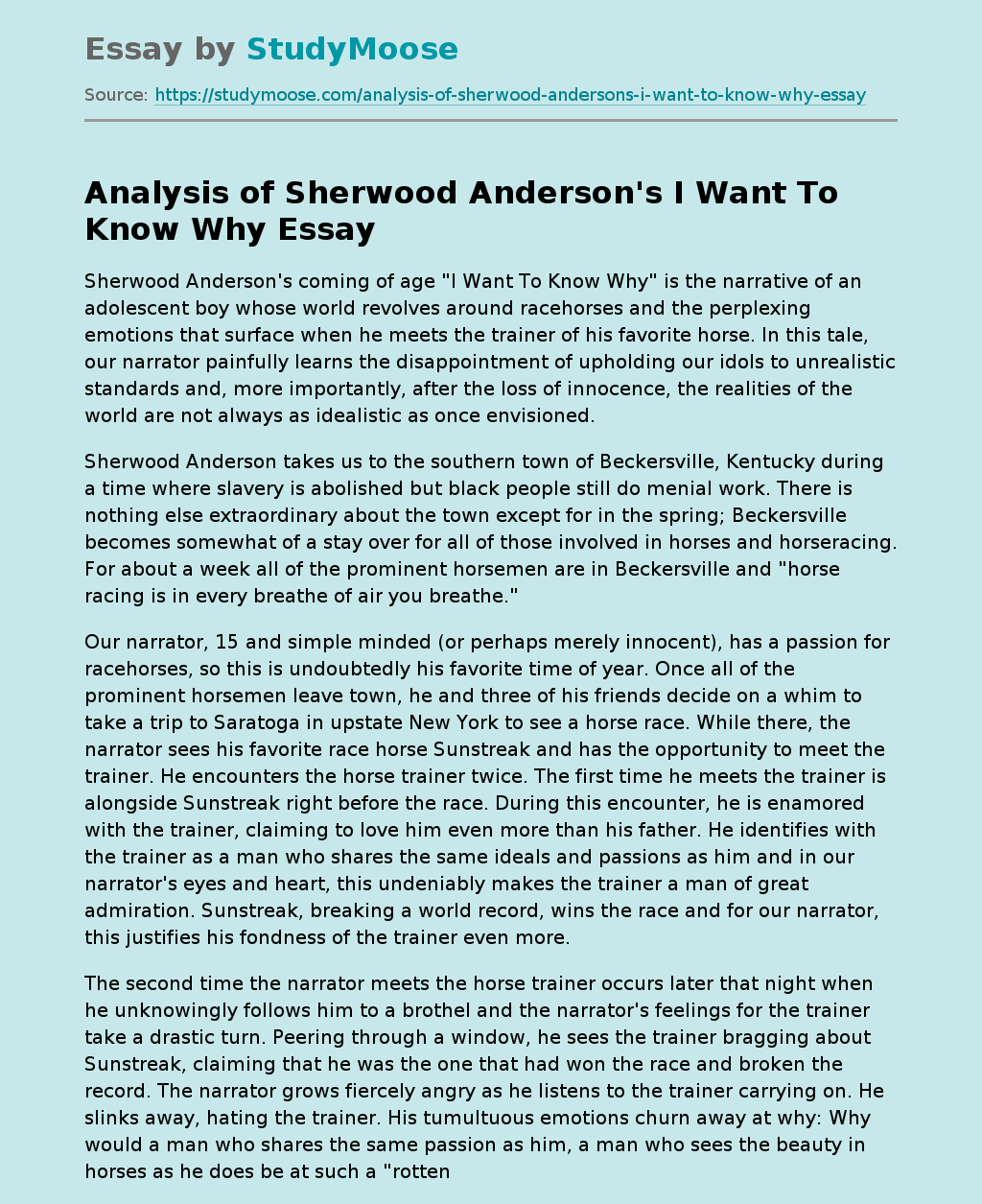