This is a really tough decision and the mind is constantly changing against to the conclusion. But after a thorough consideration, I don’t think the team should race this time. John should get more data and information for the engine failure until he decides to race again for the next season. There are numerous ways to decide to race or not for John Carter when it comes to decision making. He can make the decision based on either his fellow chief mechanic Tom’s view, or the engine expert Paul’s assumption.

Turn in your highest-quality paper
Get a qualified writer to help you with
“ Harvard Business Review: Carter Racing Case ”
Get high-quality paper
NEW! AI matching with writer

However, regardless either way, the conclusion should be reached by some sort of quantitative analysis.

At the first glance at the scenario, the immediate reaction was to throw all the numbers provided into the opportunity cost calculation, and compare the pros and cons between the options. However, in order to come up with the most accurate prediction on the expected value of the outcome, it is necessary to gather the all of the associated costs in dollars.

John can easily calculate the cost to withdraw by adding up the fees from the data that was provided in the case. Yet, for the other options: race and win, race and fail, it is impossible for us to calculate the precise cost of “winning” and “failure” since there are no price tags for fames and sponsorship possibilities if the team wins the race, as well as the risks that might happen in relation of gasket failure such as life, and destructing in team reputation.

Thus, without the inclusion of all the necessary factors, the result of calculated the expected value would be useless in measuring losses and gains.

The second reason that I think John should wait for the race is due to insufficient information provided in the case. In addition to the chart that was provided by Tom (exhibit 1), there should also be a chart showing the distribution on head gasket success is related to temperature since the race might begin in a day with fairly low temperature. Thus, if I were John, I would have to determine to postpone the race until further information is gathered.

Of course it is not easy to convince someone on things that no one can be guarantee of. Thoughts and doubts gone through the mind such as: the race itself is in the nature of a risky business; wondering if John should grab the opportunity right now before it flies away because next season is still unknown, etc… Even after knowing insufficient information was available, it is still really tempting to choose racing rather than withdraw. This tension fighting unconsciously in the mind reminds me of the principle of scarcity , which people tend to value potential loss (the fees for racing) more heavily than potential gains (engine invested and human life). These feeling often caused managers to have bias on decision making.

Besides the method of quantitative calculation on costs, the problem John faces also consists of the selection between two different sides of recommendations: one from his chief mechanic Tom who suggests for race, and the other engine mechanic Paul who opposes the race. The argument and data presented by these two mechanics act as a persuasion to John. Whereas, Tom and Paul both have extensive experience in racing, yet Paul “lacked the sophisticated engineering training” as mentioned in part B of the reading raised an interesting dilemma on whether John should shift more of his selection power towards Tom based on the insufficiency of Paul’s training.

To tie this case to Mulvey’s article, the purpose of a team is increase the strength of the organization by forming and adding up the different perspectives together. For organization leaders, John, in this case, it is very important for him to balance the team dynamics to make sure each person’s voice is equally weighed in team function while such balance is very easy to lose grip once one side of the opinion is valued too heavily. This situation is well demonstrated between John, Paul, and Tom. At the beginning of the case , Paul showed his position as a strong opponent against the team to race.

But as the case evolves, Paul’s attitude changed as Tom showed the chart in exhibit 1, and agreed to race at the end. It seems that Paul has given up his beliefs and agreed with the team on racing by accepting the data provided by Tom of who that has a higher rank than Paul even though the data seem to be insufficient to persuade Paul’s position from racing. This matches Mulvey’s views of the presence of someone with expertise and compelling argument since Tom is the chief of mechanic, which might have led an assumption to indicate higher level in qualification. With such precedence assumption and numerous useless discussions on with John on the gasket problem, it is very likely for Paul to accept Tom’s data as long as it makes some sense in explaining the gasket problem.

In addition, there is also a subtle sense that Paul may have felt the pressure from the team to cause him to conform. It is clear that the team leader, John, is feeling frustrated about the race sponsorship and eagerly wishing to get both of the mechanics’ approval to race. Being the only person that disagrees, Paul gradually lessened his voice. This illustrates the points of pressure from others to conform and dysfunctional decision making climate that Mulvey has brought up.

In sum, as if I were John, it is essential for team leaders to manage the team with a great sensibility of each team member’s personality and expertise in order to maintain the participation spirit. A well balanced team would allow people like Paul to speak up his mind and not compromise his views, and still utilize Tom’s expertise. A well-functional team is the only way to have a possible appropriate decision making solution. 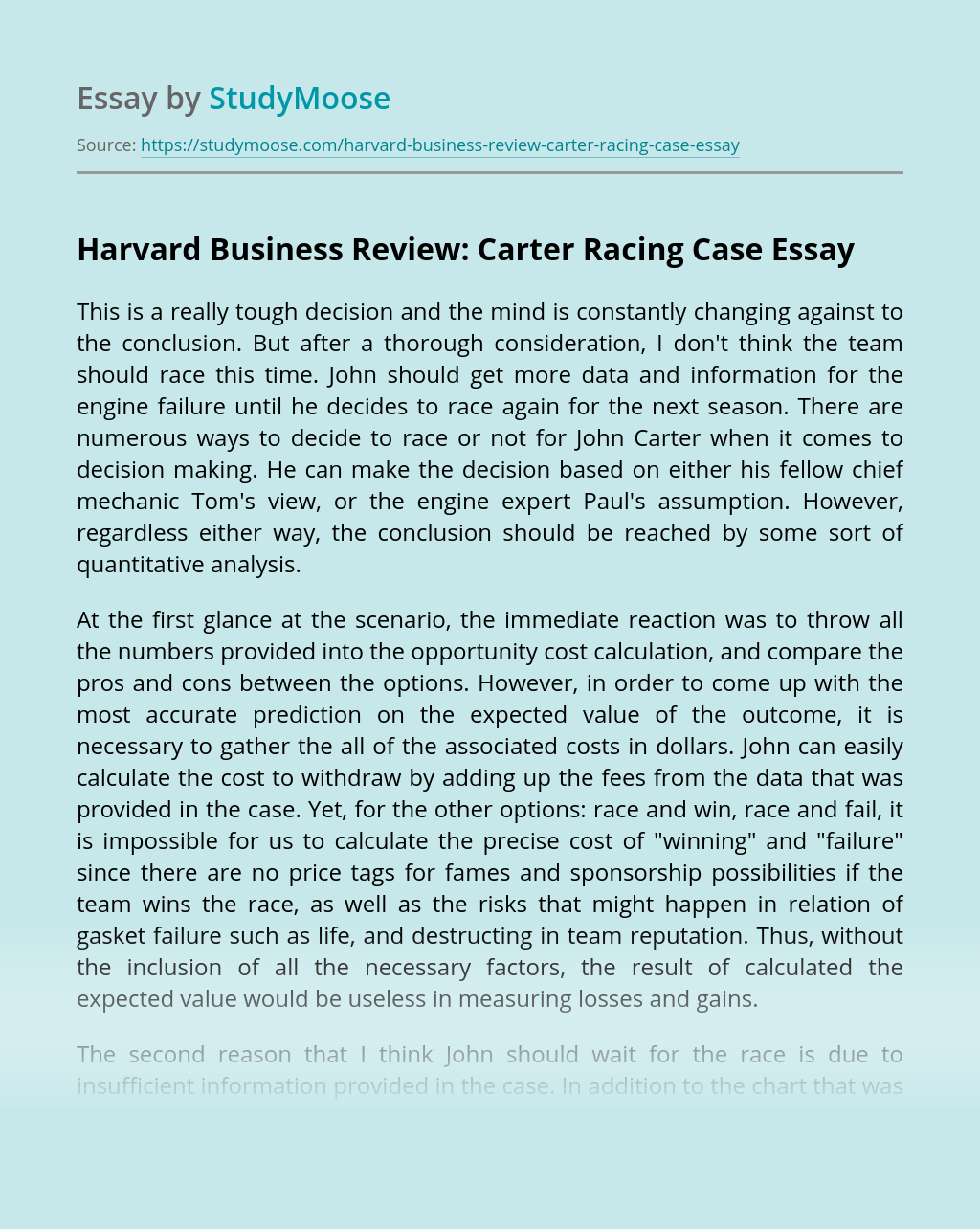 Turn in your highest-quality paper
Get a qualified writer to help you with
“ Harvard Business Review: Carter Racing Case ”
Get high-quality paper
Helping students since 2015
Stay Safe, Stay Original