After analysis of Mr. Alexander’s proposal, it is obvious why he should take advantage of a real estate investment opportunity. The experience he would gain coupled with the added income would establish a solid foundation for making more investments in the future. To this end, however, I find Alexander’s plan for the Revere Street property falls short.

A major deficiency is that his projections are almost entirely predicated on estimates and assumptions that are neither conservative nor reliable. In a similar vein, Alexander’s “DIY” approach is not only exemplar of naiveté, but also suggestive of many implications that were overlooked in his proposal.

Turn in your highest-quality paper
Get a qualified writer to help you with
“ Harvard Business Review Case- Revere Street ”
Get high-quality paper
NEW! AI matching with writer

And, even more discouraging, a best-case scenario analysis reveals that even without complication, there is little room for error afforded by the plan. Therefore, I would not advise Alexander to move forward with his investment strategy, as its potential for reward is far outweighed by its risk.

In a vacuum, Alexander’s proposal would be very feasible and attractive, but in reality the real estate and rental industries are incredibly volatile and hard to predict even for specialists in those fields.

The success of Alexander’s proposal is not just contingent upon a host of variables, but variables forecasted by an amateur lacking a sense of conservatism.

To begin, the projected costs of the project include no allowance for incidentals. This is a giant red flag. Even if Alexander outsourced certain responsibilities to experts, the likelihood of error and unforeseen costs in bidding for a property, closing the sale, major construction and renovation, and managing a rental property is almost certain.

So, without a contingency reserve, the problems are obvious. But even worse, Alexander, a nonspecialist in any of these pursuits, is the one handling a majority of these functions- this means it is no longer a question of will there be unforeseen costs, but actually how much should be anticipated? On this front alone I am incredibly skeptical of the proposal.

To bring this project to fruition and realize the gains projected, the following processes need to occur without incident: Alexander’s bid must be accepted by the seller, which requires that he obtain an appropriate mortgage, and avoid forfeiting his deposit, which could be something to the tune of $17,500 or more. For the closing sale of the property to go smoothly, there mustn’t be any lien issues from the existing bank withholding loan proceeds to the architect, since the construction was not finished. After this, the construction needs to be essentially error free and at an expedited pace to be complete by the four month timeframe set- and this is without a professional general contractor.

Additionally, the job must not exceed the $165,000 figure that was given by a non-independent contractor, who very likely may have given a low-ball estimate to seem like an attractive candidate. The last architect was off by $115,0001, indicating that the scope of the work necessary to complete the job may be deceptive and much greater than anticipated, however there is no reserve beyond budgeted amount, making this possibly the hardest mission to accomplish. If, however, the project is completed within the four allotted months, and without going over budget, the next phase is filling vacancies, which Alexander is also planning to have accomplished by the end of the fourth month.

This means that during the construction process, Alexander must also be actively marketing vacancies, searching for, interviewing, and selecting tenants, and securing leases. These tenants must also be willing to accept the rental rates to achieve Alexander’s target level of rental income, which are almost $10,000 higher than the current owner’s figures. If this is not accomplished, he could be losing $2,000 per month on each unoccupied unit. Beyond these start-up efforts, Alexander’s plan will only be successful if the operating costs do not exceed what is specifically budgeted for in his cash flow assumptions- these do not include costs of fixing up the units between tenants, updates, reserves for evictions, bad tenants, or law suits, and any other unforeseeable expenses.

Though possible, it is incredibly hard to imagine that the stars would align so perfectly that all the aforementioned conditions are met as forecasted and result in triumph. It seems much more likely that some unforeseen incident will paralyze the process, creating a rippling effect that throws off virtually all of Alexander’s predictions. For example, a delay in the closing process would delay construction, delaying when tenants can move in and therefore when income can start being generated, and so on. The plan is contingent upon virtually incident-free operation that is somehow achieved under the direction of an amateur- this is fundamentally flawed. As such, I believe Alexander’s proposal is far too deficient in and of itself to be used as a viable plan.

Beyond the limitations of the actual plan, another shortcoming of pursuing this opportunity on Revere Street are the serious implications associated with Alexander’s “do-it-yourself” approach. By not outsourcing responsibilities to experts, he may be avoiding the explicit employment costs, but he is likely to pay more for doing the job himself later.

For example, hiring a general contractor would ensure that the building is constructed to code, would be more efficient because the GC would know how to best handle subcontractors and manage the overall project, both of which would help expedite the process and give Alexander time to do other value-added functions. If not, Alexander risks serious code-violation liabilities, will probably manage less effectively, and the project could therefore take much longer than anticipated, which has the same rippling effect as in the aforementioned.

Additionally, Alexander may have seriously underestimated how demanding the project will be, and did not consider anywhere in his proposal how this may compromise his current full time job. Even with a general contractor hired, he will still be tasked to find tenants to fill the vacancies, while juggling the rest of the logistics, and it seems like a tall order. Since it is already included in the budget, I would hire outside management at least for the duration of construction to help find tenants.

One of the major issues being an amateur in this field is determining good tenants from bad, and the costs associated with bad tenants could be significant, and again are something that Alexander did not include in his projected costs. Management would be instrumental in mitigating this risk, as they are usually well versed in landlord-tenant laws that Alexander may not be aware of, and also add more time for Alexander to focus on other important responsibilities.

In general, I disagree with Alexander’s plan to save costs by doing work himself, because this generates a greater risk for both explicit and implicit costs- i.e. bad landlord-tenant relationships could taint Alexander’s reputation and dissuade other potential tenants from renting. He also risks compromise to performance at his current job, general welfare, and all of his time. By outsourcing some of the responsibilities, many of these issues could be avoided. But, if problems do arise, is it worth the consequences?

Though the risks are significant and abundant, the potential for profit is always worth considering before dismissing an opportunity. To assess the profitability of Alexander’s plan, I ran a best-case scenario analysis. By exclusively using the figures as set forth in the proposal, and excluding the additional costs I outlined above but were overlooked by Alexander, I determined the ceiling for profit potential. Exhibit 1 shows the cash flow assumptions, including costs and cash not included in Alexander’s cash flow statement, but included in his proposal. Holding all other factors constant, year 1 of operations would realize only $2,113 in NOI and year 2, and all subsequent years, would see $15,610.

On a $99,000 cash investment, his pretax return in year 1 would only be 2.13%, and then 15.8% in subsequent years. However, this is a best-case scenario, and given the major caveats discussed in the aforementioned, I believe that Alexander will actually not break even in the first year, and be looking at a significantly lower rate of return in years to come. So, even if everything were entirely feasible and it didn’t come at such an immense risk, I would not say that the effort put into this project would even be worth it. One of the biggest risks concerning insolvency is that should Alexander not be able to cover his debts, under the bank’s law, he is personally responsible, which means that this investment could end up in devastation for him and his family. With so much uncertainty, and not a big return, the risk is just too great to justify pursuit of the reward.

In sum, because of faults with the plan itself, the major implications of Alexander’s DIY approach, and a return greatly exceeded by the associated risks, Alexander should not invest in the Revere Street property. However, I do agree that pursuing a real estate investment opportunity is wise, but under certain conditions. One of the biggest conditions that must be met is that he base his projections and make his plans off of expert opinions- he should invest in help and recognize that as an amateur, he is neither qualified nor capable of making the best decisions, and would benefit from seeking expert advice. Similarly, he should place more emphasis on the value of outsourcing to professionals, and less on blind trust in his own capabilities.

This will also help to see the inherent value in outsourcing as the opportunity cost of not doing so might eventually end up being greater. Lastly, Alexander should invest in a property where the reward  is worth the risk, and make more conservative estimates to determine profitability. By following these steps, I believe he will be able to successfully gain the experience and equity base in real estate that he was seeking. 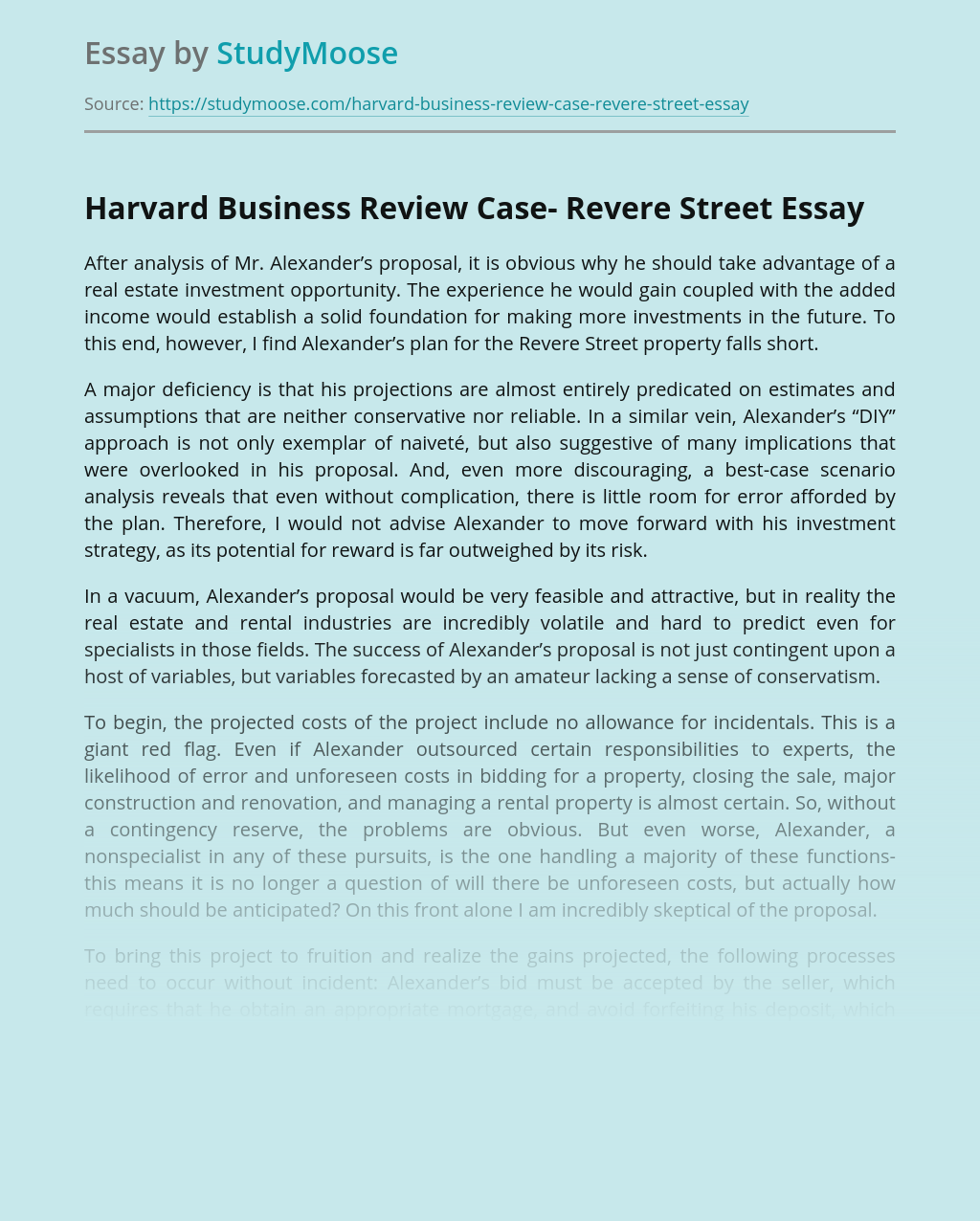 Turn in your highest-quality paper
Get a qualified writer to help you with
“ Harvard Business Review Case- Revere Street ”
Get high-quality paper
Helping students since 2015
Stay Safe, Stay Original