The rapid and enormous expansion of Wal-Mart and its market share have changed the landscape of Main Street in towns and cities across America. By 1981, Wal-Mart became Americas largest retailer. It has approx. 6,700 stores worldwide, $345 billion in net sales (2007), and roughly 100 million weekly customers. Wal-Marts massive footprint has had three primary areas of concern: 1) Putting local small business merchants out of business

2) The creation of urban sprawl
3) Traffic congestion
• Largest purchase made from overseas which forced local manufacturers out of business.

Turn in your highest-quality paper
Get a qualified writer to help you with
“ Case Study Analysis of “Wal-Mart: the Main Street Merchant of Doom” ”
Get high-quality paper
NEW! AI matching with writer

• Most sued company in America in respect of lawsuits.

In the mid 1980′s, Wal-Mart was becoming responsible for the loss of American jobs due to the sheer volume of foreign purchases from its overseas vendors. The company was contacted by then Gov. Bill Clinton and he requested that they devise a plan to support American manufacturing. Wal-Mart responded with a “Buy American” program to support American manufacturers, but the plan was eventually abandoned.

Wal-Mart is currently the largest purchaser of Chinese products. This shift in policy caused the loss of American manufacturing jobs once again.

The aggressive marketing of Wal-Mart, its purchasing power and intent to provide very inexpensive goods to the consumer has shut down many local merchants. Even with continued resistance in many communities, Wal-Mart has continued to expand worldwide in brute force. The varying cultures across the globe that Wal-Mart attempts to move into have also proven to be very resistant.

There have been cases of Wal-Mart not respecting the language or culture of the respecting community and they have closed their doors or
taken a different approach including the purchase of well known local chains to retain a familiarity and business model that works.

The primary social stakeholders of Wal-Mart are the citizens in the community, local consumers, employees, local environment, American manufacturers, local small business and shareholders.
The secondary social stakeholders are the local, state and federal government (state and federal due to Wal-Mart’s enormous financial impact on the U.S. Economy and its lobbying power), anti-Wal-Mart activists (including local community activists, broad-based activists against the spread of “The Wal-Mart Way”, and environmental activists), the media.

Ethical Responsibilities: Take into consideration the impact on local small businesses of the communities it moves into, listen and respect the wishes, concerns and cultures of those communities, reduce environmental impact.

Philanthropic Responsibilities: Give back to the community and environment equal to or greater than what it has taken, continue to fund charities such as scholarships in proportion to the growth of Wal-Mart and its net profit.

COURSES OF ACTION/ALTERNATIVES:
• It can save the local manufacturers from the episodes of global recession. But if purchases are made from other countries there are alternatives for a company. • A revision should be made in respect of the benefits of the
employees, which may render many jobless. • Need to focus on development of employees irrespective of their gender. If not then there will be male dominant workforce and will effect the reputation of the company. • Appoint a specialist team to detect the route cause to avoid future lawsuits against the company.

VALUATION/SELECTION OF BEST ALTERNATIVE:
• Give an opportunity to small merchants to work with the company and it can be proved useful. • Provide good benefits to the employees so that they are motivated to work loyally. • Form an alliance with an external party to help solve the problems of the employees. • Stop employing employees who prove to be a liability for the company. • Avoid cheap labor by not employing illegal immigrants.

IMPLEMENTATION PLAN:
• Purchasing from the local market at a reasonable price will lead to good business relations. Will increase the market 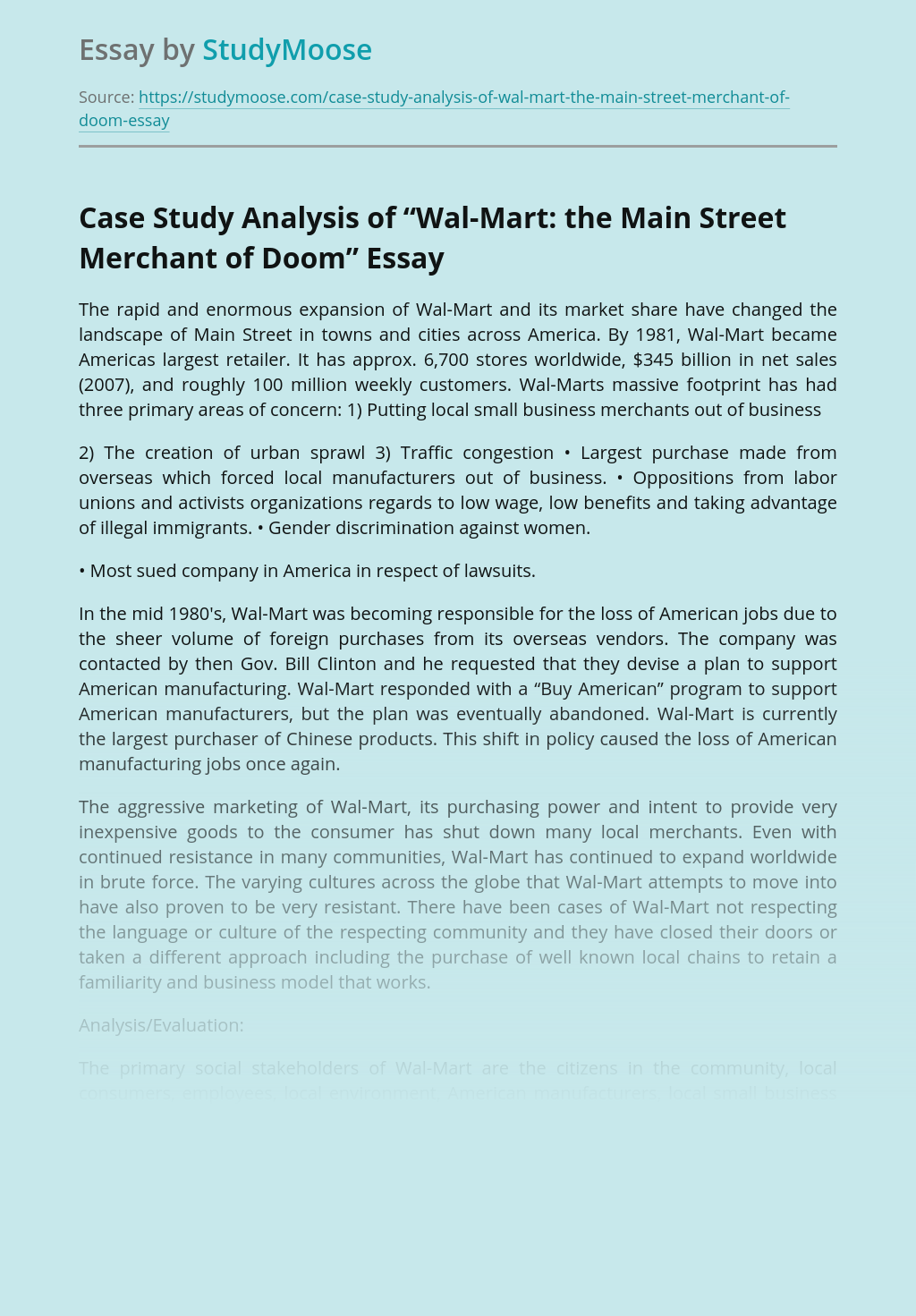 Turn in your highest-quality paper
Get a qualified writer to help you with
“ Case Study Analysis of “Wal-Mart: the Main Street Merchant of Doom” ”
Get high-quality paper
Helping students since 2015
Stay Safe, Stay Original