The degree of control over prices which the companies may exercise varies widely with the competitive situation in which they operate. Sellers operating under conditions of pure competition do not have any control over the prices they receive. A monopolist, on the other hand, may fix prices according to his discretion. Sellers operating under imperfect competition may have some pricing discretion. The marketer, therefore, needs to know the degree of pricing discretion enjoyed by him.

Wal-Mart is selling varieties of items and one of these is Toys.

Don't use plagiarized sources. Get your custom essay on
“ Control Over Prices ”
Get custom paper
NEW! smart matching with writer

Perfect competition is said to exist when (i) there are a large number of buyers and sellers, (ii) each purchasing and selling such a small quantity that their withdrawal from the market will not affect the total demand and supply, (iii) the products sold by sellers are homogeneous in nature.

In pure competition, all that the individual seller can do is to accept the price prevailing in the market, i.e. the company is in the position of a Price Taker.

If it wants to charge a higher price, buyers will purchase from other sellers. And it need not charge less since it can sell its supply at the going market price.

Under monopoly, a single producer has complete control of the entire supply of a certain product.  The main features of monopoly are (i) there is only one seller of a particular good or service and (ii) rivalry from the producers of substitutes is so remote that it is almost insignificant. As a result, the monopolist is in a position to set the price himself. Thus, it is in the position of a Price Setter.

Even in the case of monopoly, there are limits to the extent to which it can increase its prices. Much depends on the elasticity of demand for the product. This, in turn, depends on the extent of availability of substitutes for the product. In most cases, there is rather an infinite series of closely competing substitutes. Bigger organizations must take into account potential competition by alternative services. The closer the substitute and greater the elasticity of the demand for a monopolist’s product, the less it can raise its price without frightening away its customers.

Monopolies are constantly tending the break down due to many reasons: (i)shifts in consumer demand, (ii) continuous process of innovations and technological developments leading to development of substitutes, (iii) lack of stimulus to efficiency provided by competition, (iv)entry of new competitors.

It is a type of strategy applied by the company where the item is sold below the cost price in an effort to balance other profit sales. It is just another way of promoting sales of the products which are slow moving or to counterbalance some other competitive firm.

It is the market situation characterized by a few sellers each having an appreciable share in the total output of the commodity. In each of these industries, each seller knows his competitors individually in each market.

Each company realizes that any change in his price and advertising policy may lead rivals to change their policies. Hence, Wal-Mart may consider the possible reactions of the other firms to its own policies. The smaller the number of firms, the more interdependent are their policies. In such cases, there is a strong tendency towards close collaboration in policy determination both in regard to production and prices.

Such type of  industries are usually characterized by what is known as price leadership—a situation where firms fix their prices in a manner dependent upon the price charged by one of the firms in the industry,i.e.,Toys R Us, called the price leader. The price leader has lower costs and adequate financial resources, a substantial share of the market and a reputation for sound pricing decisions. Price leaders with the strongest position in the market may often increase their prices with the hope that competitors will follow suit. Price followers may also delay raising their prices in the hope of snatching a part of the market share away from the leader.

Monopolistic competition is a market situation, in which there are many sellers of a particular product, but the product of each seller is in some way differentiated in the minds of consumers from the product of every other seller. None of the sellers is in a position to control a major part of the total supply of the commodity but every seller so differentiates his portion of the supply from the portions sold by others, that buyers hesitate to shift their purchases from his product to that of another in response to price differences. At times, one manufacturer may differentiate his own products.

Wal-Mart sells toys of many brands. This differentiation of product by each manufacturer by giving it a brand name gives him some amount of monopoly if he is able to create goodwill for his product and he may be able to charge higher prices thereof to some extent. Still, his product will have to compete with similar products of other manufacturers which puts a limit on his pricing discretion. If he charges too high a price, consumers may shift their loyalty to other competing suppliers. One can find it out by going to the market, as a large number of toys are subject to a large degree of product differentiation as a means of attracting customer.

As long as a consumer has an impression that a particular product brand is different and superior to others, he will be willing to pay more for that brand than for any other brand of the same commodity. The differences real or illusory may be built up in his mind by (a)  advertising, and (b) his own experience and observation. The producer gains and retains his customers by (a) competitive advertising and sales promotion, (b) the use of brand names quite as much as by (c) price competition.

Product differentiation is more typical of the present day economic system, than either pure competition or monopoly. And, in most cases, a firm has to face monopolistic competition. It tries to maintain its position and promotes its sales by either (i) changing its price and indulging in price competition, or (ii) intensifying the differentiation of its product, and (iii) increasing its advertisement and sales promotion efforts.

Instead of the cost, the emphasis here is on the market. The firm adjusts it own price policy to the general pricing structure in the industry. Where costs are particularly difficult to measure, this may seem to be the logical first step in a rational pricing policy. Many cases of this type are situations of price leadership. Where price leadership is well established, charging according to what competitors are charging may be the only safe policy.

Normal pricing is not quite the same as accepting a price impersonally set by a near perfect market. Rather it would seem that the firm has some power to set its own price and could be a price maker if it chooses to face all the consequences. It prefers, however, to take the safe course and conform to the policy of others.

Prices of certain goods become more or less fixed, not by deliberate action on the sellers’ part but as a result of their having prevailed for a considerable period of time. For such goods, changes in costs are usually reflected in changes in quality or quantity. Only when the costs change significantly the customary prices of these goods are changed.

Customary prices may be maintained even when products are changed. For example, the new model of toy may be priced at the same level as the discontinued model. This is usually so even in the face of lower costs. A lower price may cause an adverse reaction on the competitors leading to a price war so also on the consumers who may think that the quality of the new model is inferior. Perhaps, going along with the old price is the easiest thing to do. Whatever be the reasons, the maintenance of existing prices as long as possible is a factor in the pricing of many products.

If a change in prices is intended, Wal-Mart must study the pricing policies and practices of competing firms and the behavior and emotional make-up of his opposite number in those firms. 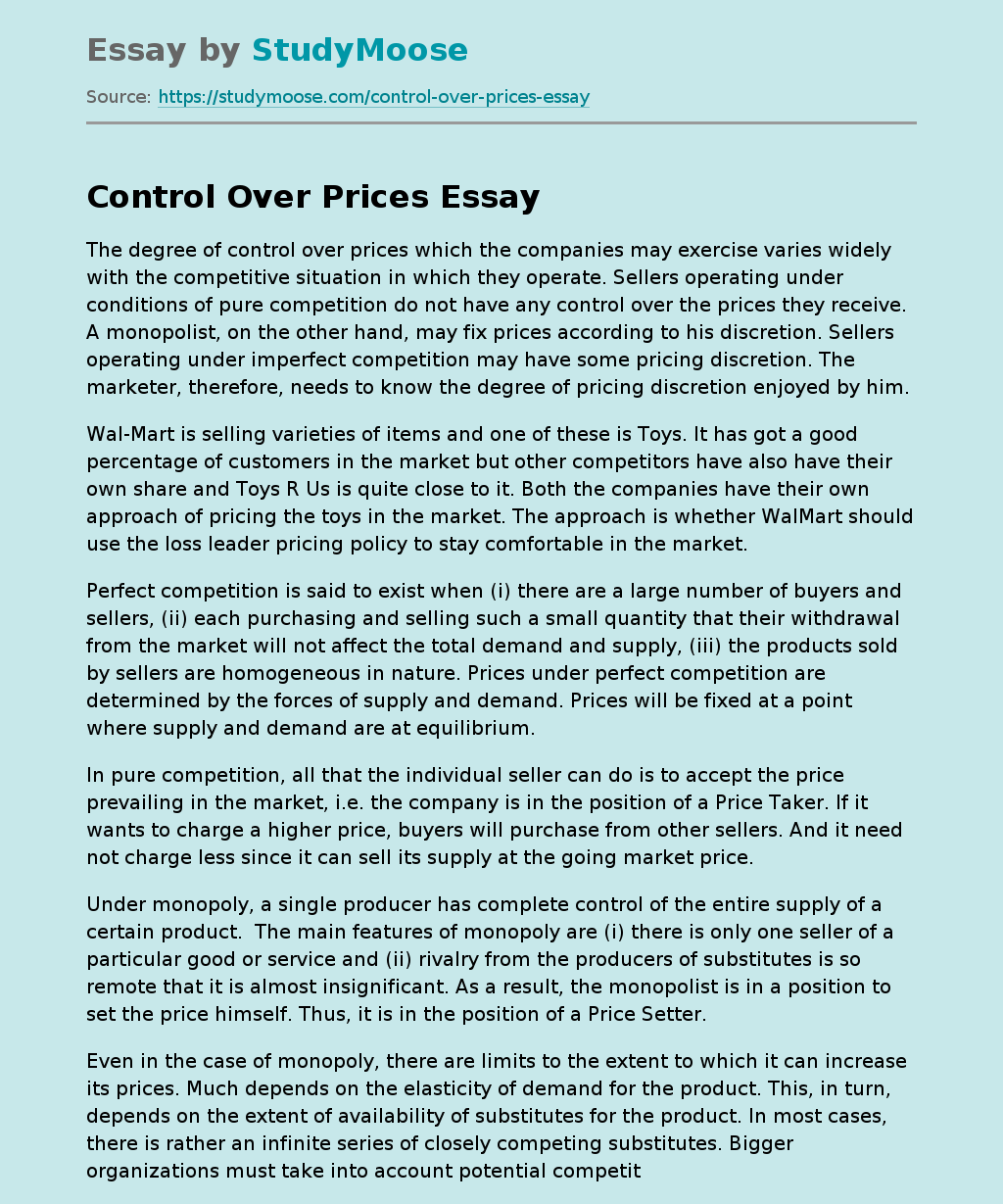