A recent article (Liu Jie, 2008) revealed that restrictions on business numbers, geographical positions and stockholders have been gradually diminished, which can be regarded as a supplement to promises to WTO. As a consequence of market liberalization, foreign retailers have gained rights to compete with domestic companies in Chinese market.

Over recent years, Chinese market has appealed the booming entry to external retail chains and has become a fierce competition region for both foreign and internal companies, including Carrefour and Wal-Mart.

Carrefour and Wal-Mart are well known worldwide largest retail giants recognized as France and America based companies respectively and are battling for the reputation of being the largest foreign retailer in Chinese market with increasing amount of outlets and sales( Moreau and Raphael ,2008).

Turn in your highest-quality paper
Get a qualified writer to help you with
“ Compare and Contrast the Strategies of Carrefour and Wal-Mart in the Chinese Market ”
Get high-quality paper
NEW! AI matching with writer

The purpose of this essay is to compare and contrast tactics of Carrefour and Wal-Mart in Chinese market. Expansion to Second -tier cities

Having faced saturation of marketplaces in first –tier cities, such as richer coastal districts, both Carrefour and Wal-Mart adopted the strategy in 2007 of expanding their hypermarkets into interior regions in China where market development potential and urbanization trend are highly evaluated(Liu Jie, 2008).

For instance, stores of Carrefour in second-tier regions account for almost 40 percent of its entire amount, which illustrates enormous purchasing power in second-tier cities in Chinese market.

In addition, Wal-Mart initiated the expansion to less prosperous regions in Nanchang in 2003 and operated the 100th superstore worldwide in central province of Henan in 2006. Hence, it seems that this strategy displays a satisfying growth opportunity for the foreign retailers in Chinese market. Hypermarket format Different from typical domestic operating channel, notably as supermarkets, Carrefour, like Wal-Mart in China selected hypermarket as their format which accommodates consumers to combination of general shopping and entertainment activities.

Instead of fragmented channels, the hypermarket format is more concentrated and forms multinational chains (Moreau and Raphael, 2008). As a satisfying consequence, rapid growth of sales in 2002 and 2007 has demonstrated that it is a moderate strategy. This may be influenced by costumers’ changes of consuming habit in urban community preferring wider shops and by increasing amount of private cars. Taking Wal-Mart for example, high percentage of its outlets are located in surrounding areas of cities or towns in which consumers have no necessary to worry about parking facilities.

On the other hand, Carrefour simultaneously chose the discount format by starting smaller outlets. However, this multi-format strategy seems inefficient as shortage of customer appeals in private label, which simply obtains lower margins. Eye on medicine retail Carrefour and Wal-Mart are similar in that they both have ambitions to expand to non-food commodities for the purpose of generating profits by accelerating their product ranges. The reasons are probably that both of them are retail giants which have economic strength as well as various distribution channels.

Both Carrefour and Wal-Mart are concerned with medicine retail business, which is a common phenomenon in Chinese market. Because categories of medicines are merely restricted to over-the –counter(OTC) medicines, they are normally supplying medicines to pharmacies at present(Xin hua 2005). As a consequence, competition will be intensified and market will be further regulated in Chinese market with the entry of foreign hypermarket operators. Organic expansion versus large-scale acquisitions

Taking Wal-Mart’s target for example, it has realized the controlling right in the Trust-Mart linkage by 1 billion dollars purchase and proposes to increase the quantity of outlets to double amount in five years’ period. On the other hand, Carrefour and Wal-Mart probably will face the challenge in finding extra primary locations for fresh stores, which has been utilized by domestic companies. Adopting Chinese culture Carrefour and Wal-Mart has an obvious distinction in product assortments in Chinese market, which perhaps generates the different consumers’ recognition of the two.

Wal-Mart does not realize apparent contrasts between American business mode and the Chinese way and struggled with difficulties of less flexible adaptation. Whereas, Carrefour tries to adopt various Chinese culture and localize operating strategies to Chinese mode. For instance, the composition of management teams in China are almost exclusively domestic employees, which encourages Carrefour’s further adaption to local preferences by suitable strategies and practices in per subsidiary.

In addition, Carrefour noticed culture differentiation in ethnic minority regions and never vends pork meat in Urumqi’s Carrefour stores according to the local custom that high proportion of the population is Muslim (Anon, 2007). Hence, Wal-Mart has been less productive than Carrefour in product assortment and adapting Chinese culture. Dissimilar logistic distribution strategies Logistics strategy is another distinct difference between Carrefour and Wal-Mart.

In a recent article (Anon, 2008) it was stated that Carrefour focuses on local distributions and cooperates with regional suppliers who help deliver commodities directly to the retail chains. Less development cost and flexible local distribution network are possibly considered to be main advantages when suffering from challenges of control between quality and service. Unlike Carrefour, Wal-Mart is intending to build a nationwide distribution center in China relied on three distribution centers that Wal-Mart has already owns.

Since supply chain in China currently depends on local basis instead of national load carrier, stores of Wal-Mart may have convenience of receiving products efficiently from its logistics strategy. For example, the distribution centre in Tianjin has been established in 2007, as a result, nearly 90 Wal-Mart stores can benefit from its supply. In conclusion, this essay has considered comparisons of strategies between Carrefour and Wal-Mart in Chinese market.

Similarities are that both of the foreign retail companies have expanded hypermarkets to second tier cities with potentials and have scheduled for medicine retail business. Furthermore, hypermarket format is the main operating channel for their expansion in China. In contrast, tactics of Carrefour and Wal-Mart in logistic distribution? adaption to Chinese culture and expansion preference are obviously different. Whose strategies are preferable? Each could be possible, provided that strategies of the foreign firm and Chinese environment match adequately.

Compare and Contrast the Strategies of Carrefour and Wal-Mart in the Chinese Market. (2017, Jan 05). Retrieved from https://studymoose.com/compare-and-contrast-the-strategies-of-carrefour-and-wal-mart-in-the-chinese-market-essay 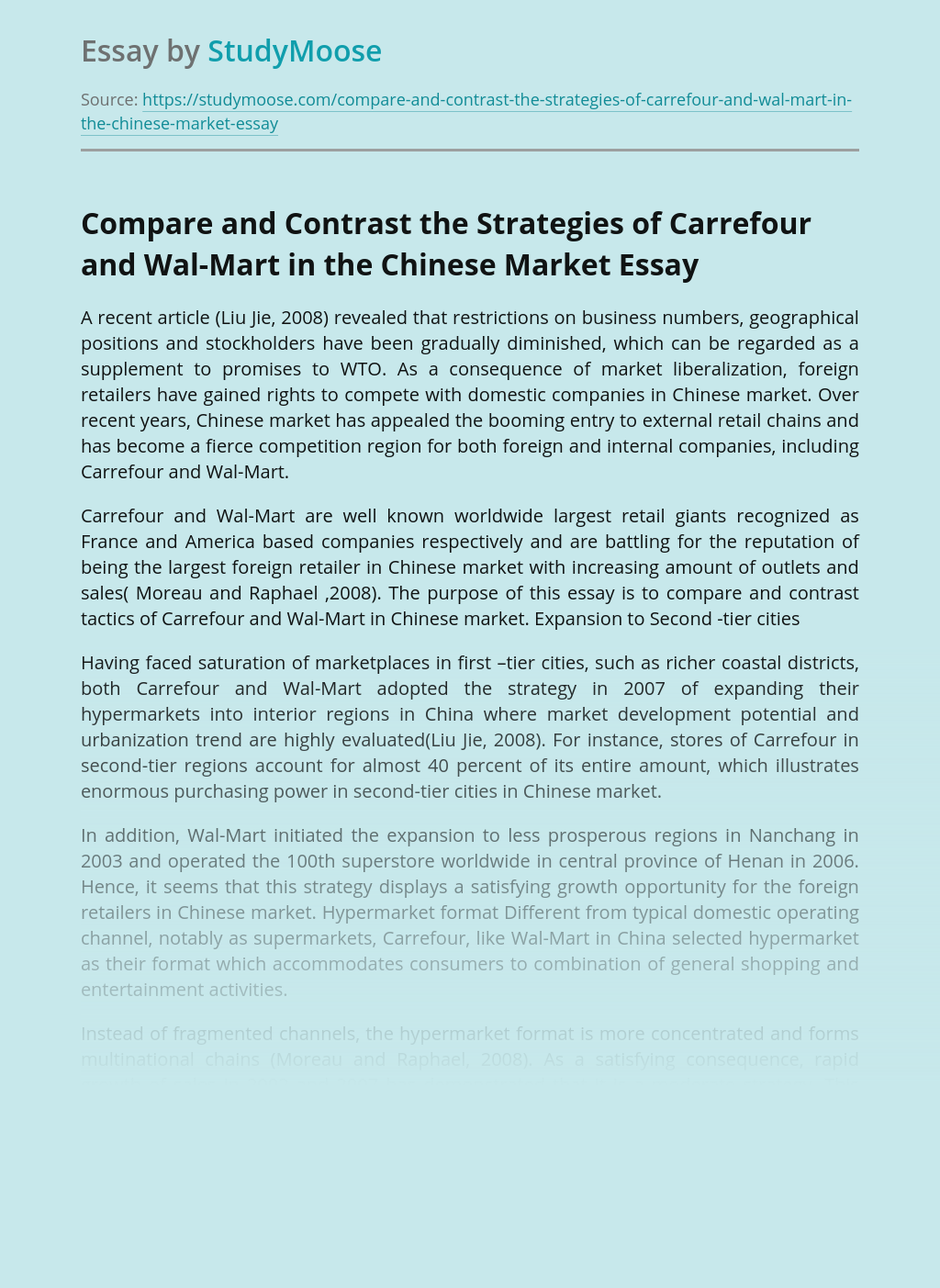 Turn in your highest-quality paper
Get a qualified writer to help you with
“ Compare and Contrast the Strategies of Carrefour and Wal-Mart in the Chinese Market ”
Get high-quality paper
Helping students since 2015
Stay Safe, Stay Original