The incident reported by AP (17 February 2008) and Vogel (17 February 2010) refers to an accident involving illegal street racing that killed eight bystanders in Prince George’s County near Washington. The killer race took place between two racers at 3 am on 16 February. According to the press reports, the two drivers had initially performed ‘burnouts’ where the cars are spun around in low gear, top acceleration but with breaks as this warms up the tires and the engines.

It also creates a lot of smoke due to burnt rubber, smoke that did not go away but gathered like a shroud around 300 bystanders who had gathered to watch the race.

Don't use plagiarized sources. Get your custom essay on
“ Illegal Street Race ”
Get custom paper
NEW! smart matching with writer

When the racers came along the street, they could not see the crowd hidden under the smoke and one of the cars rammed into the crowd at speeds of more than 100 miles per hour, killing eight people and injuring others. Police teams that arrived after the accident used techniques of interviewing the witnesses and those injured to reconstruct the events that took place.

Since identifying the victims was difficult due to the large number of bystanders, the police took digital pictures of the victims and showed them to the people to find their identities. There was no criminal motive behind the crash and the crash was not also pre-mediated murder. The report says that illegal street racing has been popular in the dark back roads of the areas since decades. Racers often modify their cars so that it runs much faster and the prize money can also be very tempting.

However, the main motive for participation is the chance to brag about the win and gain a reputation among the local people (Vogel, 17 February 2010). According to RASR (22 May 2003), young people from different nations have been subjected a false portrayal in movies and computer games that illegal street racing is glamorous. Many of the games such as Need for Speed, Fast and Furious, Burnout, Grand Theft Auto and others portray such deviant behavior as racing on the streets, killing people, running over or beating policemen as an achievement. Added to this is the fact that car racing has a lot of glamour factor with speed and girls.

As a result, youth would willingly take up such races if they have the chance. The motivation for the racer in many cases is to break the law and do something dangerous that people in their group appreciate. The fact that people get killed during a crash does not bother the racer and neither the fact that the racer himself may get killed. Organizations such as RASR – Racers Against Street Racing is made of professional racers who have started a campaign to make illegal street racers to stop such activities and race in legally organized track races.

The important thing about legal track racing is that bystanders are safe and racers have to observe certain rules of behavior. The group is similar to many others who believe that making illegal racers to be aware of the danger is the best deterrent. Policing each and every rural road is simply not feasible. The argument about the quantum of punishment meted out to drivers of such races that crash and kill people needs some consideration.

All these years, in USA, the quantum of punishment was not very strict and the killer driver would have his license impounded, the vehicle destroyed followed by a light jail sentence. However, with increasing number of illegal racing accidents, the law has become much stricter. Robert Caizalez of California and his competitor who killed 3 people in an illegal race in 2009 were sentenced to 48 years and 45 years to life. In Saudi Arabia, an illegal street racer who killed 2 people was not only sentenced to be lashed 3000 times but also 20 years jail.

These laws seem very strict but they are required to act as a deterrent for illegal street racers who kill children as well as the elderly. So on the face of it; I would argue that such strict and harsh rules are important to keep the streets safe. However, the counter argument would be that the culture of creating a glamorous image of street racing through violent and deviant video games still continues unpunished. The firms that make such games are not penalized and neither is any study done on how such games influence people to take up illegal street racing.

While killers should be punished, the government and the courts should empower the police force to stop the sale of such violent games. More than strict and severe sentencing, what is needed is counseling and creating an atmosphere where the racers themselves come to terms with their deeds is important. Over speeding happens every second on the road and deaths also occur but the drivers are not sentenced to 48 years to life in prison. A proper and balanced view must be taken by the honorable courts to create deterrence through strict sentencing and also through counseling. 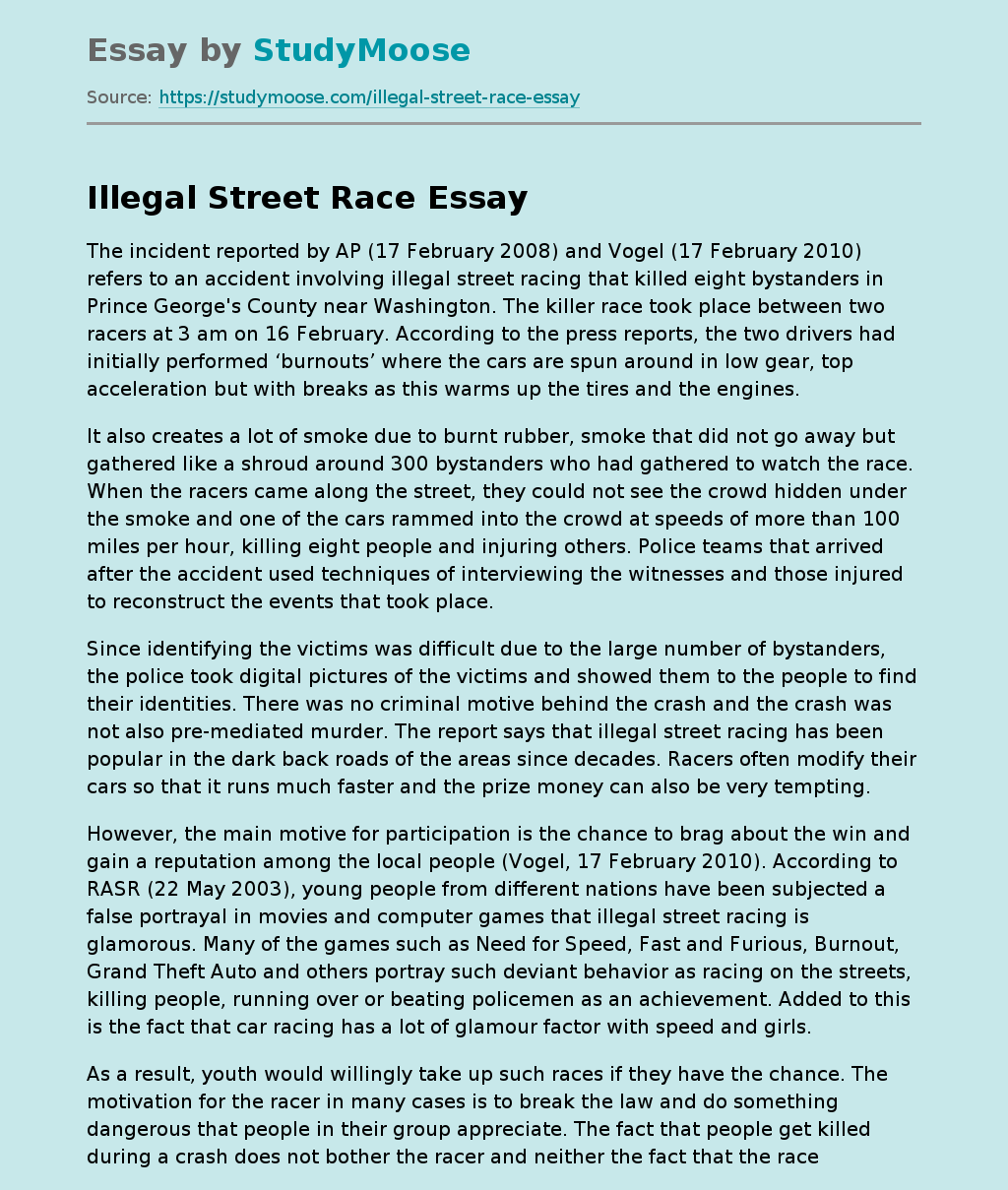